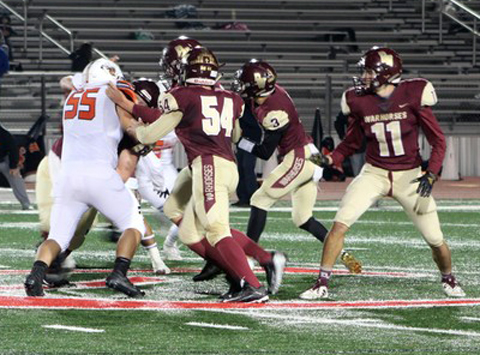 Eighteen years in a row the Devine Warhorse football team has qualified for the state playoffs making its streak one of the longest in all of Texas. The Warhorses captured the District 14-4A DII championship with a perfect 5-0 record in conference play to advance to the bi-district round against a now-healthy Llano team that went 2-3 in District 13-4A DII.
At times, matchups in playoff games can favor a district champion just as it can favor a fourth place team. Unfortunately, for Devine, this was one of those unfavorable times.
Llano was completely healthy for the first time over the last several weeks of the season giving the Yellowjackets an opportunity to showcase their top players altogether in a long time. Five of Llano’s seven touchdowns came via the pass helping them to the 48-21 victory and the right to move on to the Area round against Sinton.

Devine Head Coach Paul Gomez commented after the game, “Obviously, we were striving for a better outcome. It was a tough loss for us. We knew going into the game Llano had a good offense that consistently put up points all year. We had a Plan ‘A’ and a Plan ‘B’ defensively to mix it up but they put up two quick scores on us. We answered back to make it 14-7 and had them stopped but we were assessed a roughing the passer penalty that bailed them out and kept their drive alive. They ended up scoring on a crossing route as we struggled defensively during those first two scoring drives.”
The Warhorse loss was not due to effort on anyone’s part. As Gomez stated, Devine had a couple different plans in place to try to slow the high-powered offense of the Yellowjackets. It just so happens that Llano was the better team on this particular evening.
“We jumped into some two-deep zone and two-deep man under to prevent the big plays and had some success but they made more plays then we did. Offensively, we missed some scoring opportunities that we normally take advantage of due to lack of execution. Even though Llano had a very quick defense, we were a block away from having good gains all night. We just never really got going offensively and of course having the defense out there for a long time really wore us down. We fought hard all night and never quit.”
Except for the teams that get to play in Arlington at AT&T Stadium in late December and walk off the Cowboy’s home field with a season-ending victory, the outcome of the final ballgame of the season is never what any coach and player dreams of which is a state championship.
No one is harder on themselves after a loss than the coaches in Devine are. After every loss, there is always a direct reflection in the mirror with the internal question “What could I have done better?” Even though this town loves their Friday night Warhorses, sometimes the other team is just a little bit better.
“Obviously, I feel like I let the boys down,” Gomez continued. “For whatever reasons we did not have our best outing on Friday and ultimately that is my fault. If any blame needs to be assessed on the loss then that falls on my shoulders.”
For fifteen Devine footballers, not only has their district championship season come to a close, it was also the last time they get to step onto the playing field with this current group of Warhorse players. After season ending loses, the fact that some will never be in the dressing room or go to battle again hits as hard if not harder than the loss itself.

Gomez and his staff appreciate what all players do for the football program. He took time to say, “I would like to thank the seniors for their leadership and dedication this year. It was truly an honor to coach these young men. I hope they leave this program as not just better competitors but most importantly better people with tools to overcome life’s obstacles. Our football team was so much fun to coach. Our coaches really enjoyed coaching these guys. These boys worked their tails off and dedicated so much time to our program. We have some great young men representing our school and I am very proud of them. We truly love each one of them.”
Warhorse Nation has supported all DISD programs greatly over the years. When players see the stands full and hear the vocal support that rings from the stands, it gives them more motivation to perform at their best. Many supporters have a genetic connection to one or more of the players that don the maroon and gold; other community members attend because high school football is the best thing going on Friday nights for small towns.
“I would like to take the time to thank the parents for support this year,” said Gomez. “From pregame sandwiches and snacks, to team dinners, to decorating our locker room, these parents are second-to-none. We have good, hard working players here because they have been raised the right way. We are definitely blessed to live in a community that supports our kids. This town gives so much to our kids and it is just a great place to live. Devine, Texas. Small town, big heart! I wish it could have been a different outcome, especially for these young men and this community. It was a very emotional moment as we left out to New Braunfels and seeing all these fans parked and cheering us as we left Devine. I hope we as coaches can do better and bring much more success for our football program. Our kids deserve it and this community deserves it.”
Looking back
The 48-21 bi-district loss should not be the basis of judgement for this Warhorse team. After a 1-4 start to the season, Devine reeled off five consecutive victories to capture the District 14-4A DII championship.
Devine’s season ends with a 6-5 record including its unblemished 5-0 district record.
The already overcrowded Warhorse trophy case will now make room for one additional gold football.
By Jerel Beaty
Staff Writer