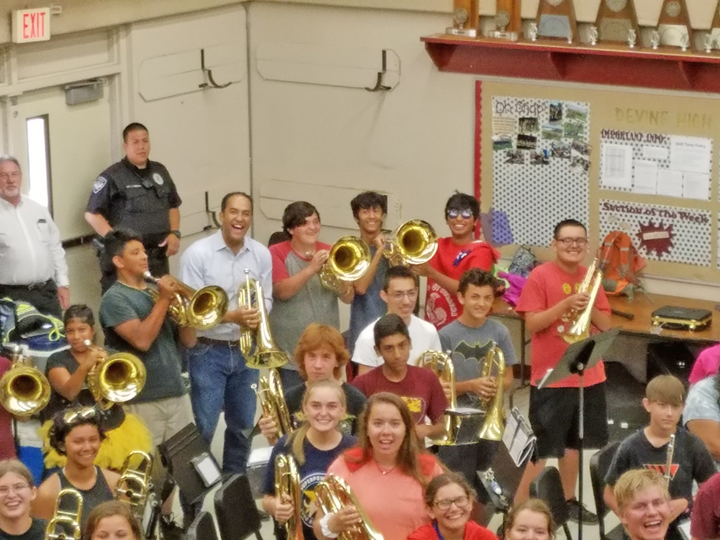 CLICK HERE to See More Photos of This Event

By KK Calame-Publisher
Congressman Will Hurd jammed with the baritones and the Warhorse band on his stop in Devine during his “DC2DQ” tour.

He hosted a town meeting at Dairy Queen on Friday, August 11. About 100 people were in attendance as he listened to and addressed concerns from tour followers and some locals when they could get in a question about water concerns, veterans, and more.

Respectfully he addressed all and then dropped in for a surprise visit to the Devine High School Band Hall. Congressman Hurd was invited to conduct the marching band and opted to play with them instead.

After a photo shoot with the largest student group at DHS (130 students) under the direction of Director Jeff Miller and staff, Hurd encouraged the kids to keep up the great work and challenged them to put in 10,000+ hours of practice on their dreams, like many successful people have done before them giving examples from all walks of life.

He and the band had a lot of fun, a refreshing break from the town meetings, and walked out smiling with a promise to return marching season as they gave him a great drum line sendoff!