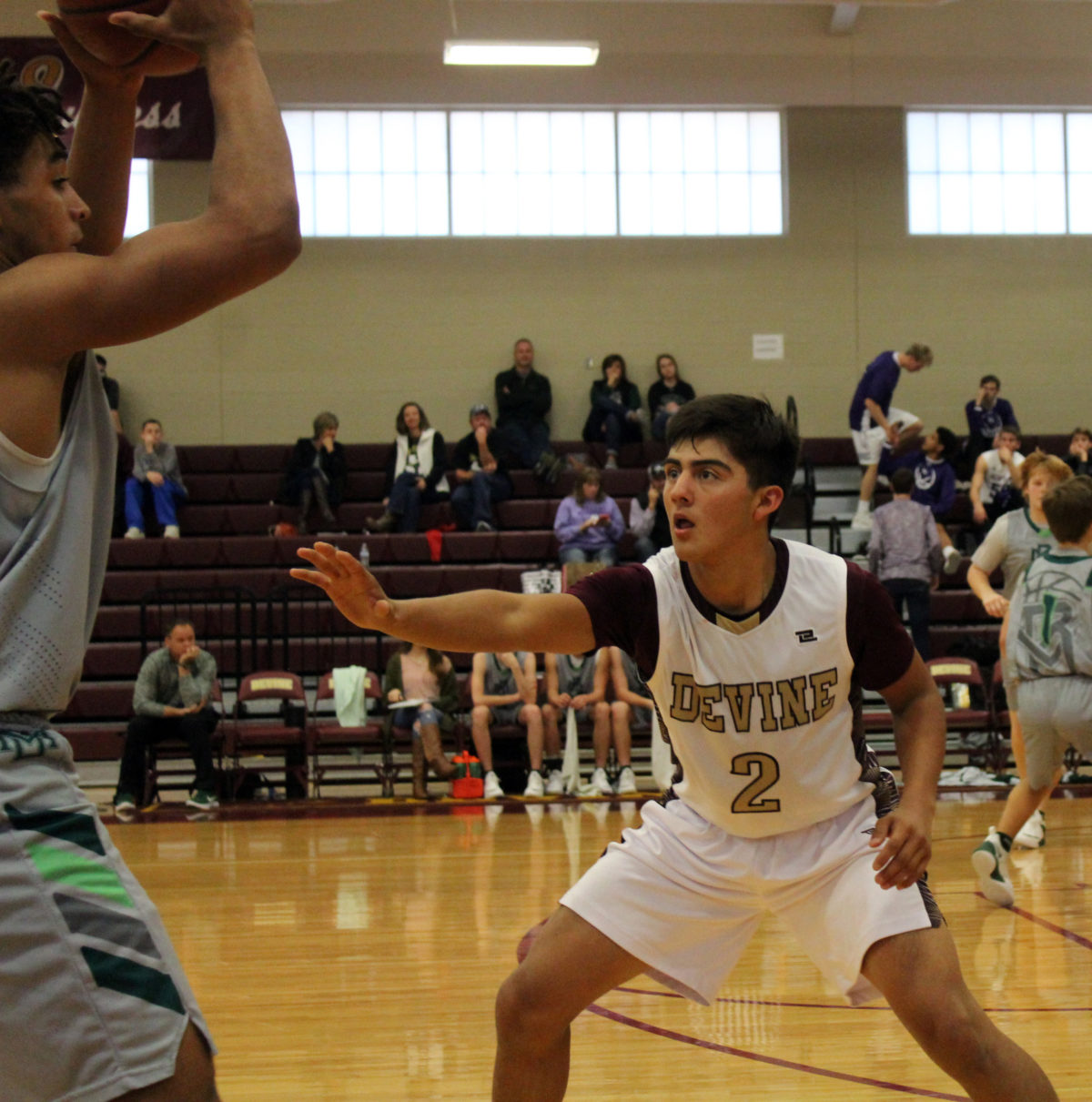 Ingram was no match for the Varsity Warhorses last Tuesday. With a final score of 63-39, the Warhorses played hard and fast not giving up any of the opponent’s points easily. Daniel Ramirez led the charge with 24 points, Jacob Oyola 9, Marques Burford 7, Brady Cardenas 6, Dalton Kramer 6, Justin Conteras and Cash Walker 4 each and Leonard Pompa 3.
Devine Tournament
At the Devine tournament the Warhorses played a large pool and came away with third place. Cole won first and Boerne got second. Playing five tough games over three days was a big challenge for the Varsity team.
Boerne was the first opponent and proved to be a tough opener for the Warhorses. The final score was 44-70 in favor of Boerne. Cash Walker scored 14, Leonard Pompa had 9, Jacob Oyola 8, Daniel Ramirez 7, Brady Cardenas, Justin Conteras and Dalton Kramer each had 2 points.
Mathis was knocked down easily by the Warhorses with a final score of 81-54, taking off hard in the first quarter leading 18-14. In the second quarter the lead extended to 41-28. Mathis tried to catch up in the second half but could not keep up with the Warhorses determination. Ramirez put up 25 points, Oyola had 14, Walker 12, Cardenas 8, D. Kramer 5, Pompa, Conteras, and Sid Martinez each with 4, Tristan Kramer 3, and Marques Burford had 2 points.
Uvalde was able to stop the Warhorse’s drive with a final score of 71-58. Walker led with 24 points, Ramirez 14, Conteras 11 Oyola 10, Pompa 9, D. Kramer had 3.
Fueled by that defeat, Blanco pushed hard but Devine pushed even harder. The Warhorses won 58-53. Only four Warhorses scored but all were in double digits. Walker scored 20, Oyola had 16, and Pompa and Ramirez each had 11.
In the final game against Marion, the Warhorses continued their push for victory and won 55-50. Tied at the end of the third quarter with 36 each, the varsity team pushed hard and outscored Marion by 5 points to win 3rd place. Ramirez scored 24 points, Pompa 15, Oyola 7, Walker 6, and D. Kramer had 3 points.
The Warhorses “are learning how to persevere and play through adversity. They played extremely hard and are beginning to play smarter,” said Coach PJ Wells.
Leonard Pompa and Daniel Ramirez were named All-Tournament. Cash Walker and Jacob Oyola played extremely well and deserve to be recognized said Coach Wells but no team is complete without full support from all team members including the whole bench.
The Warhorses head to the Pleasanton Varsity tournament this weekend and then play Bandera at home on Tuesday.
By Dicy Chambers
Sports Writer