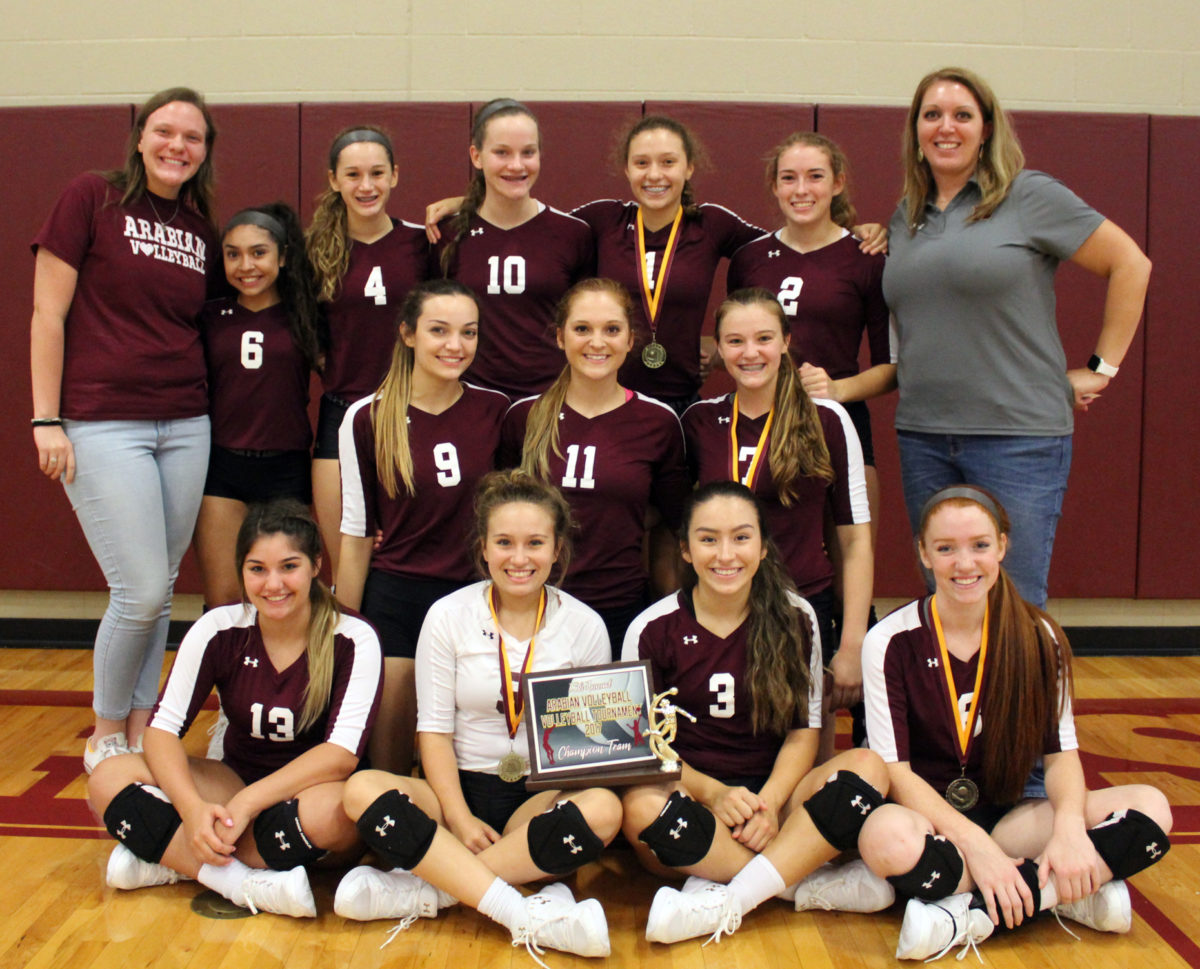 The Arabians won their home tournament, the 16th annual Varsity Arabian Round-up this past weekend. The Arabians defeated all of the 6 teams they encountered including: Highlands (San Antonio), FEAST Home School, D’Hanis, Marion, Pleasanton, and Corpus Christi King.
“I thought we had another successful tournament with lots of good, competitive volleyball being played,” Coach Leigh Ann McIver said.
First up was Highlands where they won in two sets, 26-24 and 25-16. The Arabians served a total of 5 aces: Chesney Friesenhahn 4 and Makenna Morales 1. The team had a total of 29 kills: Sierra Pompa 13, Addie Trojanowski 10, Friesenhahn 5, and Alissa Stehle 1. They also had 29 assists: Trojanowski 17, Sydney Rendon 8, Morales 3, and Friesenhahn 1.
Defensively, Friesenhan had one block. They had a combined total of 39 digs during the game, with Morales 14, Friesenhahn 10, Amanda Richardson 5, Stehle 4, and Dana Aaron, Rendon, and Megan Runyan each with 1.
“This was our first game of pool play,” Coach McIver said. “We came out kind of flat and made lots of errors in set 1, but we got our focus back in set 2 and played more of our game.”
The second game of pool play was against FEAST Home School. The Arabians won in three sets; 22-25, 25-7, and 25-16. Five players added to the 6 aces they scored: Richardson had 2, Trojanowski, Stehle, Morales, and Rendon all had 1 each. The Arabians had 34 kills: Trojanowski 13, Pompa 9, Friesenhahn 8, Runyan 3, and Aaron 1. They had 34 assists: Trojanowski 22, Rendon 9, Morales 2, and Stehle 1.
Friesenhahn had 6 blocks and Pompa had 2 blocks combining for a total of 8 blocks during the FEAST game. They had a grand total of 71 digs: Morales 21, Rendon 16, Trojanowski 10, Friesenhan and Richardson with 7each, Stehle 5, Pompa and Puente with 2 each, and Runyan 1.
“This was a great game!” Coach McIver said. “Once again we made too many costly errors that really cost us in set 1, but the girls found their intensity and aggressiveness before set 2 and came out ready to play. We weren’t giving up on balls and making some great plays. Set 3 was not much different than set 2 and we were able to walk off the court with the win.”
The fourth game and first game of bracket play was against Marion and they won 25-15 and 25-14. With a total of 5 aces were: Friesenhahn 2, Rendon 1, and Julie Ortiz and Trojanowski each with 1. They scored 28 kills: Trojanowski 10, Friesenhahn 9, Pompa 6, and Rendon, Stehle, and Caimee Fowler each with 1. They had a total of 26 assists: Rendon 12, Trojanowski 11, and Morales 3.
Aaron and Friesenhahn each had 1 block. A total of 47 digs were earned during the game: Morales 15, Friesenhahn 10, Trojanowski 9, Rendon 5, Richardson 4, Pompa, Aaron, Stehle, and Runyan each with 1.
“This first game was a good way to start the morning,” Coach McIver said. “I thought the girls did a good job of coming out and controlling the game from the get go. They really put the pressure on Marion and took care of the ball when we needed to score.”
In their second bracket game against Pleasanton they won 25-17 and 25-23. Aces: Friesenhahn 2 and Trojanowski 1. There were 32 kills: Trojanowski 11, Pompa 10, Friesenhahn 6, Runyan 3, Rendon and Stehle each with 1. Four players contributed to the 28 assists: Trojanowski 16, Rendon 10, Morales and Friesenhahn each with 1.
Aaron put up 2 blocks. The Arabian defense came up with a total of 61 digs: Morales 20, Friesenhahn 13, Rendon 8, Richardson 7, Pompa, Aaron, and Trojanowski each with 3, Stehle 2, and Runyan and Puente each with 1.
“We made some great hustle plays and never gave up on a play during both sets,” said Coach McIver. “We once again put the pressure on Pleasanton and we swung on the ball very well and finished the plays when they really mattered.”
The championship game was against Corpus Christi King, and the Arabians won in two sets 25-18 and 25-19. Aces: Richardson 2, Stehle 1, and Morales 1. The Arabians had 30 kills: Trojanowski 12, Friesenhahn 9, Pompa 5, and Stehle and Runyan each with 2. Assists: Rendon 12, Trojanowski 11, Morales 2, and Stehle and Friesenhahn each with 1.
Defensively, Friesenhahn put up 3 blocks. They also had 53 digs: Morales 14, Friesenhahn 12, Stehle and Trojanowski each with 6, Rendon and Richardson each with 5; Pompa 3, and Aaron and Runyan each with 1.
“We came out serving very aggressively in this match and that really got CC King out of their offensive rhythm. It did take us a few plays to get going and understand what they were doing on offense, but we ended up picking up their tendencies and really making some great plays after we picked the ball up defensively,” said Coach McIver. “I am very proud of the way the girls played during these games. They came in with the goal to win this tournament and they kept their focus and met their goal.”
All Tournament Team
Devine: Addie Trojanowski (MVP), Chesney Friesenhahn, Makenna Morales, Sierra Pompa; CC King: Landen Ross, Serrena Flores; Highlands: Marissa Rivera; Pleasanton: Laken McAda; Jourdanton: Savannah Bronstad.
By Abby Kohlleppel
Staff Writer