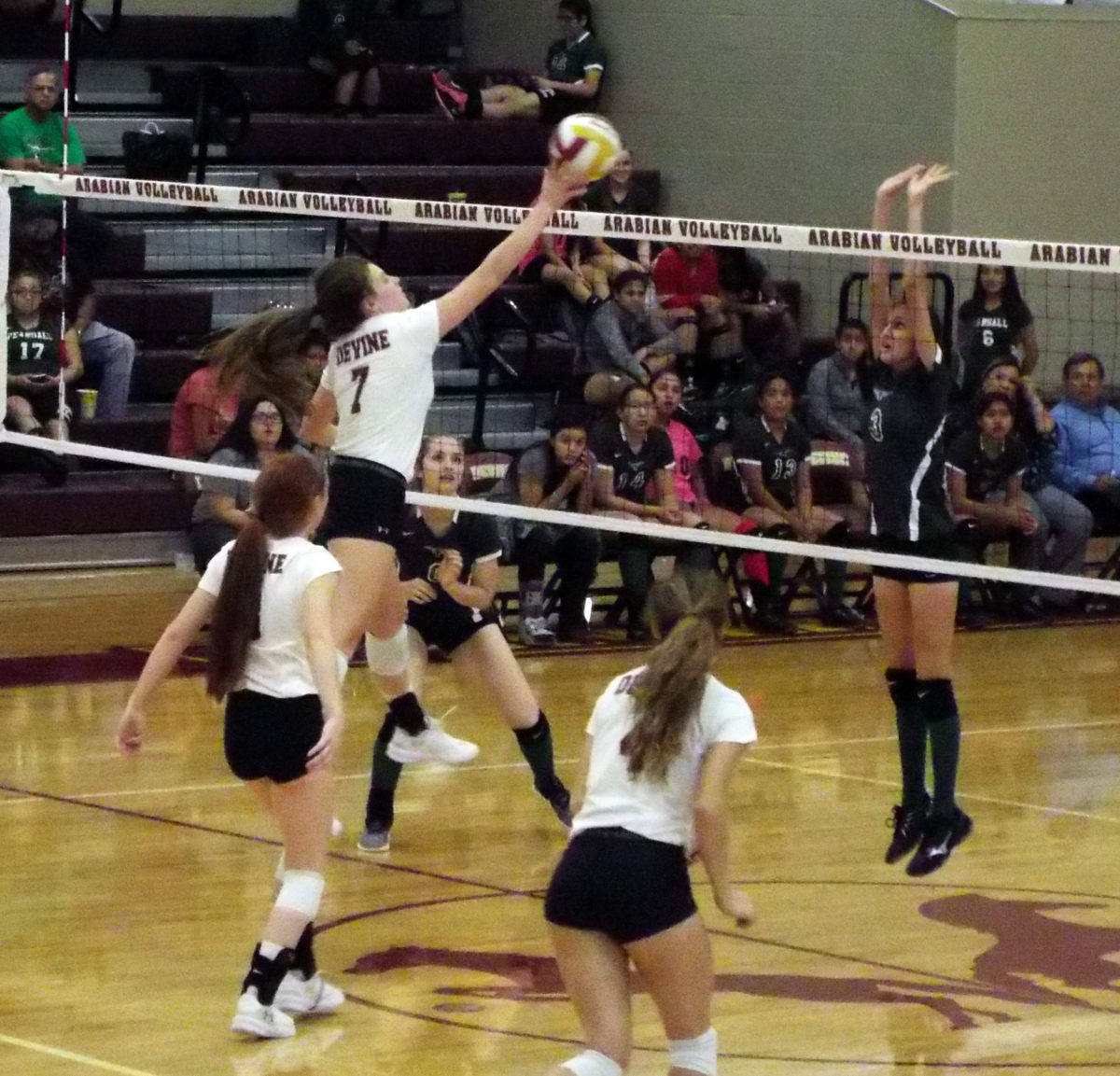 The Varsity Arabians played and won against Pearsall and Carrizo Springs leaving them 6-0 in District play.
“The girls have been taking care of some business,” Coach Leigh Anne McIver said. “These games are putting us one step closer to our goal: district champions.”
Pearsall
The Arabians won in three games, 25-8, 25-10 and 25-11.
Offensively the Arabians had 10 aces against Pearsall; Makenna Morales 5, Chesney Friesenhahn 2, and Sydney Rendon, Alissa Stehle, and Addie Trojanowski each with 1. The girls had 42 kills led by Sierra Pompa with 18. Others assisting with the kills were Friesenhahn and Trojanowski each with 8, and Dana Aaron, Stehle, Caimee Fowler, and Megan Runyan each with 2. There were 37 assists; Trojanowski 20, Rendon 15, and Morales 2.
Defensively, the only block of the night was made by Friesenhahn. The girls had 31 digs led by Morales with 12 and followed by Friesenhahn and Trojanowski each with 6, Rendon 3, Stehle and Julie Ortiz each with 2.
“Even though we didn’t play our best, we ended the night with a win,” Coach McIver said. “We had too many serving errors and at times didn’t communicate well but I thought our offense did a great job of ending the rallies and earning the point.”
Carrizo Springs
The Arabians beat Carrizo Springs in three games, 25-11, 25-11 and 25-11.
Offensively, the girls had 12 aces; Friesenhahn 4, Richardson 3, Trojanowski 2, and Aaron, Rendon and Fowler each with 1. They scored 43 kills; Trojanowski 13, Pompa 12, Friesenhahn 10, Runyan 5, Fowler 2, and Aaron 1. Assisting was Rendon 16, Morales 6, Trojanowski 20, and Runyan 1 for a total of 43.
Defensively, the girls had 53 digs led by Morales with 20. Others adding to the digs were Trojanowski 8, Friesenhahn 6, Rendon 5, Richardson and Elizabeth Puente with 3 each, Pompa 2, and Aaron, Fowler and Runyan each with 1.
“Even though we made some unforced errors, the girls really hit the ball well and our hitting percentage might have been the highest it has been all year,” Coach McIver said.
By Abby Kohlleppel
Staff Writer