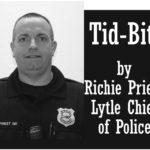 I can taste Thanksgiving dinner already, it sure is hard to believe it is November. On to the important stuff….We had 51 calls for service last week, all in all, it was slow.
Last Monday morning started strangely, we had two vehicle burglaries reported. The first one happened at John Lott Park. Our victim was walking and somebody broke out a window and took a purse from the back seat. They then used a stolen card at AutoZone to purchase some vehicle parts. The burglary occurred between 7:15 AM and 8:45 AM. The other burglary, which appears unrelated, occurred at the Lytle Apartments sometime during the early morning hours. A purse was taken from an unlocked vehicle. The unknown suspect tried to use the victim’s debit card at H.E.B. but it was declined. If some crook got into my wallet they might get the same results. If it is possible please don’t leave valuables in your vehicle, if you must then at least hide the heck out of them. Make these crooks work for it.
On Monday evening Lt. Dear respond to the H.E.B. for a shoplifter. A 17-year-old female was confronted by employees after she took a cosmetic item valued at $3. She decided to provide a false name and D.O.B. to Lt. Dear and she had lots of chances to remedy the situation. She ended up getting arrested for failing to ID/providing false identifying information. A bad choice led to a trip to the county jail, this could have been easily avoided. It was our only arrest for the week.
On Wednesday Ofc. A. Lopez and Cpl. Robison were out checking out the old Bealls parking lot and recovered a stolen P/U. The 2020 Ford F-150 was reported stolen out of SA, no doubt it was dumped so another crook could pick it up. Good recovery guys!
Nobody knew how Halloween would turn out in this year of “2020.” Well, in Lytle it wasn’t that bad. The number of “trick or treaters” was down for sure, as well as people giving out candy. I am glad to report we didn’t have any problems. My wife and kids even handed out some candy. An elderly neighbor of ours was nice enough to pass off some candy she didn’t want to go to waste. Another neighbor, a fellow named Thomas Cate, said last year he had 700 trick or treaters, this year it was less than 200. The weather was good and it seemed like everybody had a good time, though seeing people in masks is kind of the norm now.