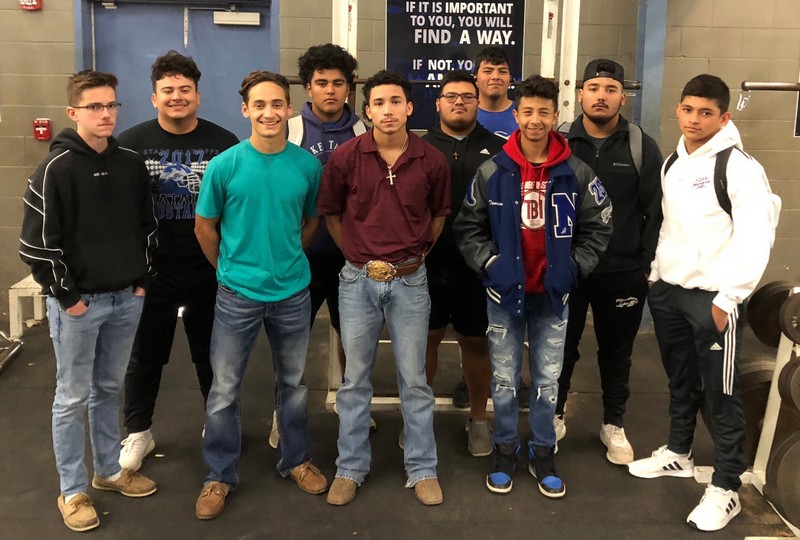 The Natalia Mustang Powerlifting Program will have a strong showing again this week, as they prepare for the Region 5 Powerlifting Meet in Bishop this coming Friday. This season, eight Mustangs have qualified for the regional meet as two will travel as alternates.
The team will be led by senior veteran lifters Manny Padilla and Ryan Juarez.
“We are taking a great group of young men to compete for another regional title,” Coach Kasey Crowther said.
The following is what Coach Crowther had to say about each of the ten Mustangs. We will also look where they rank in the region in their weight class and what their season best lifts and totals have been this far:
Donovan Hawkins, Sophomore Ranked 14th in the Region, 114 Wt Class:
“Donovan will be an alternate this year for the regional meet. He has shown up every day and put in the work to give himself a chance to compete at the next level. If he gets a chance he will be ready to seize the opportunity to help his team out.”
Best Lifts Squat-285lb, Bench-150lb, Deadlift: 285lb, Total: 720lb.
Noah Gilkey, Freshman Ranked 15th in the Region, 123 Wt Class:
“A newcomer this year, Noah, has embraced the championship mindset and earned an alternate spot for the regional meet. We are hopeful he will get a chance to help his team compete for a regional championship. “
Best Lifts: Squat-280lb, Bench-145lb, Deadlift-265lb, Total: 690lb.
Manny Padilla, Senior Ranked 1st in the Region, 132 Wt Class:
“Manny is making his 4th consecutive appearance at regionals. Manny is a former regional and state champion that knows what it takes to compete for gold. He is the outspoken leader that the entire team looks to for advice and encouragement. We are excited to see Manny has in store for the best in the region and are hopeful that he will secure a spot at the state meet.”
Best Lifts: Squat-475lb, Bench-235lb, Deadlift-470lb, Total: 1180lb.
Ryan Juarez, Senior, Ranked 8th in the Region, 132 Wt Class:
“Ryan another four year lifter will be competing at his 3rd consecutive regional meet. Ryan is one of the hardest working kids in the weight room and leads by example. We load the bar and he lifts the weight no questions asked. Ryan will have to have a great meet in order to help propel us to a regional championship.”
Best Lifts: Squat-375lb, Bench-215lb, Deadlift-400lb, Total: 990lb.
Adrian Vasquez, Freshman, Ranked 6th in the Region, 148 Wt. Class:
“Adrian is another newcomer to the program, but certainly not a new to the regional stage. He has seen his sister set numerous regional and state records, and has it in his mind to continue the success that this program has become accustomed to. We are excited and anxious to watch this freshman compete against the best that this region has to offer.”
Best Lifts: Squat-455lb, Bench-225lb, Deadlift-485lb, Total: 1165lb.
Michael Martinez, Junior Ranked 5th in the Region, 220 Wt Class:
“Mike is another lifter that has competed on the big stage before. Last year he fell short of state competition but this year he hopes to advance to the next round of competition and help his team win a regional championship.”
Best Lifts: Squat-605lb, Bench-280lb, Deadlift-495lb, Total: 1380lb.
Jeremiah Gomez, Junior, Ranked 13th in the Region, 220 Wt Class:
“Jerry is new to regional competition even though he has been lifting for the past three years. He has come to practice and competed at all the meets with one goal get better every day. We were happy to get the news that he will be competing at the regional meet instead of traveling as an alternate.”
Best Lifts: Squat-460lb, Bench-275lb, Deadlift-500lb, Total: 1235lb.
Uriel Arellano, Junior Ranked 4th in the Region, 242 Wt Class:
“Uriel is another lifter that is having a consecutive appearance at the regional meet. A very hardworking soft spoken young man that is all business when he steps in the rack. We are fired up to see what he can do when the lights come on the judge says “bars loaded.”
Best Lifts: Squat-510lb, Bench-400lb, Deadlift-545lb, Total: 1455lb.
Dustin Soto, Sophomore, Ranked 11th in the Region, 242 Wt Class:
“Buda is entering his second year in the program and has seen all the success that a lot of our other lifters have had. This has given him the drive to push through grueling workouts in order to earn a spot at the Regional Meet. He never shies away from any challenge thrown his way. We expect great things from this first time Regional lifter.”
Best Lifts: Squat-500lb, Bench-270lb. Deadlift-505lb, Total: 1275lb.
Paul Billalobos, Junior, Ranked 10th in the Region, 275 Wt Class:
Paul will be making his second straight regional appearance. After not advancing to state competition in the last year he is hungry to prove he is worthy of placing at the regional meet and advancing to state. His hard work is second to none and his full potential has yet to be seen. We are excited to unleash this young man on the best our region has to offer.
Best Lifts: Squat-605lb, Bench-285lb, Deadlift-525lb, Total: 1415lb.
By Eric Smith