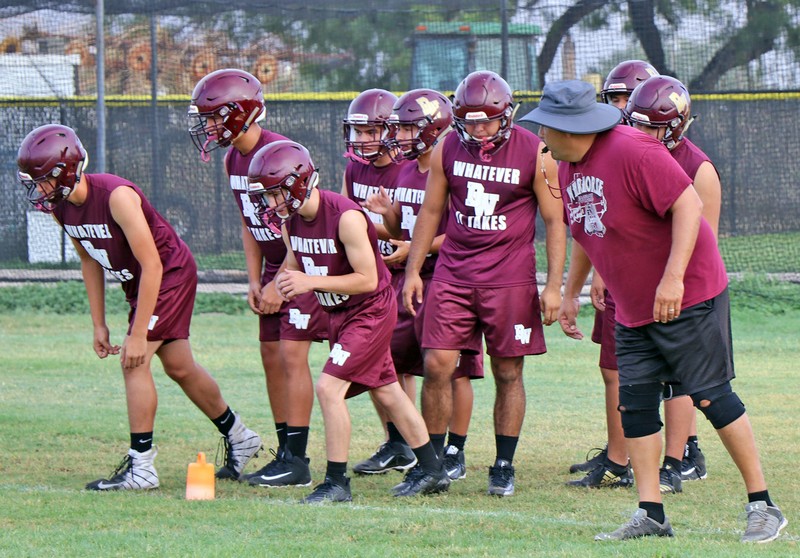 The Devine Warhorses officially began two-a-day football practices Monday. Head Coach Paul Gomez and his staff welcomed approximately 80 student/athletes on that first day. Wearing shorts and t-shirts, the players practiced through the South Texas heat giving all they had to give.
“Football is the best teacher of life,” stated Gomez. “The sport is tough mentally and physically but that is what makes the success so much sweeter. The kids have bought into the program and we had a great first day with everyone being on the same page.”
Being on the same page is vital to kick off a season. Attention to detail, correcting missteps, and fighting through tiredness whether it is mentally or physically is important early in the season.
“Unity, sticking together, is important to us,” continued Gomez. “Little things can win or lose ballgames. Last season, we were about three or four plays away from being in the hunt for a district championship even with all the injuries. Little things changed the tide for us in a big way. The leadership shown by our veteran players early on has been outstanding. Nothing worth getting is ever easy. Every player knows there is a price to pay for being great, and they seem to be up to that challenge.”
Texas Heat
Ruben “Doc” Alston and his student training staff are doing a great job of keeping the players hydrated. There is plenty of water and Gatorade located at several stations around the practice field. Players must continue to consume water and replenish lost nutrients once they have left the fieldhouse after practice. If a player shows up to workout dehydrated, it is extremely difficult to get them back to the hydration level at which they should be.
It’s Not Too Late
More than 80 players attended the first day of workouts for the Warhorses. Those that did not report for the first few days of practice but want to be a part of something special, that want the chance to make lifelong memories and friendships are encouraged to contact Coach Gomez to join up as soon as possible. Each practice is vital to the development of not only the player, but also key to a team coming together to strive for a district championship.
By Jerel Beaty
Staff Writer