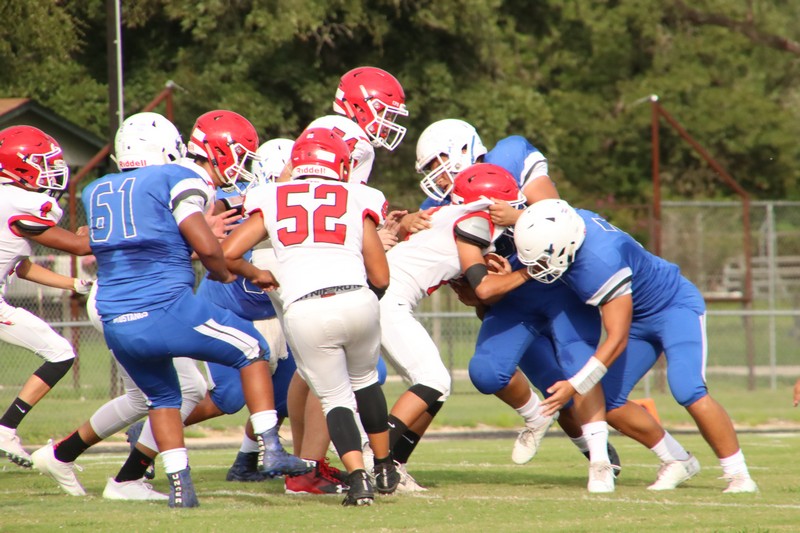 The Natalia Jr. High and Junior Varsity Mustangs were able to claim victories last Thursday versus the Dilley Grey Wolves. The JV Mustangs picked up a home victory over Dilley 30-0, as the combined JH squad picked up a 30-6 road win in Frio County.
JH Mustangs
Due to grades, the NJH Mustangs were forced to combine teams last Thursday in Frio County.
“We started off the game with a muffed kick return that led to a Dilley touchdown, but that is all they would get,” the NJH coaching staff said.
Natalia reeled off 30 straight points thanks to touchdowns by Luis Buentello (2) along with one by Kevin Ray Gutierrez and Paul Zapata en route to the 30-6 win.
“The nervousness of one team got the best of us at the beginning especially with our 7th graders as they played some bigger 8th graders,” NJH coaching staff said. “We had determination and great team chemistry that came together, overcame the nervousness and dominated Dilley.”
The NJH Mustangs will welcome the Poth Pirates to town this coming Thursday at Mustang Stadium.
JV Mustangs
The Natalia JV Mustangs continued to impress, as they overwhelmed Dilley in every aspect of the game. The thing that is impressive about this squad is how many players contribute weekly to the overall success.
Offensively, Natalia scored 30 points thanks to the following scores: Adrian Vasquez 1 TD-Rushing, Nate Banda 1 TD-rushing, Jacob Navarro 1 TD-Rushing, 1-Fumble Recovery for a TD and a Ryan Rizo 1 TD-Rushing.
“We are 2-0 in district and undefeated this season with only one tie,” JV Coach Jeff Terry said.
This coming Thursday, Natalia will welcome the Poth Pirates to town as the game has moved sites to Natalia due to a light poll falling in Poth.
“The schedule says at Poth, but it will be in Natalia,” Terry said. “Come out and support our boys. This will be a big challenge this week and we have been anticipating this match-up all year.”
The JV game is set to begin somewhere around 6:30 p.m. versus the Pirates.
By Eric Smith