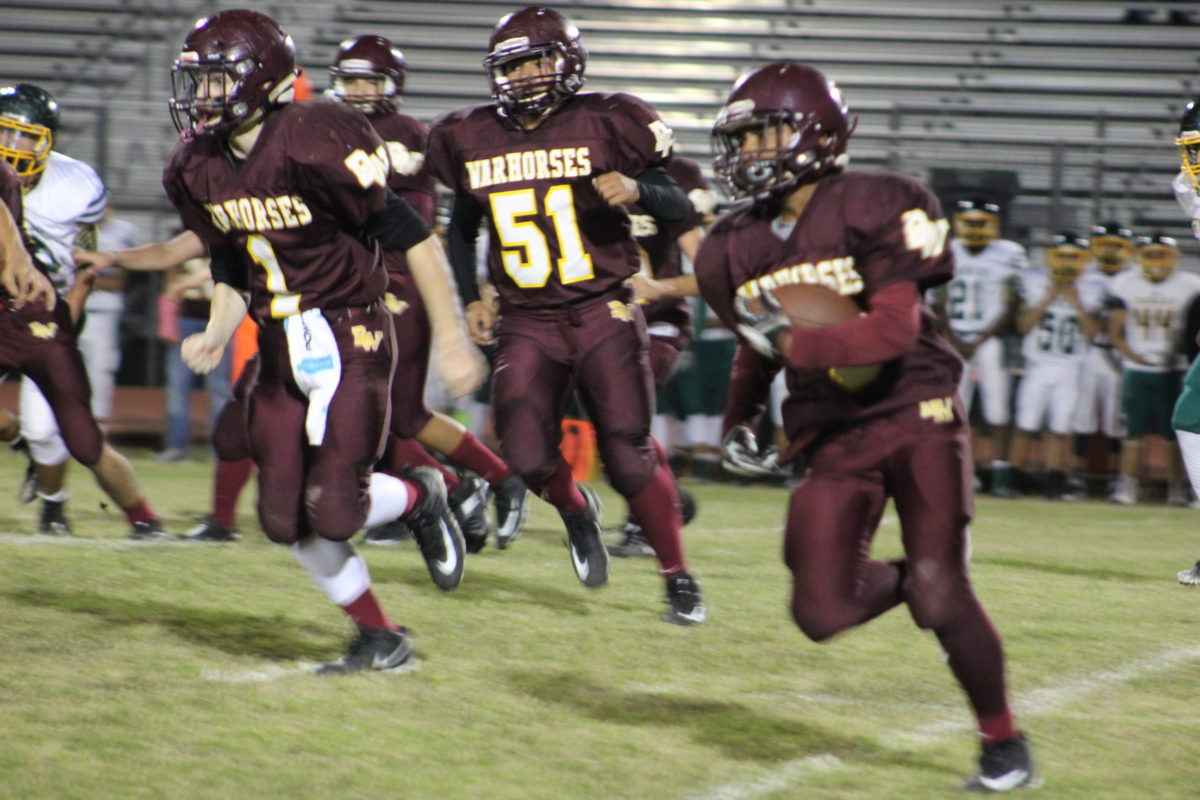 The JV Warhorses finished their season at home last Thursday against a veteran and talented Crystal City team. Devine lost 22 to 24.
In Coach Scott Taylor’s words, “The defense played really well. We executed stunts and made them convert several fourth downs throughout the game. Guadalupe Rodriguez and Cesar Rodriguez played very well at linebacker. Tristan Kannard played well at defensive end and Darren Lafferty made plays on the defensive front.
The difference in the game was that we failed to stop any of their two point conversions and they held us on one of ours. With all the changes due to injuries, move ups and combining of two teams, I am very proud of the way we competed. It would have been easy to roll over and play dead and fall back on all the excuses, but we chose to fight through the adversity and finished the year 6-3-1.”
Completing the season on the JV roster were: Hunter Reyes, Mason Burford-Zawahreh, Joseph Guajardo, Donavon Camacho, Joey Seguin, Armando Gutierrez, Blaine Miller, Hayden Shook, Christian Gerlach, Hunter Maxwell, Colin Dishman, Jeremy Castillas, Michael Reichel, Devin Ornelas, Michael Polanco, Ryan Applewhite, Eliseo Perez, Andrew Perez, Joseph Fernandez, Enrique Martinez, Justin Rozier, DJ Dzierzanowski, Xsavior Martinez, Isaiah Romero, Jesus Hernandez, Evan Priest, Kaylob Nira, Cesar Rodriguez, Isaiah Rejino, Colt Seay, Kyle Hidalgo, Cameron Schreck, Darren Lafferty, Logan Brown, Hunter Nowicki, Aaron Rivera, Garrett Carver, Geoffery Seal, Guadalupe Rodriguez, Robert Ramirez, Chris Wilcox, Zachary Bocanegra, Tristan Kannard, and Joe Mares.
My opinion
This group of young men and future Friday night Warhorses is to be commended for fighting through a season and a sport that many have a difficult time accomplishing. Football is one of the few things left that is physically and mentally tough on kids.
To be able to endure a season that began months ago in the hottest part of the summer, to closing out the season with nearly a completely new set of teammates is admirable. Congratulations JV Horses on representing Devine, your school, your coaches, your family, and most importantly, yourself with dignity and respect. Best of luck in the future!
By Jerel Beaty
Staff Writer