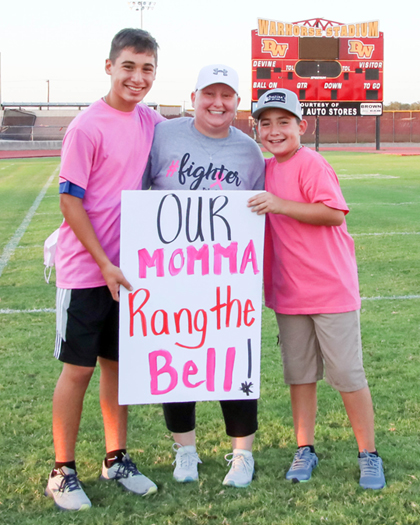 The community, friends, and family gathered together at Warhorse Stadium to present local woman, Nichole Ortiz, with a special honor after her triumph over breast cancer. She thought she was just going to the track to exercise, but she soon saw her two boys, Quay and Zachary, holding the sign “Our momma rang the bell.”
“It was April 20, 2021 when it was confirmed that I had stage 2 Invasive Ductal Carcinoma triple negative. I had self examined, called the doc and was getting tests and scans done the same week. Chemo started right away, the day after I got my mediport,” Mrs. Ortiz said.
“I had 4 treatments of the most aggressive medicine, which they call the “red devil”. It is red/orange in color and this med is so strong they had to space it out and had to be administered by the nurse over a 20-minute span. It wasn’t allowed to be through the IV drop. Those treatments were 4-5 hours every two weeks.”
After many months, she heard the words she had been waiting to hear.
“After more tests and scans the cancer wasn’t showing up anywhere. It was gone!” Mrs. Ortiz said. “The next medicine was Taxol and I did that for 12 weeks. Those treatments were about 2-3 hours this time. I just recently finished those on October 7th, along with being able to ring the bell. It was a good day, being my dad’s birthday was the same day!”

Now she just awaits her surgery on November 9th.
“I will say this was one hard pill to swallow, but every day I got up and I lived my life as I normally would. I was very fortunate to not have been sick like most patients. I continued to do what I was told, worked through all my treatments and I’m still going strong.”
This past week, family and friends and community members showed her their love and support, for the inspiration she is.
“My friend had convinced me to go walk the track, and there they were all holding signs! I love the support from a small town. It’s amazing how they all come together when others are going through something like this.”
For anyone facing a cancer diagnosis, she had one most important piece of advice.
“The one thing that will get anyone through this is a good attitude,” Ortiz said. “You have to stay positive and push through even on your worst days. A BIG THANK YOU to all the support I have from those near and far! I truly appreciate it.”
By Kayleen Holder
Editor