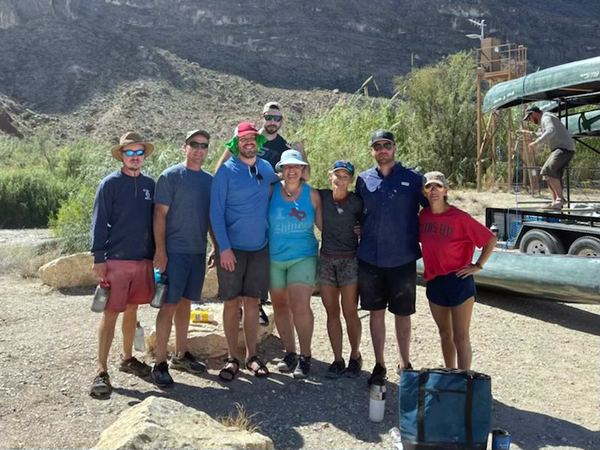 Local woman Teri Hudson, of Devine, and her sister Pam went for a hike in Big Bend this past Thursday, October 7th. Little did they know, their 2-hour hike would turn into a long and treacherous adventure. The sisters became lost for 2 days and spent the night in the middle of the sprawling mountains and desert of Big Bend, spanning over 800,000 acres. By the Grace of God, they found the Rio Grande River below and a group of kayakers and geologists heard their screams for help.
“Friday we went and did some zip lining and asked our guide for a small hike in the area to take up some time, because we had planned our big hike for the next day,” Mrs. Hudson said. “He gave us what looked like a hand-drawn map and some verbal directions. One of those directions was that if we turned left at the wrong spot, we’d be put 12 miles out of our way.”
Planning on a 2 to 3 hour hike, the pair traveled light with each taking a fanny pack holding a bottle of water, a stick of chap stick, a package of trail mix, and an electrolyte mix.
“That afternoon, around 3, we got to the top of the mountain. We were already 4 miles in,” Hudson said. “I think we were already lost and we didn’t know it.”
After 3 more hours of hiking, the sisters were sure they had become lost.
“Now we are thinking ‘that’s not good but it’s not a huge deal’,” Hudson said. “We started picking up the pace, following these big Cairn trail markers, so that we could get off the trail before dark.”
Though the two kept a level head as they hurried down the trail, trying to beat nightfall, they were soon met with a more immediate obstacle.
“We had started running. Pam was ahead of me, and she turned around to sprint back to me,” Hudson said. “There was this big bull (a bison I believe) with a bunch of younger steers in the path, and the big one had started snorting and pawing at us. We ran uphill trying to get away and we panicked because we thought he would chase us. We became totally lost from that 2nd path.”
Starting to get dark, the pair decided it was best to get to the highest ground possible, but their trek to the safety of higher ground proved to be just as challenging.
“We had drank all of our water, and I was extremely dehydrated. We had gone 14 miles at 3,000 elevation, running the hills,” Hudson said. “I could barely walk. Anytime I stood up, I would fall over. Pam is a machine. She would let me rest, but she made sure we kept moving. I started to crawl. We’d go for a while, rest two minutes, and then she’d start us again. My sister got me up that mountain.”
Eventually, the two reached the top. Safe from the wildlife in the brush below, now the sisters dealt with weather dropping in the 50’s.
“I was dressed for hiking and couldn’t stop shivering, so Pam gave me a shirt,” Hudson said. “After that, we just laid there in what light the moon and stars gave us and waited for the sun to rise. We couldn’t sleep.”
As the two sat atop the mountain, Pam spotted a pink glow coming from the other side of another mountain right across the valley. Figuring the light must have been coming from Lajitas Resort or a city, the two made plans to set out that way at daybreak.
“The next morning, we slid down our mountain,” Hudson said. “It was treacherous. It was made of shale that would break away and we had to look out for the caves that could have animals in them. It was scary but God was with us.”
The sisters finally reached the second summit, but instead of a town or resort as they had hoped, they were met with miles of brush in every direction.
“Pam spotted a river passing through, so we knew we had to get there,” Hudson said. “We went through thick brush and mesquite until God put us out onto the rock beach with beautiful rolling waters. We filtered the water through a sock, but the water was already crystal clear.”
The two attempted to again find their trail but ended up back at the river.
“We knew we couldn’t find a way out,” Terri said “There were no signs of humanity. No more cairns or trails….We didn’t even see any trash. No camper was gonna just find us.”
The sisters walked for miles before finding any sign of people; a water bottle and a beer can. The two began to yell as they went, in the hopes of nearby campers. Their screams were answered when a group of kayakers paddled up to them.
“The whole time up to this point, we hadn’t cried,” Hudson said. “We tried to stay tough and just keep moving, but when we saw them, we broke down.”

The kayakers gave them all the water and food that they could, but were unable to take the sisters anywhere in their one-seater canoes. Luckily, another tour group was behind them and would be able to help and the kayakers stayed with them in the meantime.
“When the other group came, a bunch of geologists, they said to come with them down the river, which would take two more days,” Hudson said. When we set up camp later that day, they gave us everything we needed like tents and antiseptics for the two gashes on my legs. I had also gotten 15 cactus needles in my hand.”
Having a satellite phone, the tour guides called their boss at Far Flung Adventure, who would then call the hotel and report them missing, but that report was never made. They also offered to contact Mrs. Hudson’s family. Her husband Jay Hudson had spent the last two days trying to contact Hudson and checking with the resort, who knew nothing about the sisters’ whereabouts.
“When I picked up on this weird satellite number, it made all these weird clicking noises,” Mr. Hudson said. “Then one of the guides left me a voicemail saying ‘Your wife and her sister got turned around on the trail, but we’ve got them, and we’re gonna camp out for the night and then head back tomorrow. We’re with Far Flung Adventures.’ Then he asked Teri her name, and I could hear her voice in the background, which is the only way I knew she was okay.”
The next day, Mrs. Hudson and the group continued down the Rio Grande River while Mr. Hudson tried to track them down.
“I called the hotel about this Far Flung place, but no one had any answers there,” Mr. Hudson said. “So then I called some guys at the Brooster Sheriff Department and tried to get some more info.”
Saturday morning, while the geologists were out on their tour, Mrs. Hudson convinced one of the guides to let her use the satellite phone again.
“I had no clue what Jay or Pam’s husband knew or were doing,” Mrs. Hudson said. “I didn’t want to scare them, so I tried to get in contact and when I got the phone I just started talking, saying whatever I could.”
Jay received this second call and heard “Someone wants to talk to you,” followed by Mrs. Hudson quickly saying “We’ve been out for two days.” The signal was lost after this.
Continuing his search, he eventually was told by a sheriff deputy that the kayak trip was three days and that the hotel was never contacted.
“So I started reading reviews,” Mr. Hudson said. “How long it was, where it started and where it put out. I even found a chart online about the tours put-out spots based on season, weather, water rate and all kinds of information, so I start calculating where she’d be.”
On the last day, the group had ten miles left on the river.
“I was told that once we landed, the resort would be an hour and a half away, and the group would give me a ride in this van that was coming to get them,” Mrs. Hudson said. “When we got to the place, I had to take my contacts out, because they had gotten too grainy too see with. With my bad vision, I just saw this big white jeep and someone standing beside it. Then I realized it was Jay walking towards me. I didn’t know if it was real at first, until I saw my daughter Kate and our dog come out of the jeep.”
Mr. Hudson had calculated a spot 100 yards away from where Mrs. Hudson ended up landing, with the little information he could find. After their long-awaited reunion, they drove back to the resort where the sheriff’s department had closed off their hotel room until they returned.
“Everyone was just so kind and generous to me. I’m just so grateful to everyone and God for helping me,” Mrs. Hudson said. “And Jay, it felt like he saved my life when I saw him.”
Along with the kindness and generosity the kayakers showed her, Terri was awestruck by the sights while they were lost. The sisters had been through the valleys and mountains of the park and watched wild Aoudads scale the sides of mountains.
“The geologist taught me so much about all the rock formations we saw,” Hudson said. “The canals and the mountains we passed through on the river….One night we spent the night in this kind of topless cave. It was amazing, but scary. So remote, it was untouched by humans.”
“What started as a two hour hike turned into a four day ordeal,” Mrs. Hudson wrote, shortly after the rescue. “This group of brilliant geologists and their canoe tour guides literally save mine and my sister’s life. Thank God for people in this crazy world that still deeply care and want to give the shirts off their backs for those in need. God placed these people in our paths and forever in our lives.”
By Noah Davila and Kayleen Holder