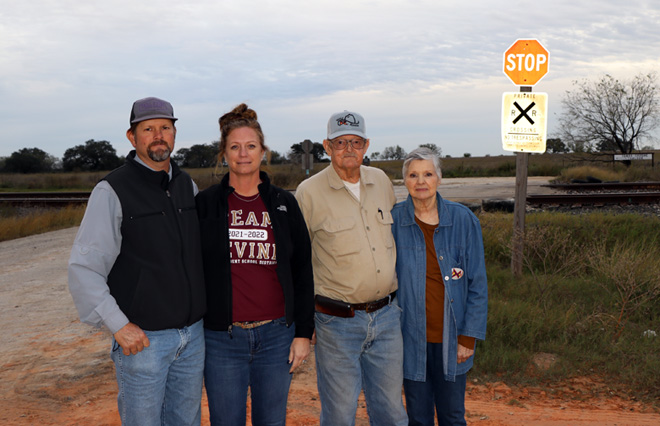 Two local families who have lived on the family ranch in Moore for over 20 years fear they’ll wake up and find themselves land-locked, and without an address. On Friday, Mr. Christopher Toalson was told by a UP Railroad foreman that the RR crossing at 16444 North IH 35 in Moore will be shut down by Tuesday (press day), leaving Toalson and his wife Jennifer, and his parents Billie and Charles Toalson, without surety of another way to access their homes.
“What happens when there is an emergency? We no longer have a 911 address, said Jennifer Toalson. “What happens to all the packages we have ordered or when we need to renew our driver’s license? We no longer have a physical address. What happens on Tuesday afternoon when I get off of work and want to go home?”
“This crossing is our ONLY access to our homes and property. Union Pacific has struck once again. It appears that they are trying to force us to trespass on our neighbor’s property in order for us to access our homes. My in-laws are 84 years old and are too affected by these events,” Mrs. Toalson adds. “We no longer have legal access to our homes. With all this said, Union Pacific has not approached us with ANY legal paperwork as of today. The strong arm bully tactic they are using against my in-laws is abuse of the elderly. Help and Prayers needed.”

The Toalsons explained that UP is building a “side track” for trains to stop, and that is why the last crossing must be closed, they are told. The first phase of the project was started in 1998, and while promises by UP were made to build a new fenced road providing them legal access to their homes, those promises were not kept, according to the Toalsons. They discovered that years later.
“Union Pacific did not follow through by properly filing the legal documents we signed,” Toalson said.
They fear the same thing could happen this go-round, if legal documents are not properly filed and signed, granting them a legal way to access their family land.
To make matters more pressing, Toalson is a 16 -year insulin dependent diabetic.
“I have had a few episodes in the past where my blood sugar dropped into the 30’s and I had a seizure. EMS was dispatched and was able to get to my house to help me. My parents, who are in their 80’s also live on this property,” Toalson said.
UP is building a road on the neighboring Miller property, though the Toalsons have yet to be given any legal access. They also noted concern that they don’t believe EMS nor fire trucks would even be able to drive down that sandy new road anyway, leaving the families in a possibly life threatening situation.
“Even my SUV would not be able to be driven there without getting stuck. And definitely an ambulance would not be able to be driven there either,” Toalson said.
UP press office was contacted Monday, but we have not received a reply.
By Kayleen Holder and KK Calame