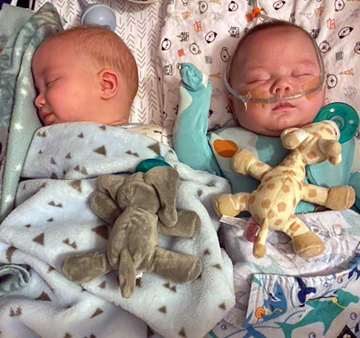 Two precious things we often take for granted…our health and being together as a family.
The darling Thomas twins made their appearance into this world on July 21, 2021, delivered in an emergency birth at 29 weeks due to concern over twin transfusion.
Little Rhyder Hayes Thomas weighing only 1lb 9oz, and his brother Rhett Mitchell Thomas weighing 3 lbs 10 oz, were soon rushed to the NICU, where the brothers have overcome great obstacles.
Rhett graduated from the NICU after 51 days, but it was only recently that parents Kelsie and Matt Thomas, of Lytle, were able to bring baby brother Rhyder home, after 132 long and uncertain days in the ICU.
Mama Kelsie Thomas describes that day as “the happiest she’s ever been.”
“You can see how much they needed each other. It’s the best feeling in the entire world,” Thomas said. “They couldn’t be next to each other in NICU, so they haven’t really been together at all since birth.”

Little Rhyder has made leaps and bounds, now weighing at 11 lbs, and he is keeping mommy and daddy very busy!
The journey all began when the obstetrician noticed signs of Twin Transfusion Syndrome, a rare prenatal condition where twins share unequal amounts of the placenta’s blood supply.
“We saw a specialist twice a week and once they saw reversal in the brain we were told to go to Houston for a laser procedure at 24 weeks. This did not fix things but did protect Rhett and keep Rhyder stable,” Mrs.Thomas said. “He made it until the 29 weeks and the reversal returned. That’s when we delivered.” Because of the forced premature birth, “Rhyder lost so much from the inside–which the placenta couldn’t provide. He is developing day by day. We brought him home on oxygen and he has a g-tube for feeding because of bad reflux.”
“My husband Matt and I are playing nurse/doctor now. It’s stressful, but being home has been his best medicine.”
Proud parents are Matt and Kelsie Thomas, Grandparents are Brett and Cheryl Lorraine, Mike and Celina Thomas, and Randy and Debbie Hutto.
The Thomas family extends “a huge thanks for all the prayers and support from the community, family, and friends.”
By Kayleen Holder
Editor