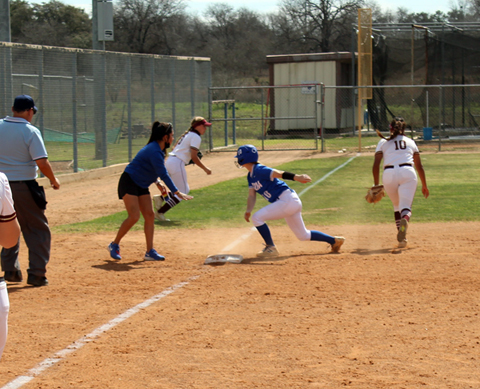 The Natalia Lady Mustangs were able to win a defensive battle last week in non-district play against a much improved Hondo Owl softball team. All offensive execution came in the 6th inning, as Natalia was able to use two clutch doubles to push past Hondo in their 3-1 victory.
Natalia Junior pitcher Abigayle Woodson kept the Owls off-pace the entire night as she held the girls in navy blue to a single hit which also came in the 6th inning. Woodson struck out 15 batters allowing just one run, which was not earned.
The Owls did strike first, as they used an error on Natalia, a stolen base and a double by Megan Buerger to take a short-lived 1-0 lead.
In the bottom of the 6th, Taty Alvarado got on to lead things off with a walk. Natalia then used a walk by Trista Vera followed by huge doubles by Mena Figueroa and Kody Blanquiz to score 3-runs across the plate for the home squad leading them to victory.
Natalia finished the game with five hits offensively and only one defensive error in their win.
At bat-Blanquiz 1-2-1RBI, T. Vera 2-2-1run scored, Gabriella Munoz 0-3-1RBI, Figueroa 1-1-1RBI-1run scored, Kaelyn Lara 0-3, Trina Vera 0-2, Woodson 0-2, Val Carrion 1-2, Alvarado 0-1-1run scored.
Defensive leaders: Put-Outs: T. Vera 15, Munoz 4, Alvarado 1, Figueroa 1. Assists- Alvarado 2, Munoz 1, Blanquiz 1.
By Eric Smith
Staff Writer