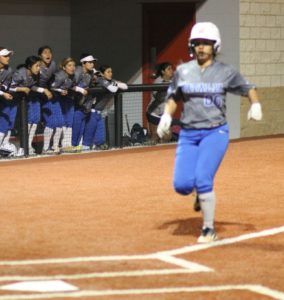 The Natalia Lady Mustang Softball team had their backs against the wall last week versus a scrappy Hondo squad that has flown under the radar for most of the season. The Owls were able to attack Natalia’s freshman pitcher Abi Woodson better than anyone had this season, forcing additional errors on the Natalia defense.
As a result, Hondo jumped on Natalia 3-0 in the opening inning of play. Never say die has always been a motto for the girls in blue on the softball field, as they rallied late to upend the Owls 8-7.
The Owls produced their big 1st inning, thanks to three singles and a double to take the early lead vs the Lady Stangs.
Hondo came close to taking a 4-0 lead in the top of the 3rd inning. Their #3 batter, Emily Fernandez was able to belt a home-run over the fence for the Owls. The problem didn’t arise when she did a cartwheel between 3rd and home plate, but when team-mates touched her in celebration prior to her touching the plate.
Although the umpire didn’t initially rule her out, once Coach Tamara Bednorz reminded blue about the rule, she was signaled out. Woodson got out of the inning after this out with two straight Ks.
This sparked Natalia a bit, as they were able to score their first run in the bottom of the 3rd. Natalia used a Gabi Santoya triple and a Gabby Contreras single to get on the board.
After accounting for three straight defensive outs in the top of the 4th, Natalia went back to work picking up their second run. This came courtesy of a Mena Figueroa single and a nice triple by Bryanna Perez.
Hondo added two runs in the top of the 5th, as they used a couple of errors and two singles to their advantage to take a 5-2 lead versus Natalia.
The girls in blue came alive in the bottom of the 5th. Natalia rallied with two outs to score three runs. Abi Woodson started the rally with a nice single, before scoring on a double by Trista Vera. After watching Bivi Figueroa get on courtesy of a walk, Mena Figueroa blasted a three run home-run to push Natalia ahead 6-5.
Hondo stranded one runner in the top of the 6th, prior to Natalia adding two final runs. These came thanks to singles by Contreras and Munoz, a fielder’s choice by Taty Alvarado and a single by Vera allowing Natalia to take an 8-5 lead into the final inning of play.
Hondo didn’t roll over, as they scored two final runs thanks to a single, a walk and a double. Natalia got out of the game thanks to a Woodson K and a Woodson to Contreras ground-out to seal the deal with a tight 8-7 victory.
This game served as a reminder, that teams will always bring their “A” game anytime they are facing a team that is state ranked like the girls in blue.
According to the stats provided, Woodson pitched 7.0 allowing seven hits, walked one, struck out eight and allowed seven runs.
At bat: Vera 2-4-2RBIs-1run scored, Alvarado 0-3, Munoz 2-3-1run scored, Contreras 2-3-1RBI-1run scored, M. Figueroa 2-4-1HR-3RBIs-2runs scored, Perez 1-2-1RBI, Woodson 1-4-1RBI-1run scored, Santoya 1-3-1run scored and B. Figueroa 0-2-1run scored.
Defensive Put-Outs: B. Figueroa 8, Contreras 3, Woodson 3, Vera 1, Alvarado 1, M. Figueroa 1, KK Lara 1, Perez 1, Santoya 1. Assists: Contreras 2, Woodson 1, B. Figueroa 1.
By Eric Smith