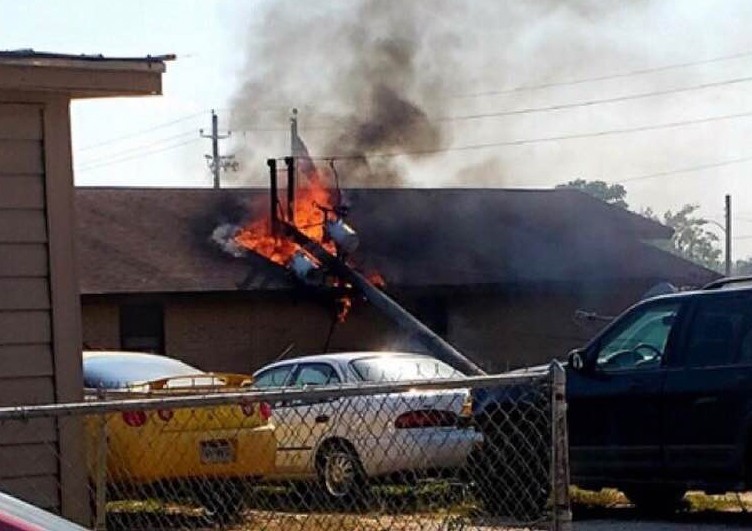 The Natalia Post Office is a total loss after it was engulfed with fire on Friday evening August 3, 2018. Apparently an AEP electric pole with 3 transformers fell onto the roof of the post office building and caught the roof on fire. Postmaster Laura Mann was inside working at the time.
“Postmaster Mann heard the loud bang or crash of the pole, looked out the window and exited the building and learned of the fire as neighboring employees of the tire shop had discovered it as well”, said Gilbert Rodriguez, Natalia Police Chief and NVFD Assistant Fire Chief. “Fortunately it had not crashed through the roof yet so she was able to escape, ” said Rodriguez.
The whole city of Natalia lost electricity as the fire fighters fought the blaze trying to stay clear of the live wires. That wasn’t the only challenge they had met up front. When the pole crashed and took out the power to the town it also took out the power to the fire house and the electronic bay doors to their building as Assistant Fire Chief Rodriguez explained how it all unfolded. “Shortly after 5:00 P.M. we received numerous calls that a pole had landed on the post office which inadvertently caught the building on fire. The whole city of Natalia lost temporary power due to the pole falling on the building. The fire department was dispatched, but due to the power outage we couldn’t open the bay doors. So two of us responded with our quick attack truck while the other two firemen worked on opening the doors manually. Devine was called for mutual aid support. These doors can be opened manually by pulling a cord but it is off the ground. They had to on top of a truck to get to the cords and then pull the cords to opens the doors. They are 14 foot doors . About 6 to 8 minutes later they arrived with the other truck about a minute after Devine had arrived. Meanwhile we were fighting the fire with our quick attack truck and making progress but the fire would reignite all of the sudden. ” 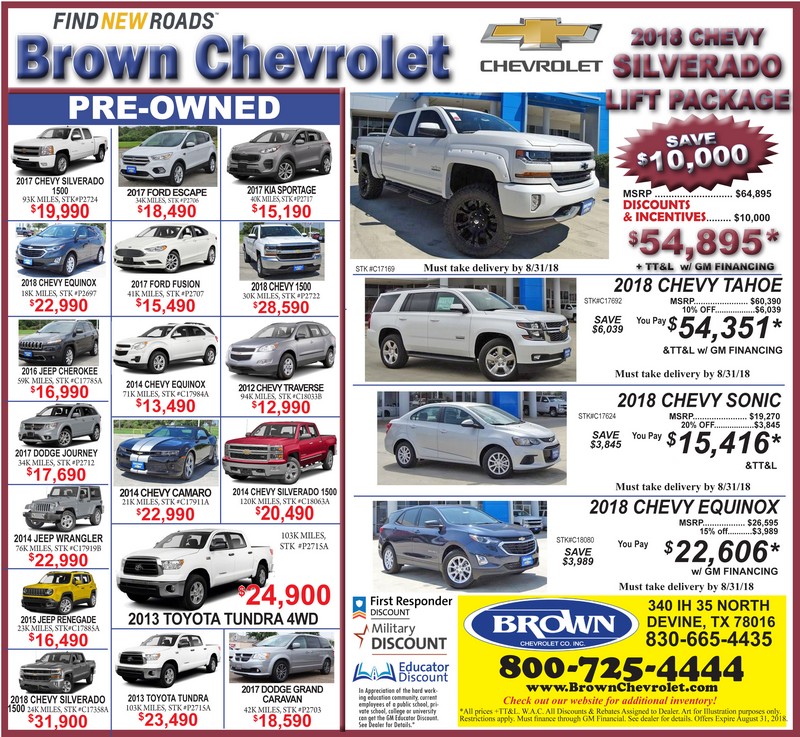 “Next, we all worked the fire together from the inside of the building , Natalia and Devine, but it just kept reigniting. There was some kind of liquid in the transformers which I understand is oil based and kept fueling the fire. As we fought to get control of the fire by dousing the flames with CAFS each time we began making headway it would reignite again and again. We use CAFS which is a mix of detergent and air and water, but mostly air. We had about five firemen inside the building with interior lines making success but it just kept reigniting over and over. So we called in Lytle for assistance, exited the building and switched to defensive mode with an exterior attack with large monitors and started dousing the fire that way,” said Rodriguez.
Five hours and 60+ volunteers later the first responders cleared the scene. At least six fire departments with about 40 volunteers came to the rescue to help as well as another estimated 20 police and ems personnel. Responding were fire departments from Natalia, Devine, Lytle , LaCoste, Moore, Castroville and Bexar County ESD District #5. Also helping were Natalia Police, DPS, MCSO, and EMS.
AEP was able to make the scene and cut off the power to the building and restore it to the town in about 40 minutes by isolating the building’s power. All of the first responders including the firemen had to be careful of the live wires.
EMS transported one fireman to the hospital after a piece of sheetrock fell on his back while he was inside the building fighting the fire. “He is doing good”, said Rodriguez. “Another firefighter slipped and fell and was treated at the scene by EMS and released.
Devine VFD Fireman Christian Jones was trying to help protect the crew fighting the fire inside the building when, “We were down on our knees fighting the fire from the inside when I looked up and saw the beam sagging, so I stood up to protect the crew inside with me”, Jones said, “The sheetrock and beam hit the back of my SCBA, which is our air pack. It just slid off my back and everyone exited the building,” Jones explained. “I do have severe pain so they are making me take a few days off, but thankfully there were no fractures or anything,” he said.
When asked about the pole and how long it had been leaning he responded, “For some time for sure. If you look on google earth and put in the building address you can see the leaning pole.”
The pole fell on its own according to video surveillance. It was not knocked over as rumored.
“We would like to thank all of those who took time to bring the fire fighters water, cold towels and food. Everyone did an outstanding job and we appreciate it. Sonic even sent hot dogs and hamburgers for the first responders. We really appreciate the support and help”, said Rodriguez.
Natalia Postal box customers will have to pick up their mail at the Lytle, Texas location temporarily. See below for further details on that.
Natalia Post Office operations temporarily relocated to Lytle
Due to extensive damage to the facility from a fire that occurred Friday, August 3, around 5 pm much of the building was destroyed. Operations for the Natalia Post Office, 2200 State Highway 173 N, Natalia, Texas 78059 will be moved temporarily, until further notice, to the nearby Lytle Post Office, 14841 Main Street, Lytle, Texas 78052.
Mail for Natalia Post Office box customers will be available for the time being at the Lytle Post Office retail counter during regular retail business hours – Monday through Friday, 9 am to 4:30 pm, and Saturday from 9 am to 11 am.
Full postal retail services will also be available during business hours at the Lytle Post Office, or from other nearby Post Office locations. Customers can call 1-800-ASK-USPS (1-800-275-8777) to obtain information, including available alternate Post Office retail locations, or check the Postal Service website at www.usps.com. The Postal Services smartphone app makes it even quicker to use the most popular functions on www.usps.com, anytime and anywhere.
USPS apologizes for any inconveniences to its customers and will be working to restore postal operations at the Natalia Post Office as soon as possible.
By K.K. Calame
Publisher 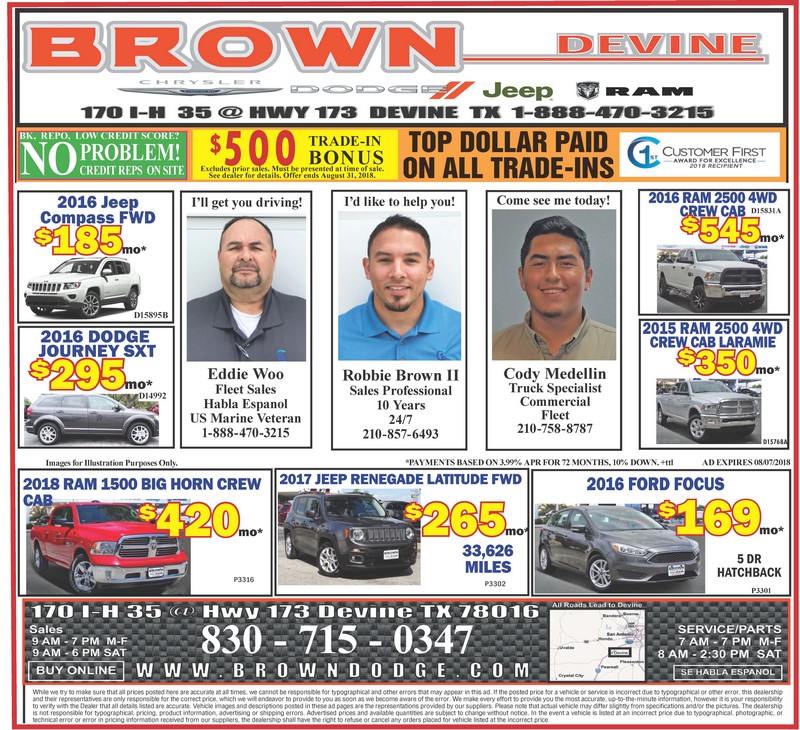