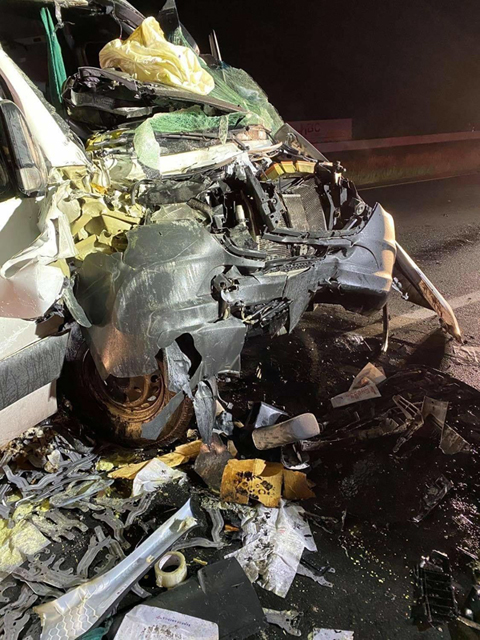 First responders and volunteer firefighters have been extremely busy responding to multiple accidents last week.
On Friday October 30th around 4 pm, this vehicle veered off I-35 Northbound near MM 121, hitting the edge of the new guardrail and flew down the embankment right before a curve. The man and woman inside were both okay thankfully.
“The vehicle went almost 1/8 of a mile down before it came to a stop,” said Deputy Chief Mike Walker.
Crews work to get the vehicle out of the creek bed below the bridge. Volunteers responding to the scene to help for Devine VFD were Deputy Chief Walker, Ethan Yates, Justine Hruzek, Byrom Hruzek, and Paul Gengler. Special thanks to all the first responders and volunteers who take time to respond in our times of crisis.
Van strikes barriers by weigh station hard
That night, on Friday October 30th, a van traveling south on I-35 struck the rubber barricades head on at the weigh station just south of Devine. Authorities had to shut down the highway as crews cleaned up.

“That’s what those barricades are designed for, so vehicles don’t strike the big concrete wall. When you have a vehicle like this going 70 mph…..This van was carrying a really heavy load full of auto parts and they slid up through the vehicle on the passenger side thank goodness, not the driver’s side. So he was very lucky.”
The van started burning up inside the dash area shortly after the collision. DPS and Devine Fire Dept responded to this accident.
The accident happened around 11:30 pm and volunteers and authorities were out on scene for several hours until at least 2 am. Volunteer firemen responding were Chief Robert Scott, Deputy Chief Mike Walker, Daniel Ehlinger, Ethan Yates, Greg Adkinson, and Paul Gengler.
Diesel tank ruptures as collision occurs at same location
Then on the following evening around 9 pm on Saturday, October 31st, first responders were called out to yet another accident on I-35 South around MM 119 at nearly the same exact location.
“This was the very next night, a driver hit the same barricade at the weigh station just south of Devine,” Deputy Chief Walker noted. “Then a second vehicle, a 10-wheeler, collided with the first vehicle.”
That collision resulted in the diesel tank of the second vehicle rupturing and a fire broke out.
DPS and Devine Volunteer Fire Dept responded and were out there for several hours handling the scene. Volunteer firefighters responding to this scene were Chief Robert Scott, Melanie Dossey, Deputy Chief Mike Walker, Ethan Yates, Eugene Salvidor, and Paul Gengler.
Volunteer today
Volunteer Firefighters are welcome and always needed. They do such a great service for our community. You can get info on volunteering at Devine VFD by calling 830-665-4246.