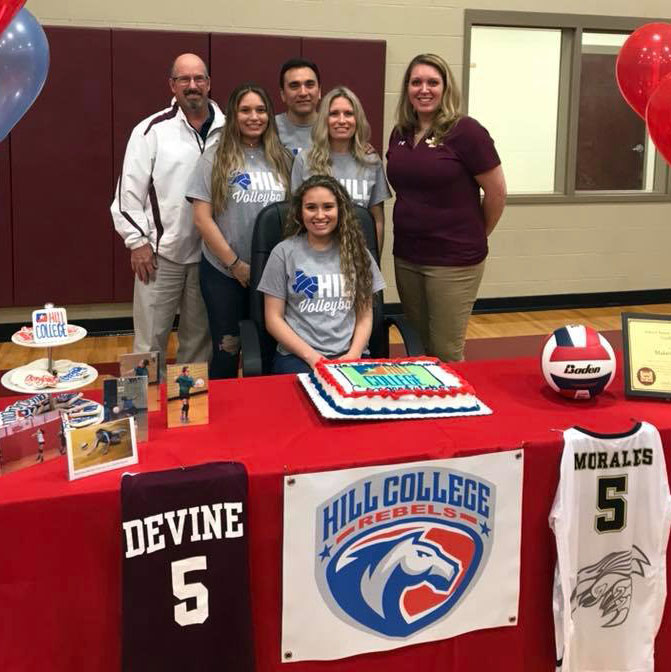 Makenna Morales signed a letter of intent with Hill College in Hillsboro, Texas. She has had an amazing career in high school! She was a 3 year letterman and libero in volleyball her junior and senior year. She received numerous awards during her high school career and ended with over 1500 digs
In 2015 she was named Academic All District, honorable mention all district; in 2016 – 1st Team All District, Academic All District, All Tournament at Pearsall Tournament, TAVC All State Team; and in 2017 – Academic All-District, defensive MVP for District 29-4A, Defensive Player of the Year for TAVC, 2017 TAVC All-Texas Volleyball Preseason Team Classification 1A-4A/Private Schools, All Tournament Arabian Round Up, Game Ball from Express News, TAVC All-Star (game is May 19th in Pearland, TX), All Area Team.
“Makenna is one of the best defensive players to come through Devine. She has a natural ability to read where the ball is going and get there before the ball does. She wasn’t afraid to get on the floor for a ball and never gave up on a play. She has put in countless hours in the gym to get to where she is today. I am excited for Makenna to continue her career at Hill College. I know that she is going to do some amazing things for that program and they are very lucky to have her. She will be missed next year but she has really set a great example for the younger athletes in the program and has been someone for those girls to look up to and admire,” stated Head Volleyball Coach Leigh Ann McIver.