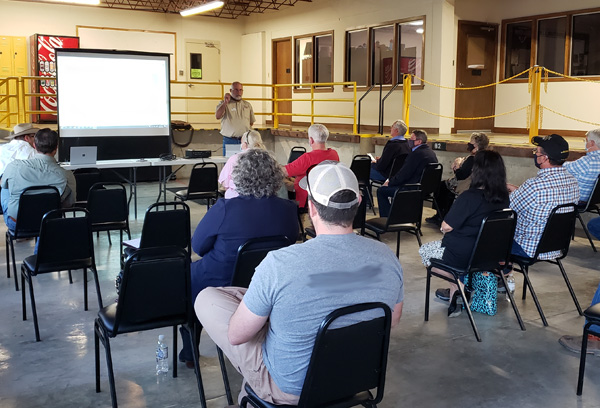 The Medina Electric Cooperative held a scheduled meeting on February 23 to open board nominations and address the public concerns related to the snow event earlier in the month. “We came within seconds of the grid going black,” MEC CEO Rollans stated of the ERCOT interconnection, and went on to say that it isn’t as simple as turning the grid back on. If failure had occurred, a minimum of 5 days would pass before normal power could be restored.
During the meeting, a quorum was met and nominations were accepted for MEC Board candidates. Mary Castellano was nominated, though this is not the only opportunity for members to obtain candidacy: anyone interested in running for a board position should visit MedinaEC.org/Nominee to download the petition paperwork and review requirements. Current board members can be seen at MedinaEC.org/Leadership.

Following the nominations, CEO Mark Rollans gave a prepared message during which he shed much light on the events that transpired prior to and during the snowstorm. In the days ahead of the first snowfall, MEC had taken heed to weather forecasts and began preparations: staging equipment, collaborating with neighboring power providers, and lining up contractors for repairs. They had a plan in place to minimize risk to members and keep the power on through the forecasted storm, aligned with the other 7 member co-ops in STEC (South Texas Energy Cooperative). This plan, however, was completely cast aside when the Electric Reliability Council of Texas, Inc (ERCOT) issued their first orders to immediately cut 5% of the current electrical load.
ERCOT is a non-profit organization which is overseen by the Public Utility Commission of Texas (PUCT) and the Texas state legislature. It was formed to manage the interconnection (power grid) that serves 90% of the state’s electrical load. Our grid is not tied to the East or West US interconnections, a decision which was made by Texan legislators to avoid complying with federal energy regulations. Few of us had heard of ERCOT until the power went out and all fingers seemed to point to the organization, which is run by a 16-person board from various segments of the energy market (5 of the 16 members live out of state and as of Feb 25, all 5 out-of-staters have resigned, including chairwoman Sally Talberg. CEO William Magness has a salary of $814,909). ERCOT’s emergency plan follows a series of steps to assess and respond to shortages of electrical power. Several steps came before the enactment of rolling outages and there were only 2 steps between rolling outages and a hard grid failure.
The contingency plans in place at ERCOT were only ever intended to cope with a statewide power shortfall of 10 Gigawatts (1 Gigawatt/hr is 1000 Kilowatt/hrs) compared to the storm shortage of ~20GW. The peak power was 75GW (this is equal to last summer’s peak power, but most power generation works more effectively in hot weather), and the lowest it got was 45GW. While demand peaked, supply fell due to mechanical and temperature-induced failure at generation stations. All sources of power—Coal, wind, natural gas, solar and even nuclear—were negatively affected by the temperature drop and were not adequately prepared for this level of cold. Though power generation facilities received improved winterization after 2011’s hard freeze, it is not cost-effective to winterize Texan power plants to “Alaskan standards” in preparation for a 120-year weather event. Compounding this was the lack of effective winterization of the state’s natural gas fields; impurities froze in valves and pipes that supply natural gas power plants. ERCOT was able to get the EPA to waive air pollution standards temporarily so that fuel oil could be burned in the natural gas plants and keep making power once supply lines froze.

During the outages, energy customers noticed varying levels of power loss from full power to daily cycles to complete loss. This is due to factors including the high priority of some power circuits within MEC (such as the gas plants which supply natural gas to power plants and Pearsall hospital) and the issue of each house demanding full power the instant power is restored to their circuit. When the heat pump, lights, fridge, freezer, water heater, space heater, TV and washing machine all resume what they were doing, it throws an enormous load on the line and can trip protective equipment and shut the power back off (in the same way you can overload a circuit in your house and trip a breaker). Even though workers rushed to reconnect lines and bypass faulty equipment, it greatly reduced the time in which power was available for some members.
Rollans stated “ERCOT worked but it was ugly,” and went on to explain that power plants and supply lines cannot be turned on and off like a house standby generator. Once the frequency of our power (60 hz is the US standard) drops during an overdraw, equipment and systems begin failing. The best-case scenario for a complete grid failure is 5 days with no power for anyone, to include hospitals and water supplies, but it would likely take much longer to restore normal power. “It’s hard to believe this but our distribution system did… pretty good… but we have problems of our own.”
“MEC was caught between members—who suffered—and ERCOT who called the shots”
After his prepared statement, Mr. Rollans took questions and comments from the public, who had plenty to say. The overwhelming sentiment was that aside from being literally in the dark, members were in the dark as to when power would come on, and for how long, and how much they needed to prepare. Currently no automated system exists to inform members of looming outages and emergency response, an issue which was not helped by rapid-fire and conflicting messages from ERCOT to MEC/STEC. ERCOT sent mixed signals to MEC, saying that things were improving and then immediately saying load reduction was necessary.
Medina Electric received 20,000 calls per day on their system that normally handles 1,000. They contract with a national call center in Abilene for after-hours customer service and began sending the flood of calls to them so that more would get answered. That center soon was overtaken by the weather as well and diverted calls to the center’s other locations in Tennessee and Minnesota.
What’s the bottom line for my bill?
Though not all the data is in and it is too soon to give a definitive answer, Rollans made it clear that Medina Electric Co-op members will not be slapped with ridiculous bills as customers of some market-dependent suppliers have been. This is largely due to the supply management techniques employed by MEC; a large portion of our power is made within STEC and much of the remainder is contracted so prices are agreed-to ahead of time. Many people are finding out that the usually-low costs of the open energy market are volatile, and during the storm, electrical costs shot from the usual $.09/kWh or so to the ERCOT-established market cap of $9/kWh—an increase of 10,000%! Our reduced exposure to the free market should mitigate the majority of price increases; Rollans described MEC’s higher regular energy prices as a hedge against events like this. Though rates should not drastically change, most members used more electricity during to the cold and will see that reflected on their meter and bill.
Anyone who is displeased with the performance of ERCOT can contact their state representative and the PUCT, and those affected by food spoilage or other cold-related damage are encouraged to contact their insurance to see if any relief is available. Because Medina County was declared to be in a state of emergency, FEMA funds are available to help relieve costs associated with the winter storms, including flooding and burst pipes, funeral arrangements and vehicle care (does not cover fuel or food losses). It is important to document everything with pictures and receipts as able, and file a claim with your insurance before filing with FEMA by visiting DisasterAssistance.gov, downloading the FEMA smartphone app or calling (800) 621-3362.
Quick facts: Medina Electric serves 32,955 meters spread over 9,760 miles of power lines. The sources of contracted and STEC-produced power are 64% natural gas, 21% lignite coal and 15% renewables, for a total production and distribution of over 1.3 Billion kWh. MEC members can get rebates for efficiency-boosting upgrades like a water heater blanket, HVAC tune-up, programmable thermostat and Energy Star appliances.
By Kyle G. Saathoff
Staff Writer