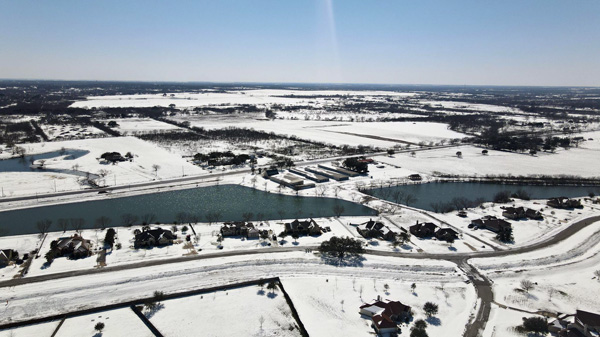 This area received 4-6 inches of snow on Sunday night, February 14, and little did we know, another 2-3” or so would fall that Thursday, February 18. The two snowfalls in one week, totaling 6-9” inches across the area, was a rare event that locals will talk about for years to come. Many will be surprised to learn it’s not the first time our area has seen something like this. A 1925 winter issue of The Devine News shows we also had two snow falls.
Notably, due to days of freezing temps, the first snow cover on Sunday night lasted for days, with some snow still on the ground Thursday when it snowed for the second in one week. A snow man at my own home lived a full 6 days….Never thought I’d see that in Devine!

In the midst of this snowy week in February 2021, I found myself researching through old Devine News files and also found an article written by my great-great-grandfather WL DuBose, about six months after this newspaper began in 1897. It was February 1949, and The Devine News headline read “5 INCHES OF SNOW.” Rumor is Grandpa traded a brand new horse and buggy for the purchase of the newspaper, but he’d have been better off in a sleigh going through town on that day or February 15th this year!
In February 1966, a four inch snow cover and 23 degree low was reported by the Devine News. “Many big snow men were built,” the reporter wrote. That same issue reported it was the heaviest snow this area has seen since January 1949.
An article by Don Lawrence on the big 1985 snow said our area had 10-15 inches, unofficially.
“A record snow in all the south central Texas area left a 10 inch measurement at this writers weather reporting station at 502 W. Coker Avenue in Devine, Texas, although I heard area reports from 10 to 15 inches, but all unofficial.”
January 23, 1925—From 6-8 inches were reported in the Devine area in the following week’s issue of The Devine News. It was reported as “THE BIGGEST SNOW EVER” as of that time frame.
The writer’s thoughts capture the culture in those days, “It has no doubt killed millions of insects. Farmers are rejoicing over prospects, as corn planting will start in thirty days. We have seen colder weather, as the temperature did not fall below thirty during the snow; but the oldest inhabitants cannot recall a six inch snow here; or two snows in one winter. Usually about once every six or eight years the ground is covered with sleet and snow for a day.”
This year’s snow was lots of fun, but widespread power outages put a serious and scary damper on it. Those who had firewood and a fire pit, or a wood stove, or a generator and diesel to keep warm, and a barbeque pit and lighter fluid to cook with, and bottled water or well water to drink were good to go.
But for those who didn’t have plenty of it, those items became harder and harder to find. Most stores were closed for long periods of time due to not having power and or water and those that were open had shelves wiped clean of these popular goods awfully fast.
The City of Devine was hit the hardest locally, with 3-4 days straight with no WATER or POWER. Natalia was also without power for 3-4 days. Lytle fared much better, by securing a generator to keep water flowing, and power outages weren’t for more than 12 hours at a time.
By Kayleen Holder
Editor