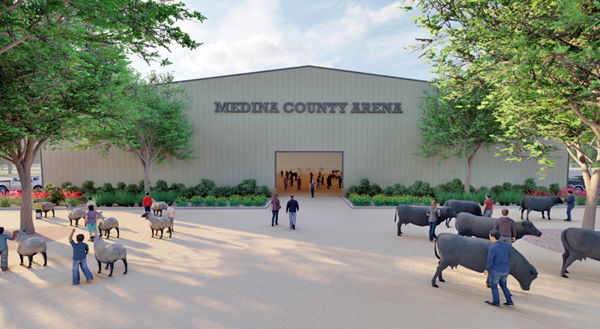 Scott Simpton of the Medina County Junior Livestock Show (MCJLS) presented an initial proposal for a modern county show compound which would be composed of several facilities on one 50 to 100-acre plot of land which could be used for livestock shows, fairs, concerts, graduations, receptions and other large events.
This project has been slowly building support, with 1,600 signatures collected at various businesses and events in the county, and is now going to the voters to decide on the May 1, 2020 ballot. The ballot gives a choice for in favor or against the 1 cent tax increase to fund the $10,000,00 (10 million) to build it and levying of a tax up to 1 cent if needed (see below).
Ballot reads : For or Against- Proposition A- “The issuance of not to exceed $10,000,00 of Medina County Texas General Obligation Bonds for a Multipurpose facility, and the levying of a tax in payment therof.”
Background info:
(From February 10, 2020 The Devine News article by Kyle Saathoff).
Mr. Simpton drew parallels to similar facilities to the Uvalde Fairplex, Kendall County Youth Ag Center and the JB Wells center in Gonzalez, and noted that no equivalent is present in Medina County. Simpton described a facility that had multiple components such as an arena, amphitheater, show barns, temporary or permanent horse stalls and RV hookups—all available for rent, separately or as a whole facility. The location would be central to the county, and would not ‘belong’ to any one community; access to a state highway and utilities are also criteria for choosing where to put it, should the project come to fruition.

An initial estimate of $6 million was used to figure out how this would impact taxpayers, and a few models to absorb this cost were presented, varying from a 1¢ per $100 ($10 per $100,000 valuation) tax increase to a plan with no tax increase. Year-to-year tax valuation growth in the county has averaged 6.5% over the last 10 years, largely due to the encroachment of San Antonio in the Northeast of the County. The first model assumes no growth, with a 1¢ tax increase, which would raise $10 million. That is considered absolute worst case tax scenario. The second model is a structured tax increase and assumes no growth: a .8¢ tax increase for 4 years then a reduction to below .5¢. The third model assumes 5% growth (which is 1.5% less than the 10-year average) and would result in no increase to the tax rate.
Commissioner Larry Sittre (Pct. 2) has been receiving numerous calls from developers for the Northeast part of the county and supports the idea that growth will be able to cover this project without changing rates. Sittre said there are “Developers and Lawyers behind every bush,” and despite the expected growth in the county, “We never set our budget based on houses that might be built, only what we currently have.” He noted that 5 subdividers had called him in a 4-day period in the prior week.
Commissioner Jerry Beck (Pct. 4) expressed concern over the increasing tax levy that has resulted from higher property valuations even without an increase in tax rate, stating “We raised it some time ago and said we’d lower it and we haven’t lowered it yet.” He has been outspoken against increasing tax bills for several years, as the Commissioners Court can change the tax rate but cannot control that property values have been assessed higher and higher each year.
All four commissioners were in agreement that if the project moves forward, it will only be after the voters have approved it via a ballot vote. MCJLS was encouraged to build support through community outreach.

Editor’s Note: This article was updated on 4/8/21 to correct the Election Day date and possibility of a 1 cent tax.