Three commissioners (all but Larry Sittre of Pct. 2) and Judge Schuchart were present for the March 11 Commissioners Court meeting, as well as 6 guests connected with the developer of the Woodlands, 4 county employees and 4 other guests. Those developers were there for the primary item of the day, The Woodlands, which is a large housing development being approved in Northeast Medina County. Through the private sale of bonds, $18.5 million in private funding is being secured for the grand-scale housing project.
These bonds will be paid out over 30 years and are not backed or funded by the county. Included in The Woodlands’ plan is parkland which will be deeded to the county, private roads and other infrastructure which will meet county standards and will be up kept privately (other developments in the area operate in the same manner).
Commissioner Beck (pct. 4) described the impact on taxpayers. 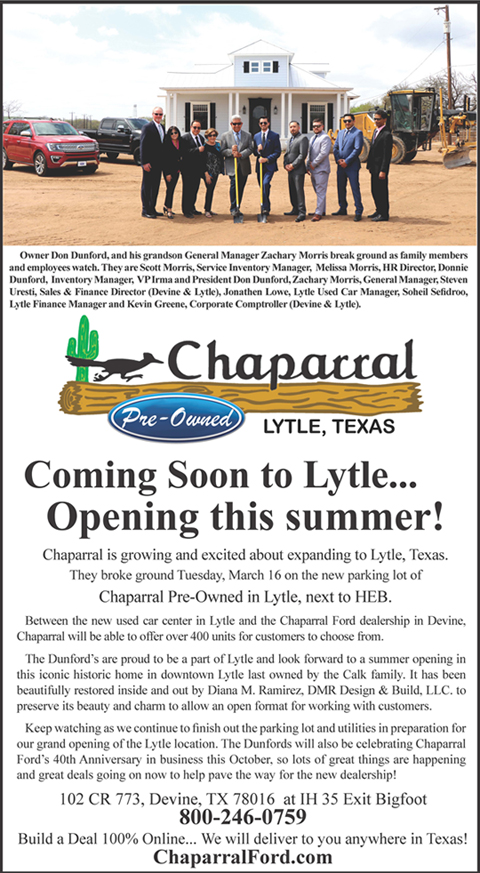 “Everything benefits the county as far as the improvements, and serves to enlarge the tax base,” Beck said. He clarified that there will be no increased tax levy to fund The Woodlands. “I’m hoping with this new development and the resulting larger tax base that we can reduce the tax rate. I have asked for it [reduced county property tax rates] many times.” The tax rate can be changed by a majority vote of the four county commissioners—Timothy Neuman (pct. 1), Larry Sittre (pct. 2), David Lynch (pct 3.) and Jerry Beck (pct. 4).
March 2021 was declared American Red Cross Month in Medina Co. in recognition of the altruistic work done by the organization through the pandemic, hurricanes, wildfires, tornadoes and ice storms. The Hill Country Chapter of the Red Cross was chartered in 1917 and provides CPR, first aid and lifeguard training, supports military families, install smoke alarms and coordinate blood donations and find donors. Red Cross member Sarah Weeks explained that they receive no federal funding and instead rely on donations to fund operations. She further described the transition to online training and made clear that the need for volunteers is as strong as ever! Interested persons can call 1-800-RED-CROSS (1 (800) 733-2767) or visit redcross.org.
House Bill 749/Senate Bill 234 resurfaced again this month with broad opposition to the piece of legislation from county government. If you have not heard, it is a bill that serves to “silence county government,” as Judge Schuchart put it. The bill bars county government from working with and hiring professional lobbyists to represent the interests of local government. The bill makes no limitations to PACs (Political Action Committees), industry (such as the deep-pocketed aggregate and oil industries which have a lot of sway at the state level) or to state agencies, who would still be able to spend as much as they like on lobbyists. Empower Texas is the group pushing the bill, selling it as a way to prevent taxpayer money from being wasted in politics. That raises the question as to how much Medina Co. money goes to professional lobbyists: just $1,900/year.
Following a 3-month test with HTS Voice and Data Systems, a one-year contract was approved for storage management as well as various connectivity services. HTS has been providing these services satisfactorily and earned this contract to handle data cloud storage, digital security, VoIP (Voice over Internet Protocol), and general IT. Contracting this out provides a broader spectrum of expertise than is practicable with in-house IT and data storage (the county is eliminating the need to run their existing 28 servers), at a cost of $9,695/month.
Nominees to the Medina County Historical Commission were approved, numbering 29 people, headed by CHC Chair—Philip King and Marker Chair—Bradford Boheme.

Change orders for the Courthouse Annex were approved, totaling $12,644. These included a sign, flooring changes and additional outdoor lighting/wiring.
In response to a national shortage of 6,000 courtroom reporters, and a rapidly-increasing gap between supply and demand, Judge Schuchart spoke in support of a permissive House Bill (HB228) which was filed by Rep. Andrew Murr. It will allow any court in Texas to use a court recorder in lieu of a reporter, without requiring special authorization. This bill will not hasten the removal or retirement of currently-employed reporter in Medina County but will prevent cases from being delayed due to a lack of staffing and will allow courts in smaller counties to install equipment instead of retaining a skilled and professional reporter. Federal courts and the majority of states have allowed digital recordings to replace a live reporter, and Medina Co. has the equipment already in place and has been using it for 25 years to provide accurate records. These systems cost $5k-20k to put in and have an annual upkeep of $0-2500; “our CCL court recording system has not been late to work and maybe malfunctioned one time due to human error,” said Schuchart, who encourages citizens to write their representatives and ask them to support this bill.
Bids for Depository, Hondo Sub-Depository and Devine Sub-Depository bank contracts were accepted and awarded to Castroville State Bank, Vantage Bank Texas and Security State Bank, respectively.
Bids for a 66-inch steel roller drum were received valuing between $72k and $92k; the lowest bid was accepted from ASCO in the amount of $71,965.42.
A committee was formed to solicit bids for vending machine services in several county buildings, with an expressed interest in consolidating all vending to a single provider.
Preliminary approval was given to vacate and replat lots 48 & 49, Red Wing Estates Subdivision off of CR371 in pct. 1, combining the 2 lots into 1.
Final approval was given to reduce the speed limit on CR 5223 to 40 MPH between FM 2200 & CR 512 in pct. 3.
By Kyle G. Saathoff
Staff Writer