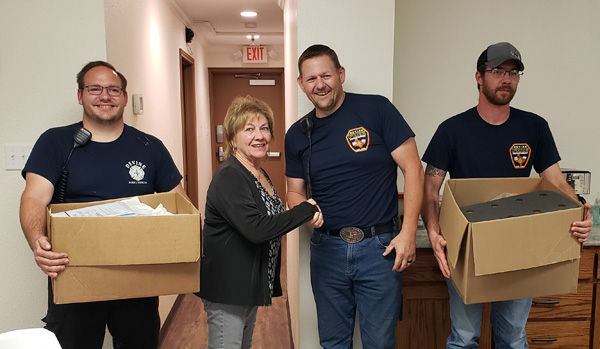 The board for Medina County Emergency Services District #4 met on March 9th for their monthly meeting, with 4 guests attending from Natalia FD (Bryan Graham, President) & Devine FD (Greg Atkinson, Chief; Richard Hitchcock, Asst. Chief & First Responder Org. Administrator; & Daniel Ehlinger, Fireman). The visiting firemen from both departments were pleased to be there and accept donations from ESD4 which were approved last months and go to benefit each FD; NFD received a check to buy new cutter-spreaders and DFD received supplies to create 3 new medical ‘jump bags’ which will stand ready to go out the door on calls. Tony Martin, VP of ESD4, commented “It used to be a fight for funding between emergency services, but things are better now. We don’t spend so much time selling barbecue plates trying to fundraise.”
The state of the EMS building following the ice storm was also addressed: no real damage was sustained and none of the blood or other medical supplies were lost, thanks to a generous citizen loaning a generator to the station. This prompted the conversation that most other local agencies and businesses are having: “When can we get a standby generator put in?” Several ideas were put forward, including an automated natural gas installation, used military surplus and also where to install it for safe operation; it was decided to continue the conversation at the April 13 meeting.

The health fair was discussed as well, and ideas were kicked around for co-locating the event with Mission Devine, which a guest stated was coming back for 2021. An old idea that was well-received by the community was reflective house number stickers to make it easier for EMS to get to scenes quicker. These stickers have not been put out in some years and many can still be seen in the areas surrounding Devine, which is a testament to their durability. The board approved another round of 200 signs/stickers and they are being ordered for a total cost of ~$1900. Hearing this, DFD Asst. Chief Richard Hitchcock volunteered some of his crew to help EMS install the signs if they needed it when the time comes. “We’re all working together for the common cause, and that’s the community,” Tony Martin noted. The idea here is that consistent and highly-visible installation would be most effective if the first responders put the signs up themselves where they will be easily seen.
The proposed Devine helipad upgrades were discussed again this month, with more ideas coming together for potential partnerships and common access to the facility upon completion. There’s no intention to fix it half-way; the board is making plans to create a landing site that will enhance safety and access for medical helicopters for years to come.
February saw 226 total calls for EMS, with an average time of 7.96 minutes overall, 7.05 in Devine and 9.6 outside of Devine. In consideration of the road conditions and mass confusion of the ice storm, the stats were also calculated with the worst 5 times omitted, which changed the averages to 6.91, 6.21 and 8.19, respectively. Mutual aid was called from Atascosa 3 times and Castroville 1 time. The representative from Allegiance (the EMS service provider for ESD4) reaffirmed that the second full-time ambulance for Devine/Natalia has proven to be a successful change and fewer calls have to be outsourced.
By Kyle G. Saathoff
Staff Writer