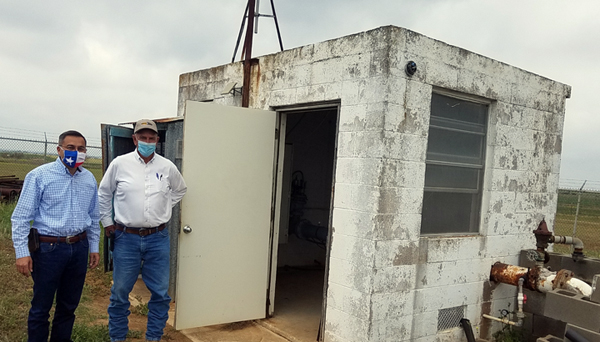 This August, James McGrath will celebrate 16 years of dedication to the City of Lytle and its citizens. Director of Public Works, McGrath has spent every day of those 16 years doing whatever was necessary to ensure the peace of mind for citizens dealing with anything from potholes to busted pipes.

“He is a great city asset,” Lytle Mayor Ruben Gonzalez said. “He’s not afraid to get right into anything. He takes pride in knowing how everything works. If he is on the job, people don’t have to worry.”
Besides handling all the water, sewer and street maintenance, he even takes on the responsibility of assisting with every single one of Lytle’s events, public or private.
“We set up for all the town’s events like the hayride or the Easter events,” McGrath said. “Whenever somebody rents out the community center we go down there and set it all up. Whatever we gotta do to make sure everyone has an easy time.”
Before his work for the city, McGrath had started plumbing at a very young age, eventually serving as a member of the 62nd Engineer Battalion in Fort Hood, Texas.
“I was drafted in 1971 by the Army, and served until 1972. It helped me get my plumbers license for when I got out,” McGrath said. “I had already started before the Army though. My grandfather was a plumber all his life, like me. I guess it’s in my DNA.”
After serving, Mr. McGrath would go on to work as a plumber for 31 years.
“He was more than prepared for this job,” Mayor Gonzalez said. “He already knew how all the water connections were laid out and what everyone was putting into them before he came to the city department.”
While Mr. McGrath spends most of his time making sure the city is in running order for now, he is also very invested in Lytle’s future.
“He’s also tied into economic development.” Mayor Gonzalez said. “Whenever a business comes in, he’s there to get them started in the right direction.”
Though McGrath’s job is largely a thankless job, he takes great pride in keeping the city running and the occasional gratitude he receives for it.
“Sometimes we get a thank you. People get upset by little things, and everyone complains when we start working on their street, but then we finish and all they can say is thank you.”
By Noah Davila
Staff Writer