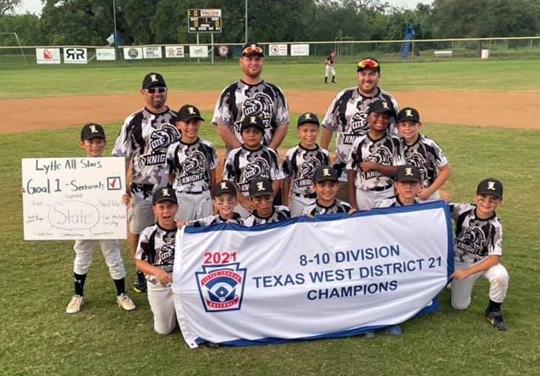 On June 22, Lytle’s Black Knights All-Stars took home the District 21 Championship, beating Jourdanton for the title 14-6. This is the first district championship in Lytle Little League’s history.
“It took the kids a minute to really realize what they had just accomplished,” Head coach CJ Roberts said. “They’re our first district champions in the almost 25 years our league has been running, and they were amazed.
The championship game was held in Pleasanton that evening, and that night the team was welcomed home by their own Spirit Line.
“The kids thought it was so cool to see the police and fire department, the mayor, and the community all there to welcome us back home,” Roberts said. “It was cool for me too because I grew up in Lytle and seeing how these kids performed really gave me a sense of that small torn pride.”

Congratulations to team members Kason Martinez, Jase Garza, Davaun Reed, Zane Davenport, Noah Pierce, Caleb Roberts, Andrew Frausto, James Thompson, Clayton Jopling, Elliot Mata, Christian Cortinas, Gus Mata, CJ Roberts, Manager, Coach James Thompson, and Coach Freddie Martinez on their hard work and success
“We were having 3-4 hour practices leading up to the game,” Roberts said. “We’ve got a good group of kids who understand what kind of effort it takes to be successful, and they made that effort.”