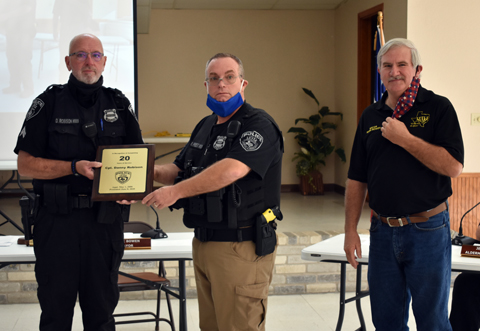 Congratulations to Officer Robison of the Lytle Police Department for his 20 years of service to the city. Also pictured are Chief Richey Priest and Mayor Mark Bowen

The City of Lytle cancelled its annual 4th of July Celebration they usually host due to the lack of fireworks and concerns of large crowds and control due to social distancing requirements since the City of Lytle is still under an Emergency Declaration due to the corona virus pandemic nationwide. The park will be closed for only one day Saturday, July 4.
The park will be open on Friday, July 3 but will be closed at dusk (between 8:30 – 9:00 p.m.). It will be closed all day and night Saturday, July 4, and reopened early Sunday morning, July 5th.
The city park is normally open 7 days a week, 24 hours a day. It is open regularly now, except on holidays when specified during the pandemic.
Mayor Mark Bowen informed the council that “Our fireworks vendor couldn’t get to market due to the pandemic, so we don’t even have fireworks anyways. It’s been a challenging time for everyone, and with the social distancing, how could we do it?”
Mayor Bowen asked Police Chief Richey Priest and each councilman to give their opinion.
“It’s the biggest event we have. We used counters and counted at least 1,200 people inside the park”, said Chief Richey Priest. “And I figured we missed another 500-800 outside the park. And more further out. We had at least 1,500 two years ago. It’s a huge event yearly. The bathrooms are back open and we have new signage. Maybe for big events you might close it, but we will do whatever you want and is needed. It’s up to council, we are here to serve”.
Council members Ruben Gonzalez, Sam Cortez, and Laura Reyna felt like it might be okay to leave it open.