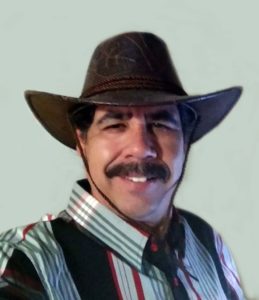 Leonardo Z. Jimenez, of San Antonio, passed away on August 14, 2018 in Gainesville, Georgia at the age of 55 years. He was born May 24, 1963 in San Antonio, one of six children of Benito Gomez Jimenez and Olga Zepeda Jimenez. In 1981, Leonardo graduated from John Jay High School in San Antonio.
After graduating from high school, Leonardo worked as a supervisor in marble and granite countertop production for many years. He loved music and was a talented musician. He would often play his accordion and drums, entertaining his large family and many friends.
Leonardo was preceded in death by his father, Benito G. Jimenez and his brother, Pedro Z. Jimenez.
Survivors include his mother, Olga Z. Jimenez of San Antonio; daughter, Naomi Jimenez of Gainesville, Georgia; brother, Benito D. Jimenez, Jr. of San Antonio; sisters, Yvonne Jimenez, Delia Marie (Jesse) Coronado, and Melissa Jimenez Moreno, all of San Antonio; five grandchildren; 12 nieces and four nephews; as well as numerous other relatives.
The Tondre-Guinn Funeral Home will open for gathering at 9:00 am on Friday, August 31, 2018, followed by a Memorial Service to Celebrate Leonardo’s Life at 10:00 am. Interment will follow at St. Louis Catholic Cemetery in Castroville.
Arrangements by Tondre-Guinn Funeral Home.