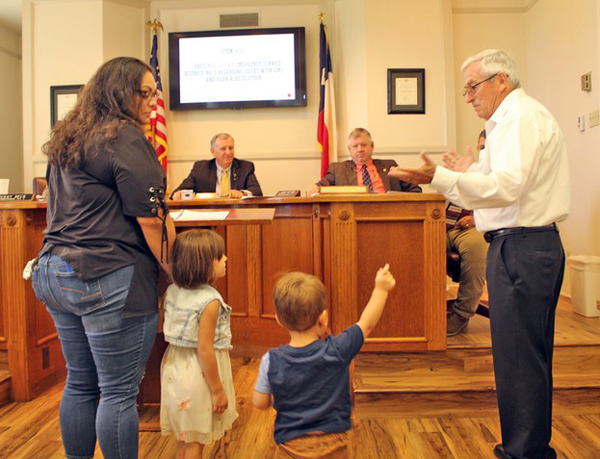 Emergency service board member Pat Bourcier addressed Medina County Commissioner’s Court this past Thursday, September 12 regarding issues with EMS in the Devine/Natalia areas. Little Leah, and her mother Misty Ramirez were also present to express their concerns, as Leah waited over 34 minutes for an ambulance to arrive and then ended up needing airlife. The little girl was airlifted over an hour after her family called 9-1-1. Thankfully she did not have life-threatening injuries, but county leaders and the ambulance provider are coming together to fix break-downs in communication.
This incident was just an example of how several issues have resulted in communication barriers between our local ambulance drivers (Allegiance EMS) and Medina County’s 9-1-1 service.
Leaders from all sides of the equation (including representatives of the volunteer ESD boards who hire our ambulance service and 9-1-1 district members, Pat Bourcier, Polly Edlund, and Bobby Rhode, Medina County Sheriff’s Dept rep Tony Aguilar, Medina County Emergency Manager Keith Lutz, and the hired EMS provider, Allegiance EMS Chief Operating Officer Dan Gillespe and his staff) met all together for the first time and came up with several solutions.
They also worked through many misunderstandings this Thursday.
“The root of the problem is communication,” said Medina County Emergency Manager Keith Lutz, and by the end of the meeting all parties had a better understanding of issues on both sides of the table.
“When we cannot get your units (ambulance drivers) to respond to our dispatch, we are lost. The units are not consistently telling us where they are,” Lutz said. “What they need to do is make sure they get a response from our dispatcher. When they say Medina County 8110 is rolling, they need to wait for an acknowledgement from our dispatcher, to make sure they heard them, because we have a lot of calls coming in.”

Allegiance EMS Chief Operating Officer Dan Gillespe assured county leaders that this will be addressed immediately.
There was some concern that some Allegiance drivers may be calling in their position to the Allegiance company dispatch center, instead of calling into the Medina County dispatcher first.
Allegiance staff member Joe Cerda added, “We have told our crews that if you are only going to pick up one radio—make it the Medina County radio.”
On the other hand, it was pointed out that some ambulances don’t have the digital mobile radios they need to ensure communication goes through (This happens when a unit from San Antonio backfills or when one of our dedicated Medina County units or the Moore unit is in the mechanic shop).
“There is nowhere in this county you can’t use a mobile radio, but if all you have is a handheld you’re in trouble,” Lutz said.
Here are some of the solutions they came up with which we can expect to see implemented soon:
#1- ESD boards and Allegiance must make sure there is a digital P25 mobile radio (100 watts) installed in every Medina County ambulance.
Additionally, we must decide what is the best way for Allegiance EMS best crews to communicate with Medina County dispatch when they are in backfill ambulances from San Antonio that don’t have the mobile radio?
It seems that all of the dedicated Medina County ambulances have a mobile radio, but when a backfill from San Antonio is called in, they don’t have mobile radios. EMS drivers cannot always get through to county dispatch without the correct mobile radios which are hardwired into the ambulances. This becomes a problem when our Medina County Allegiance ambulances are busy, or in the mechanic shop, and a backfill ambulance is called from outside the county.

Gillespe stated this Tuesday that “All the Medina county ambulances have always had the mobile radios. The one they were referring to not having one was the non-contracted float ambulance we added in Moore. The Moore primary ambulance is back in service and has a radio now.”
When asked if they could have an extra mobile radio on hand for when ambulances are in the mechanic shop, etc, he stated, ” It’s difficult to have an extra mobile radio on hand because they have to be hard wired in to the truck.”
So this important question remains: What is the best way for backfill ambulances to communicate with Medina County dispatch?
#2- The Medina County 9-1-1 District agreed to email a PDF of the most updated county map to our ESD Board #4 and Allegiance. This 2018 map compiled by our local 9-1-1 district includes the private roads in Medina County, but our local EMS did not have a copy of it. County Commissioner’s Court gave the 9-1-1 district the go-ahead to print an even more updated map as well, and a PDF of that map will also be provided to all ESD boards and EMS providers at that time.
The county requested for Allegiance to see if they can add another layer to their CAD system that would allow EMS crews to see all the private roads that the county has mapped.
Allegiance’s mapping system currently operates on Google Maps.
“Google Maps does not include the private roads on their maps,” Lutz said. “That’s their policy.”
In order for EMS crews to have access to the more detailed map that the county has, Allegiance’s Chief Operating Officer Gillespe offered a fast solution.
“We will get a separate tablet, specifically for mapping, put into all of our trucks,” Gillespe said. “It will be designated just for displaying that map.”
#3- Allegiance will contact STRAC and begin using the STRAC unit tracking system on their local ambulances. This is the system our other ambulance provider uses, and it allows Medina County to view and track the ambulance units as they travel.
“We have a television screen in our dispatch center that tracks where all of our Community EMS units are,” Lutz said. “It would be nice if our dispatchers could see your Allegiance units on that same screen.”
(Community EMS is the provider for the Hondo area.)
“We will get on STRAC if that’s the system you are using,” said Gillespe.
“It’s just a matter of getting the app downloaded on the phones in our units,” a staff member added.
#4- Allegiance will add the E-Dispatch program to the ambulance unit phones, per the county’s request, and Lutz will provide Allegiance with the authorization code to join our county in a week or so.
The county recently began using a program called E-Dispatch to relay detailed information to emergency responders via a written message that goes to their phones. It provides the address and nature of the call and more, and is beneficial because crews can reference the information as many times as they need to.
#5- The fifth issue hasn’t yet been agreed upon. Allegiance has offered an “EMD” service to Medina County, which would allow county dispatchers to immediately push a button that transfers the call to Allegiance dispatch centers located in other cities. The benefit is that the Allegiance dispatchers are medically trained and will remain on the phone with the caller to give medical advice until the ambulance arrives.
“So if it takes your ambulance 30 minutes to arrive, you are saying you’re EMD (medically trained dispatcher) is going to stay on the call that whole time?”
“Yes,” replied an Allegiance staff member.
Allegiance requested that Medina County transfer 100% of the calls to Allegiance dispatch centers, but County representatives have expressed concern over this.