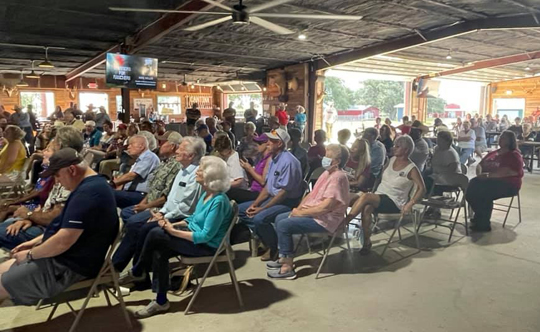 A large border rally was held in Hondo this past week at the South Texas Corn Maize. The event was standing room only with an estimated 175 concerned citizens, and many activists who came to speak here.
Sheriff Randy Brown as among the speakers.
“I’m not a politician, I’m not a social butterfly, and I am not a public speaker, but I am American, and by the Grace of God I was born in Texas,” said Sheriff Randy Brown. “I have lived in Medina County my entire life, going on my 28th year as a sheriff. In all my years here, all the challenges we’ve had, nothing I have ever seen compares to what we are seeing now daily.”

“Here shortly, an East bound train will be pulling up and many will be on that train. If you buy a new car, there’s a good chance illegal aliens have ridden in that car. They break into the train cars, sit in the vehicles inside, and turn on the AC and listen to music all the way here,” Sheriff Brown said.
Undocumented immigrants are coming in through railcars and also in vehicles on major highways and interstates that cross this area, causing many dangerous pursuits.
“We have Hwy. 90 and Interstate 35 and the railroad coming through here,” Sheriff Brown said. “But we are not recognized as a border county, so we don’t have the same resources, the only means that we have to deal with it, is very time-consuming.”
“What funds what we do, is you, the taxpayers. And when we get in a pursuit and there’s a bailout, they just scatter. We are out there hours and hours,” Brown said. “They are going in people’s backyards and houses. They are getting braver. We had a man, who we believe to be an undocumented immigrant come into a man’s house the other day, while he was sleeping. When he woke up, he took off.”
“These people are not the people who used to come and work for your grandfather. That’s not the people we are dealing with in these pursuits,” Brown said.
“Keep your head on a swivel and call the sheriff’s office. We are going to do everything we can to hold the line here. I’m not in charge of what’s going on at the river, and if I was I would close the border….We have the resources to close the border, why don’t we close the border?”
“I appreciate ya’ll coming together. I think we’ve done enough talking though. It’s time for action. I’m more comfortable out there in the trenches with my guys. I always tease that I’d rather be in a gun battle, than up here speaking in front of a crowd. That’s just who I am.”
When asked what nationality the immigrants coming through Medina County are, Brown responded:
“From the intel that we gather, and we try to interview especially the coyotes doing the hauling– I would say out of every 10 groups that 8 or so are going to have somebody coming from these other countries that you are talking about,” Brown said. “And this isn’t about people coming over to better their lives. These people aren’t coming to work and send money home.”
“They are coming to steal, and coming to kill. I cannot tell you the number of sex offenders and murderers that have been identified in those groups,” Brown said. “And the drug dealers love it, because they are shipping their stuff.”
There are many things that have changed and many new tools needed.
“For example, when you pull over a vehicle, there’s stuff you can’t touch, because it will absorb through your skin,” Sheriff Brown said, talking about the drug Fentanyl.
With weekly pursuits and searches through the brush and all areas, drones have become a necessity.
“We are having to change how we do what we do every day. I just bought a $30,000 drone, thanks to the drug dealers. It’s their money that we bought it with. The tools that we have to carry right now are different,” Brown said.

“As of right now Border Patrol is still coming when we call them,” Sheriff Brown said, regarding groups that have been captured.
“I’ve got a jail that’s full. I am housing inmates in four other counties. If we start trying to house all these people here, it ain’t gonna work.”
Border Activist Raul Reyes was also a keynote speaker.
He stated, “We had well over 175 participants. Focus was to inform, educate and activate people on what is happening on our border. There is media (mis/non)information and then there’s realities of what is happening on our border. At this rally we focused on realities and what people can do during this time. Every county is now a border county as the entry of illegal aliens is hitting hard all Texas communities. It’s our effort to make “aware” our citizenry so they can actively call on their reps to do something about this.”
Two officials from Kinney County, Warriors for Ranchers, Rio Grande Conservatives, and many others spoke as well.
Reyes’ team also coordinated events in Del Rio, Carrizo Springs, Medina Valley, Kinney County (Bracketville), and is helping coordinate more in Kerrville and Fredericksburg as well.
Also speaking in Hondo were two officials from Kinney County, Warriors for Ranchers, RioGrande Conservatives, the host of the El Conservador Radio Show, Latinos for America First, and more. Many of the same speakers will be in Atascosa County next week for another rally in Atascosa County on August 8, along with some local officials.