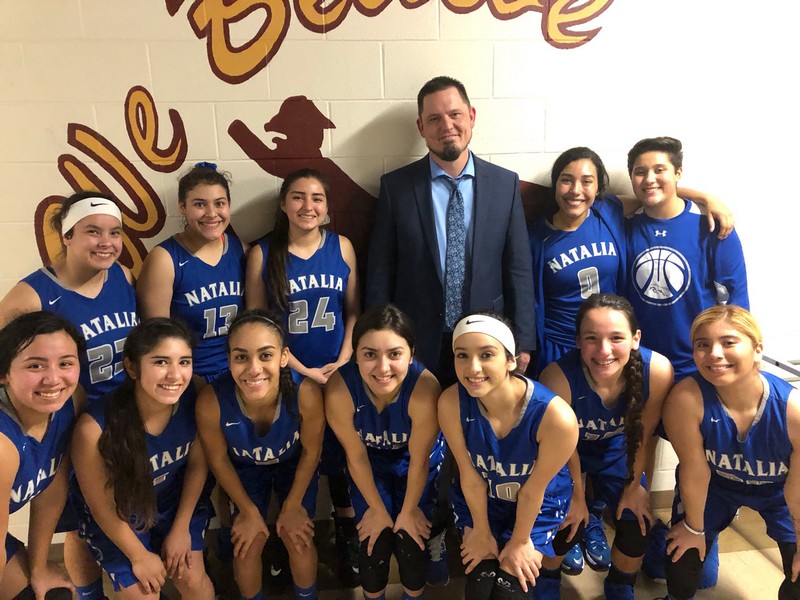 The Natalia Lady Mustangs picked up a key District 30-3A victory last week in LaSalle County allowing them to remain right in the playoff mix.
Aside from the impact this game had on district standings, this victory was historic for Coach Doug Lum who is in his second go around with Natalia Athletics, his first as the leader of the Girls Varsity program. The victory was #200 for Lum, who began his career in Natalia on the boys side of things before stints at McMullen County and Jourdanton.
“Win #200 is about the young people who I have been honored to coach,” Coach Lum said. “I’m thankful for everyone who has ever played on a team of mine. Our greatest joy as a coach comes from watching our players be successful in life. I am more proud of that than anything else.”
Natalia and Cotulla played in a very physical battle in which both squads left it all on the court. There was a combined 62 free throws attempted (34 by Natalia, 28 by Cotulla).
In the opening quarter, Natalia proved to be one point better than the Cowgirls, as four Lady Mustangs combined scoring efforts to give the girls in blue the slight edge. Sam Stallworth led scoring with four of the eleven.
In the second quarter, Jelly Padilla turned things up a notch, as she scored five of eight for Natalia fueling them to a 19-18 lead at the half.
Natalia’s biggest quarter of the game came in the 3rd, as they were very aggressive getting to the line for a total of fourteen free throws. Natalia was able to make just six of those fourteen, but luckily accounted for an additional four buckets fueling them to a 14-7 edge over Cotulla. Leading scoring in the 3rd was Raven Sanchez who scored five in the quarter. This allowed Natalia to build a 33-25 lead going into the 4th.
Cotulla attempted sixteen of 28 free throws in the 4th quarter in what turned into a free throw contest. Natalia attempted a total of fifteen free throws in the quarter. Cotulla edged the girls in blue 10-9 scoring, as neither team shot the ball well from the line.
Luckily, the girls in blue had taken care of business up until this point allowing them to steal a big 42-34 victory in LaSalle County.
“It was a great team win for our kids,” Lum said. “Everyone contributed and I am extremely proud of how this group has fought through adversity and stuck together.”
Scoring Leaders: Sam Stallworth 9, Sanchez 7, KK Lara 5, Padilla 5, Zita Perez 5, Destiny Zapata 5.
Upcoming Games
Natalia was at home on press night against Dilley. This coming Friday, Natalia has a HUGE road game in Lytle as they look for revenge from the girls in black and gold.
Tuesday, Natalia welcomes the district leading Jourdanton Squaws in town for a 6:30 p.m. battle.
By Eric Smith