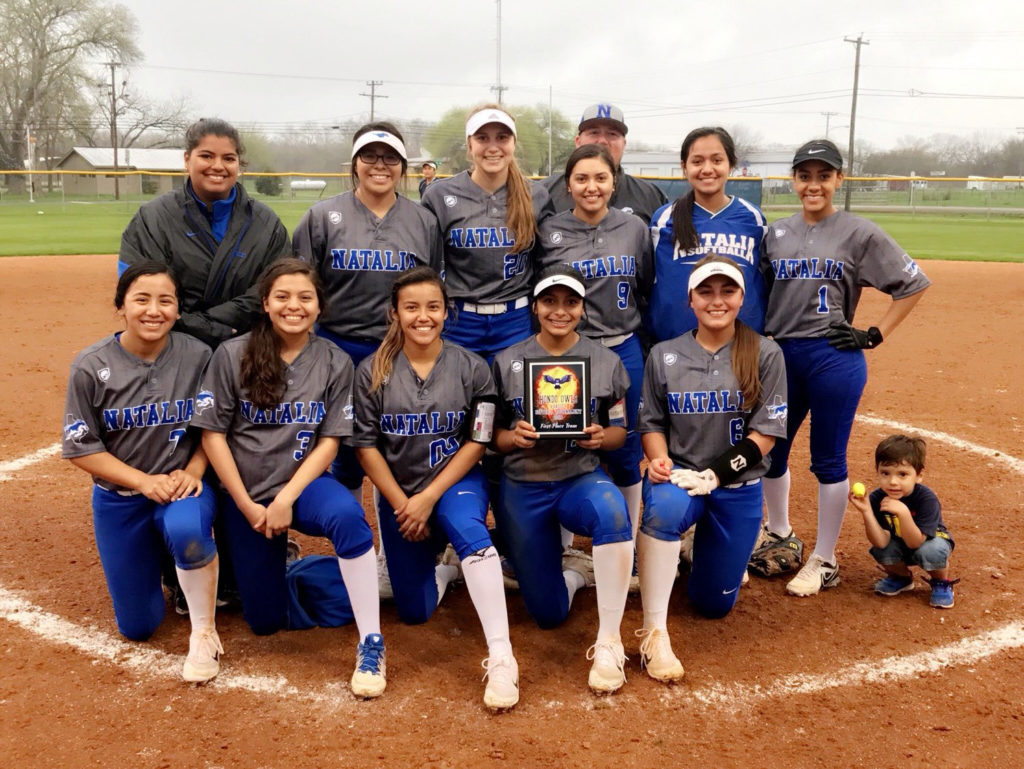 The Natalia Lady Mustangs (14-3-1) dropped two games during their week of action. After suffering a heart-breaking loss to state ranked Pearsall on February 27th, Natalia was able to win three of four games in the Hondo Tournament last weekend.
Despite falling in their second game of the tournament to Pleasanton, the Lady Mustangs were able to defeat Hondo in the finale to finish as the only team with one loss in the round-robin event.
Pearsall
It was an offensive battle before a packed Pearsall Softball stadium last Tuesday. Natalia and Pearsall played in a see-saw battle in which the girls in blue got off to a 2-0 lead through an inning and a half of action. This came courtesy of a JuJu Morales single, a Biviana Figueroa double, a Bryanna Perez single and a fly-out by Gabi Sontoya.
Pearsall responded with one run in the bottom of the 2nd and one in the bottom of the 3rd inning.
Natalia jolted ahead with two runs in the top of the 5th thanks to a home-run by Morales, a double by Figueroa and a single by Trista Vera.
The Lady Mustangs added their final run in the 6th thanks to Gabby Contreras single and a Jimena Figueroa single to give the girls in blue a 5-2 lead.
Unfortunately, hard hits and defensive miscues down the stretch allowed Pearsall to score four shocking runs upending Natalia 6-5.
Perez led the offense with three hits as Morales, B. Figueroa and Felicia Guzman added two each. Garza took the loss on the mound.
Hondo Tournament
Natalia opened the Hondo Tournament with their second win of the season over Sabinal. The Lady Mustangs out-hit Sabinal 14-4 to pick up a 9-2 win.
Garza allowed four hits and two runs (one earned) and accounted for four Ks in the contest.
After trailing 1-0 after one, Natalia scored one run in the 2nd, 3rd and two runs in the 5th, before out-scoring Sabinal 5-1 in the final inning of play.
Perez and B. Figueroa led the offense with three hits each as Garza and Vera added two each.
Natalia’s third loss of the season came at the hands of Pleasanton. Nothing went right for the Lady Mustangs, as base running errors offensive and three defensive errors proved costly.
Despite out-hitting the Lady Eagles 10-7, Natalia came up short 4-1.
Garza pitched 6.0, allowed seven hits, four runs (three earned) and struck out four.
Garza, Vera and J. Figueroa led the offense with two hits each.
Saturday, Natalia returned a bit short-handed as they were missing almost half of their starters due to Regional Powerlifting.
Natalia didn’t miss a beat, as they slammed D’Hanis in their Saturday opener by a score of 11-3. Natalia out-hit the Cowgirls 8-5.
J. Figueroa got the start and allowed five hits and three runs (two earned) during the 3.0 innings on the mound. Garza also pitched 1.0.
B. Figueroa led the offense with three hits.
After watching Pleasanton fall to Sabinal and Hondo, Natalia knew their final game of the tournament was for the tourney title vs. a much improved Hondo squad.
Natalia got off to a slow start, but came back to hammer the home squad Owls in dominating fashion 12-0. Natalia out-hit the Owls 14-1 as Garza was stellar on the mound.
She pitched 5.0, allowed one hit, struck out eight and walked one in the game.
Offensively, Vera, B. Figueroa and J. Figueroa led the way with three hits each.
Upcoming Games
Natalia was on the road on press night battling the Hondo Owls once again.
This coming Friday, the Lady Mustangs will welcome the Bandera Lady Bulldogs to town for a 7:00 p.m. for their final non-district battle.
On Monday, March 12th the Lady Mustangs open district play on the road vs. district rival Jourdanton at 1:00 p.m.
By Eric Smith