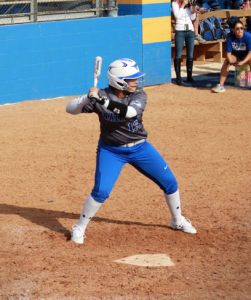 It has been a rollercoaster ride for the youthful Natalia Lady Mustangs (15-5-1) and last week was no different. After suffering a disappointing road loss in Hondo, the girls in blue responded with a home thrashing of the Bandera Lady Bulldogs.
Fast-forward to the District 26-3A opener this past Monday, Natalia did everything they could defensively and offensively to hand Jourdanton the game.
Hondo
Natalia had defeated Hondo in the Hondo Tournament just days prior to this battle on March 6th. The only difference, was the fact Natalia was without a number of starters in their first blow-out victory over the Owls. Tuesday night, Natalia had everyone in attendance.
Hondo took a blow-out loss just days prior personal, as they roared back Tuesday night in front of their home crowd.
Natalia jumped out to a 2-0 start, as they used a Biviana Figueroa double, a Daniella Garza double and a single by Bryanna Perez to give the girls in blue a quick lead.
After watching Hondo strand a runner on base in the bottom of the 1st, Natalia responded with a pair of runs in the top of the 2nd. Natalia used a hit batter (Jimene Figueroa), a walk by Gabby Contreras and a single by Trista Vera to give Natalia a 4-0 edge. This lead stood until the bottom of the 3rd.
Hondo rallied with a four run inning, thanks to two singles, two errors and a double to tie the game.
Natalia surged ahead in the top of the 5th, thanks to singles by Felicia Guzman, J. Figueroa and Contreras.
Hondo responded in the bottom of the 5th, scoring their two final runs thanks to a number of errors and three singles giving them the 6-5 lead that would hold when all was said and done.
Natalia outhit Hondo 12-10, but it was five defensive errors by Natalia that proved costly.
On the Mound– Garza pitched 6.0, allowed ten hits, six runs (one earned), struck out eight and walked one.
At bat– Vera 2-5-1RBI, B. Figueroa 1-3-1run scored, JuJu Morales 0-4, Garza 1-3-1run scored-2RBIs, B. Perez 3-4-1RBI, Guzman 2-4-1run scored, J. Figueroa 1-3-1run scored, Contreras 2-3-1run scored and Gabi Sontoya 0-3-1RBI.
Bandera
Just days later, the Bandera Lady Bulldogs came to town and Natalia looked much more like themselves. Natalia out-hit Bandera 19-5 and only surrendered one defensive error en route to a 14-2 run rule victory.
On the mound– Garza pitched 5.0 allowing five hits, two runs, struck out five and walked one during the game. Guzman pitched 1.0, allowed no hits and struck out three.
At bat– Vera 2-5-1run scored-2RBIs, B. Figueroa 3-4-3runs scored-1RBI, Morales 1-4-1run scored, Garza 2-3-3runs scored-2RBIs, B. Perez 4-4-2runs scored-5RBIs, Guzman 0-4-1RBI, J. Figueroa 1-3-2runs scored, Contreras 3-4-2RBIs, Camryn Arizola 0-0-1run scored, Santoya 2-3-1RBI and Megan Castro9 1-1-1run scored
Jourdanton
Natalia opened 26-3A on Monday afternoon vs. the reigning Co-District Champion Jourdanton Squaws on the road in a rare mid-afternoon battle.
Natalia came to play offensively, as they had a number of opportunities. Defensively on the other hand, they struggled from start to finish surrendering eight defensive errors giving up four unearned runs.
“We simply made too many errors to give us a chance to win this one,” Natalia Head COach Travis Crowley said.
Natalia got off to a hot start offensively, as they scored two runs in their opening at bat thanks to singles by Vera, an error put into play by Morales, a single by Garza and a single by B. Perez.
Jourdanton scored their first run of the game in the bottom of the 2nd, as they used two singles and a fielder’s choice to cut into the lead.
The Squaws tied the game in the bottom of the 4th, thanks to a walk, a crucial error and a single.
Natalia surged back ahead in the top of the 5th. Natalia used a Vera walk, a B. Figueroa walk and a single by Garza to score Vera and give the girls in blue a 3-2 lead.
Natalia added to their lead in the top of the 7th, as they used a Garza single, a SAC bunt by Perez and a clutch single by J. Figueroa to increase the lead to 4-2 for the girls in blue.
Unfortunately, Natalia stranded a total of nine runners on base during this game and it came back to haunt them.
Jourdanton was able to win the game in the bottom of the 7th. They used one single, a hit batter, an error, two uncharacteristic walks and an additional error to fuel the Squaws to a 5-4 victory over Natalia.
Natalia finished the game with a 9-7 edge offensively, but the Squaws had just one defensive error compared to eight by Natalia.
On the mound– Garza pitched 6.1, allowed seven hits, five runs (one earned), struck out three and walked four.
At bat-Vera 2-3-2runs scored, B. Figueroa 0-2, Morales 0-3-1run scored, Garza 3-3-2RBIs, Mariah Joseph 0-0-1run scored, B. Perez 1-3-1RBI, Guzman 0-4, J. Figueroa 2-4-1RBI, Contreras 1-4 and Sontoya 0-3.
Upcoming Games
It doesn’t get any easier for the girls in blue, as they host state ranked Karnes City on Tuesday, March 20th at 7:00 p.m. as 26-3A play continues.
By Eric Smith