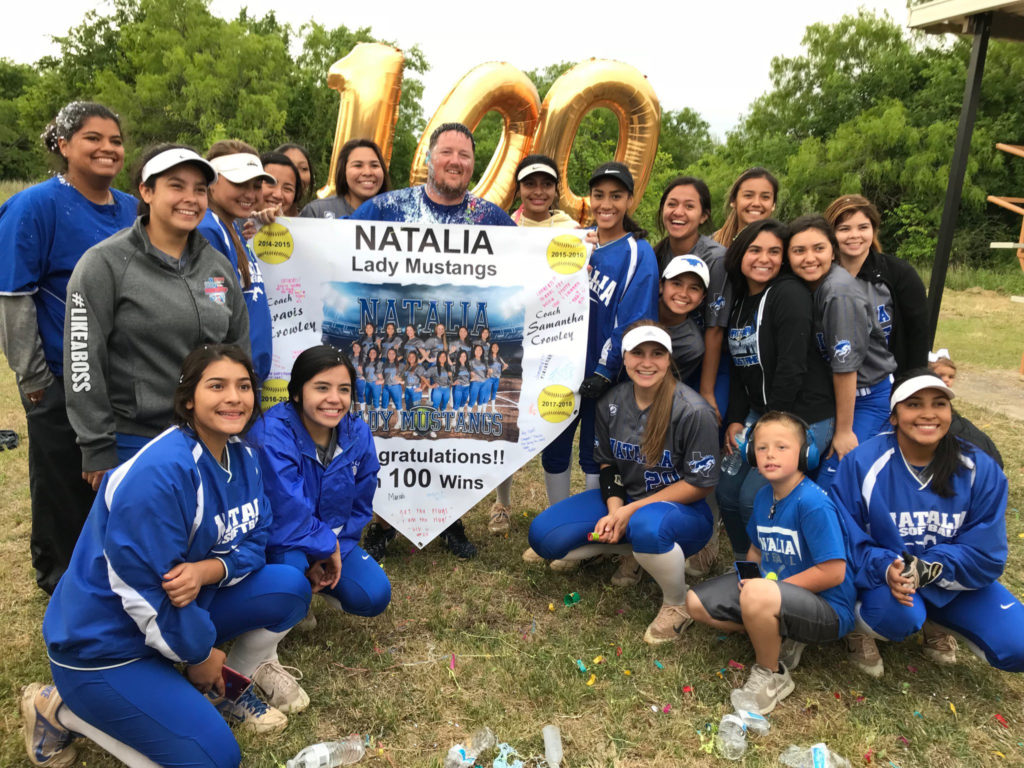 For the seventh year in a row and the 23rd time in the last 25 years, the Natalia Lady Mustangs (23-6-1. 8-2) are playoff bound on the softball diamond. Natalia was able to wrap up in 26-3A play last weekend, with lop-sided victories over Ft. Sam Houston Cole and the Brooks Lady Bengals which helped secure victory #100 for Coach Travis Crowley.
The girls in blue, will battle the Florence Lady Buffs in the Bi-District Playoffs in a best of three playoff series which is set to begin Thursday night at Kyle Lehman at 7:00 p.m.
“It is a great honor to be able to coach a program that has such a rich tradition of success,” Coach Travis Crowley said. “Reaching 100 wins in four years is something special for our girls, especially the seniors that have been through it all. I am grateful for the current and past players and the dedication and commitment to be the best they can be.”
Cole Lady Cougars
Natalia hosted Ft. Sam Houston Robert G. Cole on Tuesday, April 17th for their final home game of the season which also served as Senior Night. Natalia was able to out-hit Cole 12-2 en route to a 13-1 four and a half inning victory.
Natalia used two pitchers on the mound versus Cole. Daniella Garza pitched 2.0, allowed one hit, walked one and struck out three giving up one unearned run. Jimena Figueroa pitched 3.0, allowed one hit, walked one and struck out five giving up one unearned run.
At bat: Garza 1-1, Maria Joseph 0-1-1run scored, Trista Vera 2-3-2RBIs, Sam Sanchez 0-1-1run scored, Felicia Guzman 1-1-1run scored, Gabby Contreras 1-2-1run scored, Jimena Figueroa 0-2-1RBI-1run scored, KK Lara 1-1-1RBI, Angelina Zapata 1-2-1RBI-1run scored, Dezarae Perez 0-2-2runs scored, JuJu Morales 1-2-1RBI-1run scored, Megan Castro 2-3-4RBIs-2runs scored, Gabi Sontoya 1-2, Caprice Sanchez 0-1 and Biviana Figueroa 1-2-1RBI-1run scored. Defensive Put-Out Leaders: Vera 8. Assists: J. Figueroa 2.
Brooks Academy
Natalia left no doubt in their final 26-3A battle of the season, as they battled Brooks Academy on the road. Natalia dominated the Lady Bengals, out-hitting the SA squad 9-3 en route to an 18-1 victory securing #100 for Head Coach Travis Crowley.
Natalia’s Garza picked up the win on the mound, pitching 3.0 innings, allowing three hits, striking out seven and allowing one earned run.
At bat: Garza 2-2-4RBIs-1run scored, Joseph 0-0-1run scored, Vera 1-1-3RBIs-2runs scored, Sanchez 0-1, Guzman 2-3-1RBI-2runs scored, Contreras 0-1, J. Figueroa 1-2-1RUN SCORED, Lara 0-1, Perez 0-0-2runs scored, Morales 0-1-3runs scored, Castro 1-2-1run scored, Sontoya 0-1, Sanchez 0-0-1rbi-1run scored and B. Figueroa 2-2-2RBIS-3runs scored.
Defensive Put-Out leaders: B. Figueroa 7, Contreras 1, Garza 1. Assists: Garza 1.
Bi-District Playoffs
For the first time since the 2014-2015 season and only the second time in school history, the Natalia Lady Mustangs will battle the Florence Lady Buffs in the Bi-District Playoffs. If you re-call, Florence was able to overcome a 0-1 game deficit during the first meeting, to win two in a row at San Marcos High School to upset the Natalia Lady Mustangs during the senior season of Charlene Castro.
This season, the Lady Buffs finished 3rd in 25-3A behind Blanco and Johnson City and graduated the talented pitcher Natalia faced last time last season.
“I am glad the season is over so we can focus on a tough Florence team in the first round of the playoffs,” Crowley said. “We were able to fine tune some things this past week and we are hopeful to hit the playoffs in stride and go on a deep run.”
Not much is known about the Florence squad, except for the fact they did lose a pretty talented senior class a year ago. District 25-3A like 26-3A, is pretty talented from top to bottom, so this will not be a cake walk by any means.
Game one of the best of three begins Thursday night at 7:00 p.m. at Kyle Lehman High School. Game two will be Saturday at p.m. with a third game to follow if needed.
“We need all of the support we can get,” Crowley said Monday night on his twitter page. “We are looking forward to a sea of blue cheering on these girls. Be loud, be encouraging, and full of excitement as we take on a tough Florence squad.”
By Eric Smith