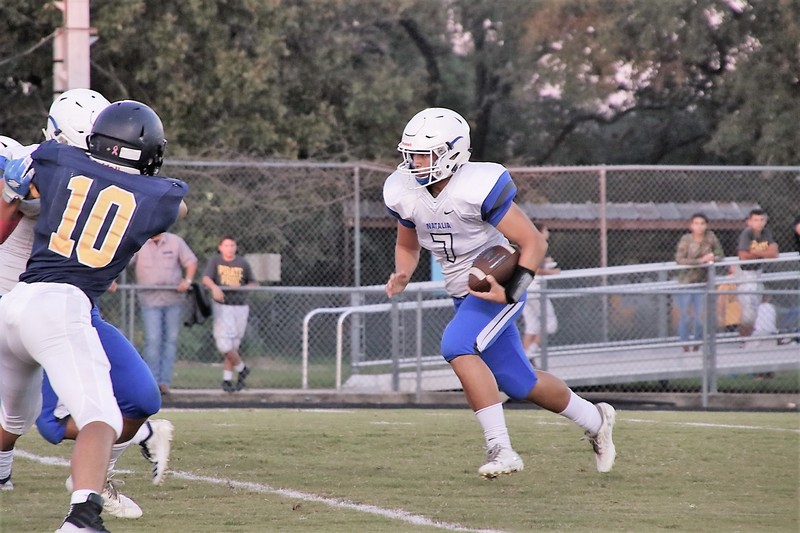 Click here for more photos of the JV Mustangs!

A season ago, the Poth Pirates were only one of two teams to defeat the Natalia JV Mustangs. Last Thursday night, the boys in blue gave the boys from Wilson County a run for their money. Unfortunately, Natalia didn’t finish with the win, but came away with their second tie of the season putting their record at 6-0-2 with two games remaining.
“The game Thursday night had an atmosphere like no other JV game this season,” Coach Jenkins said. “Our players had no interest in the name written on the opponent’s chest, but rather how we played as a team. It was the best team we had played all year and our kids gave their best for the full 32 minutes the clock ran.”
The Natalia Mustangs finished in a 16-16 tie as Adrian Vasquez and Nate Banda accounted for rushing touchdowns for the home squad.
“Our team is playing overall pretty sound football,” Jenkins said. “Occasionally we have some missed assignments, but that is what most teams will have. When we rotate players in, the next one up always takes advantage of that opportunity.”
Jenkins stated his Mustangs will be hungry for another opportunity as they will host the Nixon-Smiley Mustangs this Thursday at home at 5:30 p.m.
By Eric Smith