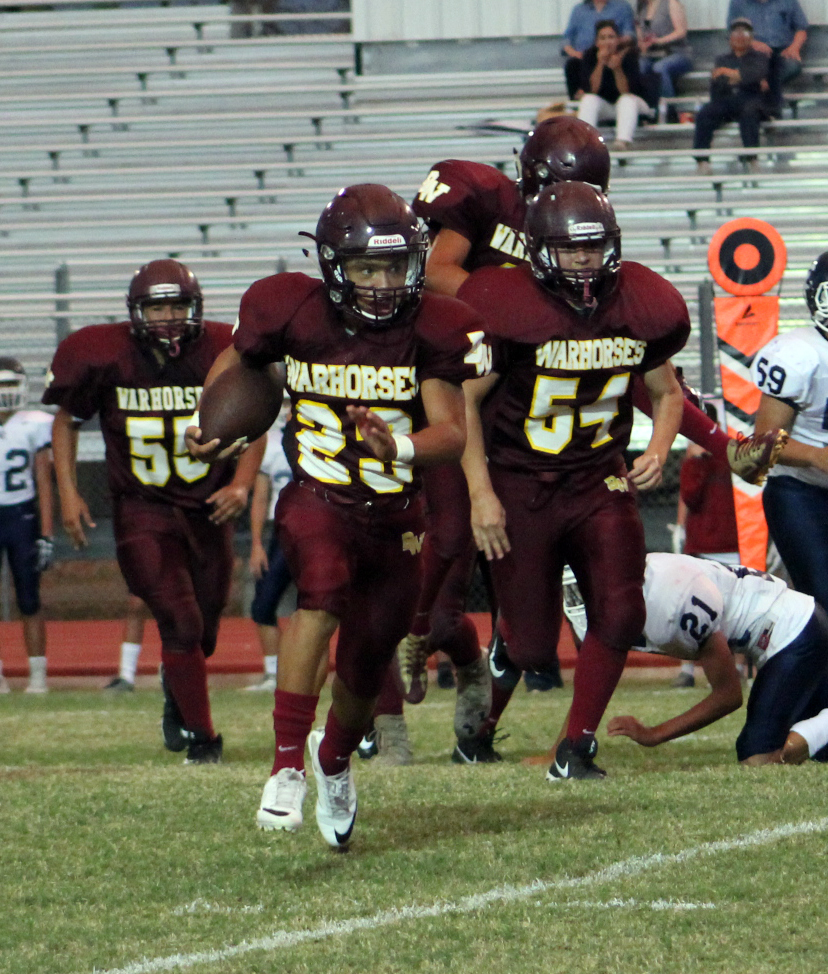 Devine and Carrizo Springs put on quite an offensive show for the folks down in Carrizo last Thursday night. The two teams combined for 84 total points but neither team wound up being able to claim the ‘W’ after the 42 to 42 tie.
Offensive Coordinator Heath Poppe stated the Warhorses “had a chance to win at the end but the offense stalled out on the 20 yard line. We had a penalty that put us behind down and distance that hurt us on our last drive.”
Defensive Coordinator Scott Taylor, “We didn’t get the stops when we needed them. Carrizo scored less touchdowns overall than we did but they capitalized on every one of their 2-pt conversions to make up the touchdown differential.”
Demetrios Monreal and Donavon Camacho provided most of the offensive punch for the Warhorses. Demi scored with 5:03 remaining in the first quarter on a 60-yard counter play. Camacho added the 2-pt conversion to put Devine up 8-0.
Devine recovered their own kickoff and Camacho boosted Devine’s lead to 16-0 with 3 minutes left by rushing for a 6-yard touchdown and adding the 2-pt run. Carrizo bounced back to cut the deficit to 8 by scoring on their own 6-yard run and 2-pt conversion with 7:32 remaining in the 2nd quarter.
Carrizo Springs briefly took a18-16 lead on a Devine safety and a 12 yard run by a Wildcat running back but with 0:47 left in the first half, Camacho scored again on a 16-yard run and added another 2-point conversion to give the Warhorses a 24-18 lead at the break. The last touchdown was set up by a great kickoff return by Monreal.
On the opening drive of the second half, the Wildcats scored on a 30-yard run but, once again, the Warhorses answered the call. Camacho returned Carrizo’s kickoff 80 yards for yet another touchdown. The 2-pt attempt failed but Devine was now up 30 to 26.
Devine’s defense forced a turnover on the Wildcats next possession and turned that opportunity into an 18-yard scoring run by Camacho. Once again, the 2-pt conversion was no good.
Carrizo scored the last touchdown of the 3rd quarter on a 14 yard run with 2:32 left. With the successful 2-point conversion, Carrizo closed the gap to 36-34 entering the last quarter.
Camacho found the end zone one last time on the night scoring from 2 yards out with 5:54 left in the game. Camacho’s 4th touchdown of the game was set up by another Demi Monreal fumble recovery. The 2-pt conversion failed which left the Devine lead at 8. The 3 missed 2-pt conversions throughout the game proved to be the fatal flaw for the Warhorses not being able to claim the win.
Carrizo scored on a 2-yard run with 4:37 remaining and also got into the end zone for the 2-pt conversion. That conversion knotted the score at 42 and it was also the last time either team scored in this wild shootout.
Next up
Due to Poteet not having enough players for a JV and a freshman team, the JV and freshmen will combine to play a single game at Warhorse Stadium on Thursday, October 26. Kickoff is set for 5:30pm.
By Jerel Beaty
Staff Writer