The following City of Devine departmental reports for June were included in Council packets at the July 17 City Council meetings.
Public Works
June saw 170 work orders issued, and 166 completed. There were 100 work orders in the water department, 16 in the street department, seven in the police department, five in the sewer department, three at City Hall, and one at the Devine Municipal Airport. Eleven work orders were after hours, and 23 were line spots.
Water
In June, 13,578,000 gallons of water were pumped from the Edwards Aquifer, and 6,454,000 were pumped from the Carrizo Aquifer for a total of 20,032,000 gallons.
To date, a total of 56,960,000 gallons have been pumped from the Edwards, or 174.80 acre feet of the City’s allotted 911.730 acre feet.
In June 2017, the City pumped 11,107,000 gallons from the Edwards and 6,729,000 gallons from the Carrizo for a total of 17,836,000.
Police
Officers worked a total of 1,659.65 hours in June, including 75 hours of overtime. Dispatch handled 523 calls. Officers assisted other agencies 25 times, including nine calls and seven hours outside of City limits. Other agencies assisted Devine PD 11 times. 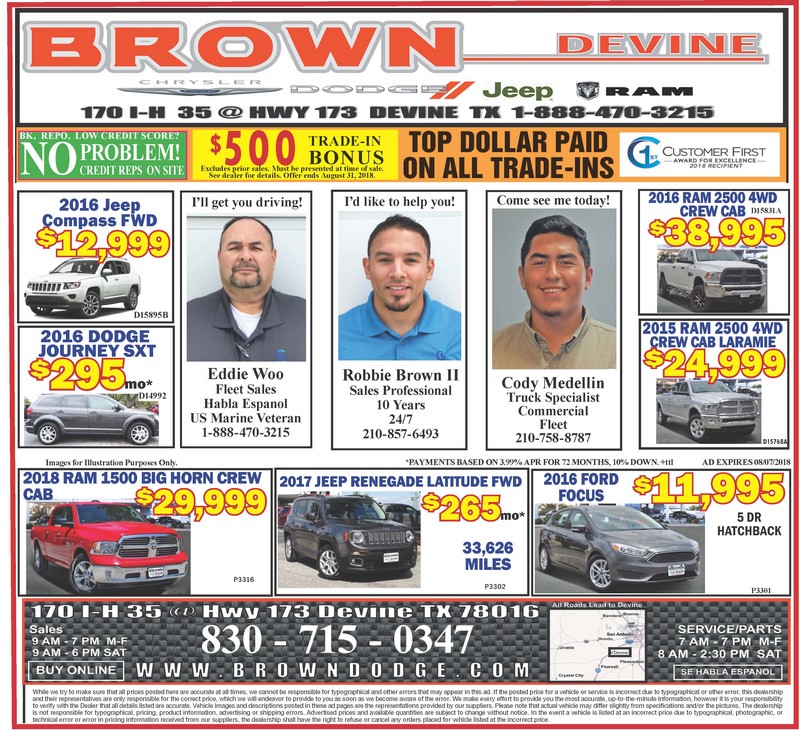 Calls answered included 100 for Animal Control; 54 for talk to an officer; 34 for suspicious activity; 28 each for warrant service and assisting Public Works; 27 for informational reports; 23 for traffic complaints; 19 for miscellaneous; 18 each for disturbances, welfare concerns, and assisting the public; 17 for alarms; 13 for family violence notice issuance; 12 for assisting other agencies; 11 for open door/window; 10 for narcotics offenses; nine for patrol-bys; six each for assisting EMS, minor accidents, and burglaries; seven for escorts; five for assist agency reports; four each for school resource, found property, and civil matters; three each for driving while intoxicated, child abuse/neglect, natural death, major accidents, lost property, theft, and sex offender registration; two each for criminal mischief, assisting Devine VFD, criminal trespass/info, and assault; and one each for emergency warning services, vacation watch, traffic violation, violation of City Ordinance, public relations, animal bite, animal adoption, unauthorized use of a motor vehicle, found contraband, drunkenness, runaway, missing person, and emergency detention.
A total of 53 citations were issued. Traffic citations included 17 for disregarding a stop sign; 11 for speeding; eight for expired motor vehicle registration; four for failure to change address on driver’s license; three for failure to maintain financial responsibility; two for no valid driver’s license; and one each for disregarding a red light, failure to signal turn, failure to yield right of way, no license plate light, failure to dim headlights – meeting, operating a vehicle without license plates, operating an unregistered motor vehicle, driving while license invalid, and expired driver’s license. Non-traffic citations including three for possession of drug paraphernalia and one for littering.
There were a total of 50 arrests, including 28 on warrant service; 10 for possession of drugs; three for possession of drug paraphernalia; two for DWI/DUI minor; and one each for assault, assault – family violence, theft, theft of a firearm, unauthorized use, driving while license invalid, and littering.
Municipal Court
A total of 1,065 cases were on the Municipal Court docket in June. One hundred and sixteen cases were disposed, and 91 cases were placed on inactive status. A total of 2,316 cases were pending at the end of the month.
Three active civil cases are pending. One juvenile transportation code case was filed.
A total of 41 arrest warrants were issued, including 35 for Class C misdemeanors, three for Class A and B misdemeanors, and three for felonies. Thirty-two capiases pro fine were issued. One case settled fines and court costs by community service, and five were settled by jail credit.
A total of $19,589.09 in fines and court costs were collected, $13,938.41 of which was kept by the City, and $5,650.68 was remitted to the State.
Animal Control
Animal Control responded to 102 calls. Four foxes, one bird, two snakes, and a baby skunk were picked up and released into the wild, and one fox was sent for testing. One animal bite was reported, one animal was returned to its owner, 20 animals were adopted, and 12 cats and 14 dogs were euthanized.
Driscoll Public Library
A total of 2,342 items were checked out in June. Public access computers were used 298 times, 28 new library accounts were opened, and 75 library cards were issued. Programs and classes were attended by 756 people.
As of July 2, 47 children had returned a total of 126 completed Summer Reading Challenge logs. Nineteen children had earned white medals, seven had earned red, and three had earned blue (eight completed reading logs returned).
By Marly Davis
Staff Writer 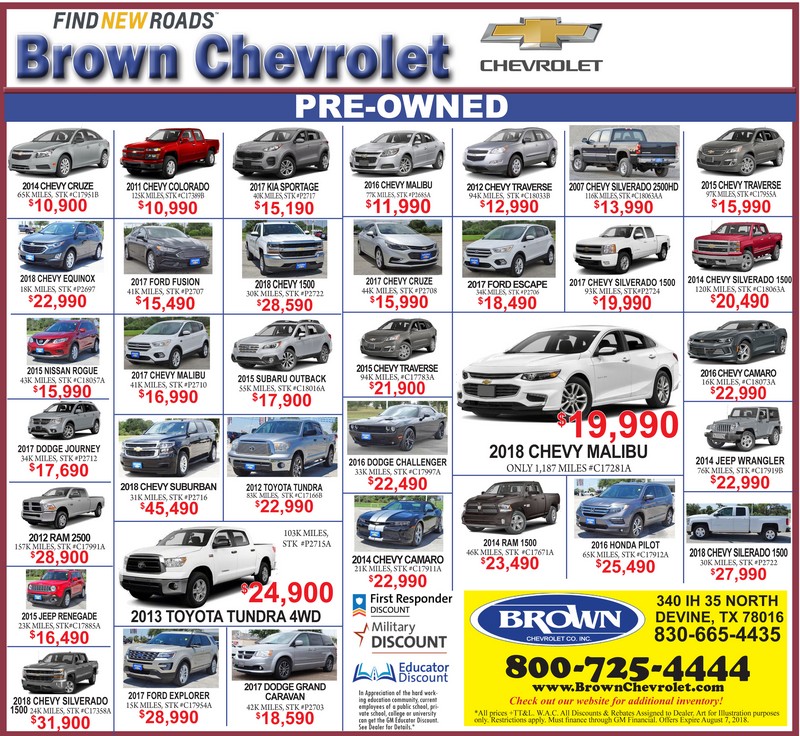