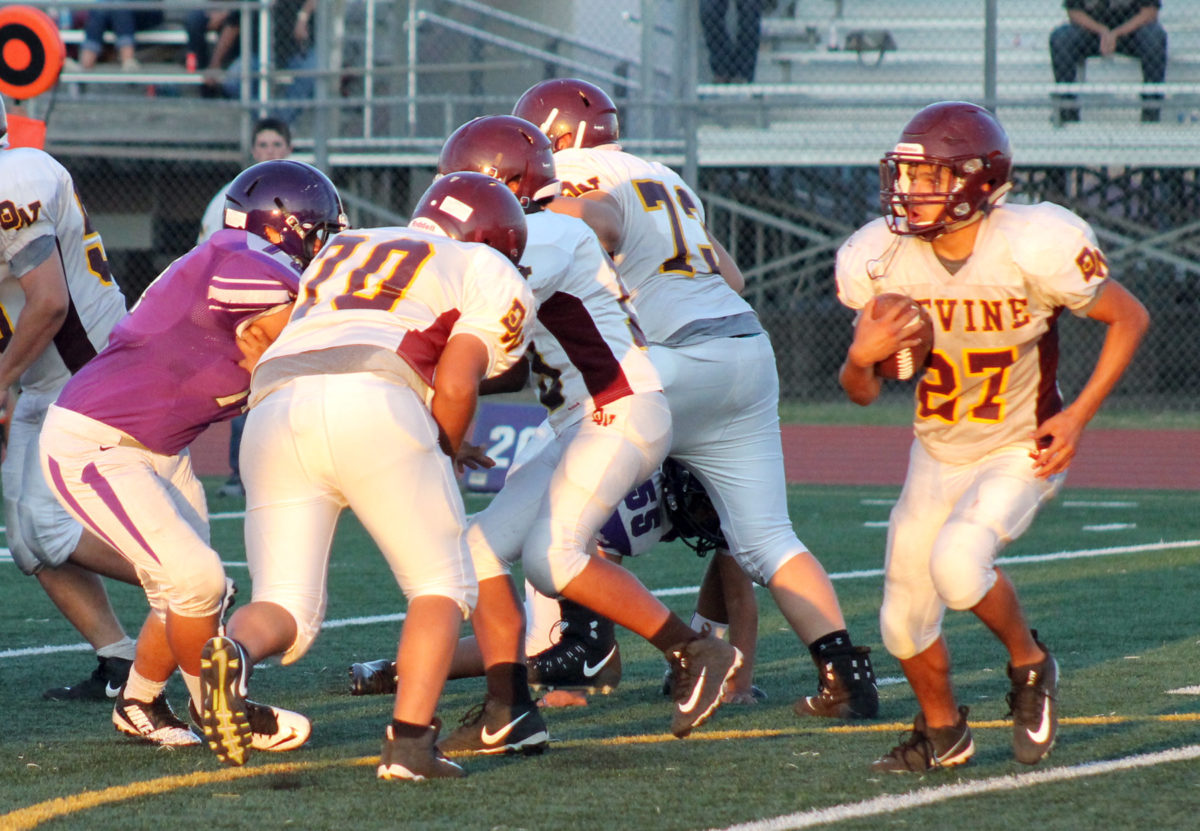 The Devine Warhorse freshman team had its hands full last Thursday evening at Greyhound Stadium as they took on Boerne to begin their 2017 campaign. The Warhorses had opportunities to score throughout the game but could not capitalize on those chances, eventually losing 30-6 to begin their season 0-1.
“We came out marching down the field on our first two possessions but we just didn’t finish the drives,” stated offensive play-caller Coach Bart Oropeza. “Justin Contreras ran the ball really well, gaining a bunch of yards on each carry. Xavier Martinez had two receptions for big yards, with one resulting in a touchdown. Quarterback Collin Dishman did a good job directing the offense. Overall, we did some good things but there are plenty of intangibles to work on and improve so we can have a better outing.”
In spite of surrendering 30 points, good things did come out of the game according to defensive signal-caller Coach Juan Gonzalez. “I think we did some really good things overall. I know the score does not reflect that too much but we did have them 3rd and long and 4th and long many times, they just happened to make a big play when they needed it. They had a couple of lucky bounces go their way that could have easily been turnovers.”
“Our biggest letdown of the night was our tackling. Countless times, we played the run/pass perfectly, but could not wrap up to make the tackle on first contact. Our secondary unit defended their passing game very well, but, as mentioned, we missed tackles from all positions. We will go back to work, improve, and we will be ready for San Antonio Brackenridge.”
Defensive ends Christian Gerlach and DJ Dzierzanowski had several of the tackles that were made. Jaden Ramirez was the iron-man of the game playing a majority of the snaps offensively, defensively, and special teams.
The game was still within reach at halftime as the Horses fell behind by only 14 points; Boerne scored one touchdown in each of the first two quarters. It was a 22-6 contest going into the fourth before the Greyhounds added one more score to put the game out of reach.
The Horses travel to San Antonio Brackenridge Friday, September 8 to take on the Eagles. Kickoff is set for 5:15 pm.
By Jerel Beaty
Staff Writer