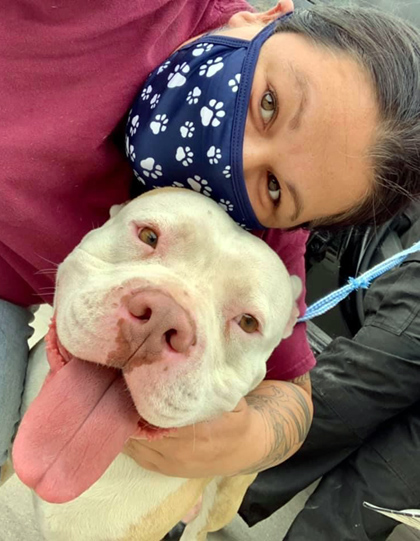 In the last year, Friends of Devine Animal Shelter, a facebook page made to advertise dogs for adoption, has brought the Devine shelter into the modern age with a social media presence to spur adoption of stray animals. This page has lowered the euthanasia rate rapidly, as dogs are leaving the shelter much quicker.
“The Devine animal shelter does an amazing job trying to find a safe place for lost and abandoned animals to live,” Mrs. Jodi Dzierzanowski, who runs the facebook page says. “Crystal goes out of her way to find rescues or homes for these pets. Their euthanization rate has decreased by well over 90% due to this lady’s efforts.”

Crystal Rodriguez, an animal control officer and correspondent to the Facebook Page, came up with the idea of the page after seeing how often people put up dogs for adoption through facebook.
“I have a few friends in different animal control departments and they do a wonderful job helping us out. If there’s a dog that we just can’t get adopted we’ll call them and they’ll do the same for us,” Mrs. Rodriguez said. “The younger generation though, is much more tech savvy. When most of these young kids are looking for pets they just go on and say “Hey! Anybody have a dog that they don’t want?” Having something online for them to find right away is very helpful.”
Though Mrs. Rodriguez came up with the idea for the page, she was unable to start it, as the Devine Shelter isn’t allowed to direct run their own adoption page.
“A former ACO (Animal Control Officer) tried before to start a page, but she had trouble keeping it updated, so the city council eventually decided it would be better that we not have one at all,” Rodriguez said, “When I got into contact with Mrs. Dzierzanowski about a facebook page, I basically told her ‘I can’t do it, but if someone were to start a page for us, that would be ok.’ She graciously volunteered.”
Now, Mrs. Rodriguez provides pictures and info of dogs available for adoption or whose owner might be looking for them, and Mrs. Dzierzanowski runs the facebook page by making posts about these dogs.

“Crystal asked me if I would start up a ‘Friends of Devine Animal Shelter’ Facebook Page in order to help find homes for these animals,” Dzierzanowski said. “Of course I could not turn that down. It makes me very proud to be a part of something that does so much good for our community.”
For those who visit the page or look to adopt elsewhere, Rodriguez stresses that you do your research and preparation.
“Make sure you know what you’re getting into when adopting. It’s an investment; it’s not just a pet, it’s family, Rodriguez said. “You can’t just throw them in the backyard and expect them to take care of themselves, and we don’t want people getting rid of a dog in a year when they’re not so cute and fluffy.”
By Noah Davila
Staff Writer