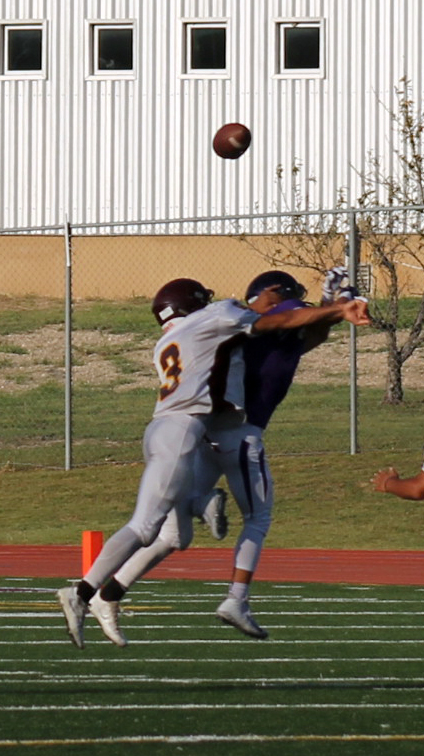 Freshman Offensive Coordinator Bart Oropeza recapped last week’s 40-22 victory at LaPryor, “Xsavior Martinez started the scoring onslaught with a 60-yard punt return in the 1st quarter. Then, he had a 50-yard rushing touchdown in the second quarter. Armando punched in the 2-point conversion. Armando also had a 4-yard rushing touchdown in the first half. Xsavior had an interception for a 60-yard interception for a touchdown in the second quarter. Xsavior went on to score a 60-yard receiving touchdown, and had another interception for a touchdown later in the game along with a 2-point conversion in the second half.
Other offensive players that played well were Jaiden Ramirez who had to two receptions. Devin Ornelas did a good job of blocking for the running backs.
Defensively, Jaden Ramirez and Armando had interceptions including the two interceptions from Xsavior.
The guys showed up for this game offensively and defensively. We will continue to improve.”
Freshman Horses fall to Javelinas 30-6
With the Carrizo Springs football program not having enough players to field a freshman team, the Devine freshman traveled to play the Crystal City Javelinas last Thursday. It was a rough night for the Warhorses as a close 8 to 6 deficit entering halftime quickly snowballed into a 30 to 6 loss.
The only touchdown on the night came on a 1-yard quarterback sneak by Mason Burford. Setting up their only score was a long run after a reception by Xsavior Martinez from Burford.
“We struggled defensively,” stated Defensive Coordinator Juan Gonzales. “We have multiple kids playing positions they have never played and have had little practice at those spots. I am proud of the kids stepping up and their willingness to play wherever we need them. Sometimes we have to switch them at the last minute due to injuries. The boys gave great effort the entire game, but unfortunately we didn’t get the win.”
Next up Thursday at home
Due to Poteet not having enough players for a JV and a freshman team, the JV and freshmen will combine to play a single game at Warhorse Stadium on Thursday, October 26. Kickoff is set for 5:30pm.
By Jerel Beaty
Staff Writer