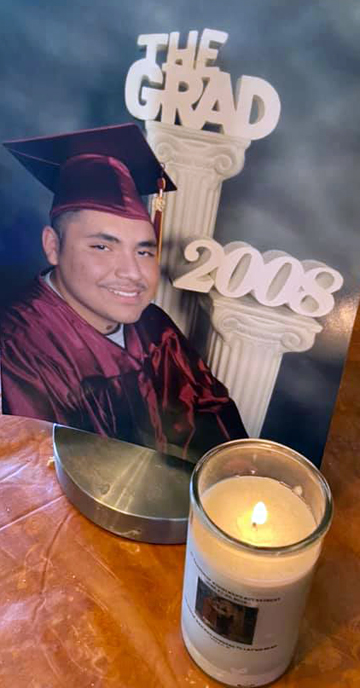 Lorenzo Moralez, Jr., a 2008 Devine graduate, is currently hospitalized in SA. His mother Melissa Moralez shared the family’s first-hand experience showing the way the surge is affecting patient care, as hospitals, doctors and nurses are simply overloaded with patients at this point. Her son Lorenzo was originally in a small rural hospital, and when he needed higher level of care as many Covid patients do, things started taking a turn for the worse. They humbly ask for continued prayers from the community they love so much, as his battle is still “far from over”.

Mrs. Moralez stated: “A mother’s worst nightmare is watching her child helpless and not being able to help them. That is the nightmare I had to face this past week with my son, Lorenzo Moralez Jr. On August 12, 2021, we found out he came out positive with Covid, and little did we know, at 31 years old, he was in for the battle of his life.
“He had started feeling sick four days before. He started not feeling good on August 8, started running fever on August 9, went to the hospital in Jourdanton to get tested on August 10, and we found out two days later, the test was positive. The following three days, he was in and out of Frio Regional Hospital in Pearsall where he was later admitted to on Sunday, August 15. The next four days were a complete nightmare. As a mother, you want to take away the pain, worry and hurt that your child feels, but I could not do that.
“Tuesday the 17th, things took a turn for the worse. We received a phone call from him crying begging for help. He was unable to breathe and was afraid that he was not going to survive. His oxygen levels got down to the low 70s. Our son was literally suffocating. The hospital he was at could not handle the capacity of oxygen he needed; they could only do a max of 15 liters of oxygen and said after that, they would have to transfer him. The only problem with that is my son needed 70 liters of oxygen to even feel some type of relief and there was no availability at any major hospital.
“At one point, the doctor told me that if they could not find a hospital fast, my son would have to be put on a ventilator and eventually, on life support. Those are the words no mother ever wants to hear about their child. I felt hopeless. There was literally nothing I could do. I was going to lose my son. We were going to lose our child. All we could do was pray!
“On the 18th, he was moved to a room where he finally became somewhat stable. At this point, they found a way to provide my son with 60 liters of oxygen temporarily. Still more than what the rural hospital could administer on regular basis. That is when we asked for the help of our local community to help pray for our son, for him to find the strength to keep fighting. For healing. Then we got the call.
“On Thursday the 19th after four days with little to no oxygen, a bed had finally opened up and he was being transferred to Methodist Stone Oak Hospital. We are sure that it was the power of prayer that he was being moved.
“The transfer was not an easy one either. They had to change out his mask and lower the oxygen to 15 liters, he was on 60. When he arrived, his oxygen was still low and he started to experience anxiety. They were not able to provide him with any medication until 5am the next morning. The next couple of days, things were still uncertain. He would experience cough attacks where he was unable to catch his breath. The nurse explained that he would sometimes have good days and sometimes bad. We were still unsure if our son would be coming home. So we continued to ask for prayers.

“My son’s nightmare began 16 days ago and is still far from over. He still has a long road to recovery but he is getting better day by day. I do believe in the Power of Prayer and he could not have made it this far without your prayers. Please be safe everyone, this virus is real. My family knows first-hand.”
The love of his life and six young kiddos are anxiously awaiting daddy to return home to Pearsall where Lorenzo Jr.’s family now resides.
“At the hospital where he is at now, I’m told they have three floors of Covid patients. They break them down as the ICU floor, the Critical floor, and the bottom floor for patients who are stable. Right now, my son is on the middle floor.”
“I do also want to say that the amount of people from the community who have reached out to message or call and support us at this difficult time has just been amazing,” Mrs. Moralez said. “You are amazing.”
By Kayleen Holder
Editor