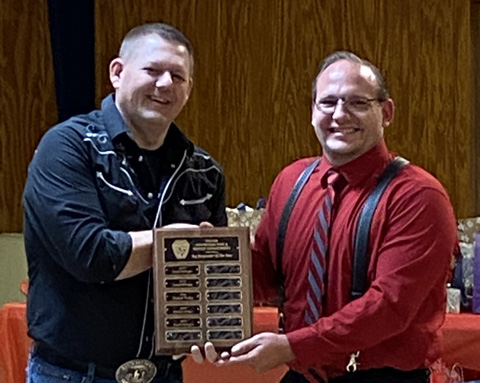 Top Responder of the Year, which goes to the person that made the most calls of the 527 to date. Daniel Ehlinger was the Top Responder with an amazing 42% of calls made.

This year Devine has seen our local Volunteer Fire Department take great leaps and bounds. The Devine Volunteer Fire and Rescue Department, under the direction of the Emergency Service District 2 Board, has seen 18 members reach new certifications. They have started a new Fire and EMT academy that will bring several new fire and medical responders to the area. They are in the midst of creating a pathway to a career in firefighting or EMS for high school juniors and seniors at Devine High School. ESD 2 just added on to the firehouse that was built just two years ago to accommodate the growth of the department. DVFD has added a full-time training coordinator to their volunteer team, as well as a grant writer to offset financial needs of the department. DVFD responded to more emergencies this year than ever before in the 92 year history of the Devine Volunteer Fire and Rescue Department.
So we asked Chief Atkinson what he attributed the growth and change to.
“Our people,” Chief Atkinson said. “That’s as plain as it gets, we have hungry, excited people that want to see us grow and do great things for the community. We have more members of our community getting involved, we have rebuilt relationships, we have expanded the vision of what we could do as a department, and our people have caught the vision with excitement and ran with it.”
So how have your volunteers responded to the extra workload? Chief Atkinson explained. “When you have 10 people doing everything it is hard to grow, but when you have 24 people doing 24 different jobs and working as a solid unit, it actually relieves the workload,” Chief Atkinson said. “Don’t get me wrong, our people still work extremely hard and there are days that we are all dragging tail home when it’s been a long day or week. When you get more people involved however, everyone feels more invested and the workload doesn’t seem to be as heavy. It’s the philosophy of which is heavier, 10 people carrying 100lbs or 24 people carrying 220 lbs? We are doing more as a department because the more people who get involved and help carry the load it makes the work easier to carry.”
Well we want to recognize the best of this exceptional team. The DVFD end of year awards were given out at their annual end of year holiday soiree on December 11th.
The first award is the Top Responder of the Year, which goes to the person that made the most calls of the 527 to date. Daniel Ehlinger was the Top Responder with an amazing 42% of calls made.

The next award was the Firefighter of the Year. Chief Atkinson expressed this was the hardest award to decide on because so many great people have made an impact on the growth of the department. Eventually however it was decided that firefighter Melanie Dossey had made the biggest impact on the year. Melanie now heads up the rope rescue team; she sits as a secretary on the board until January, and is the medical administrator for the department. Chief Atkinson said, “Melanie has taken huge strides not only in perfecting her craft and learning more about her abilities as a firefighter, but also in driving the department forward. She is deserving of the Firefighter of the Year award and it was an honor to present her with that award.”

The final award is the Rookie of the Year, the newcomer who comes in and makes the biggest impact right away. This year that person was Scott DeLucia. Chief Atkinson told us, “Scott has a background in the military and in veterinarian care. His medical background along with instructor background, and willingness to learn and dive right into the fire side of what we do made him the absolute choice for Rookie of the Year.”
What an amazing cast of members we have protecting ESD 2 and the city of Devine. We want to extend our congratulations to the entire Devine Volunteer Fire Department. Especially to Top Responder of the Year Daniel Ehlinger, Firefighter of the Year Melanie Dossey, and Rookie of the Year Scott DeLucia.