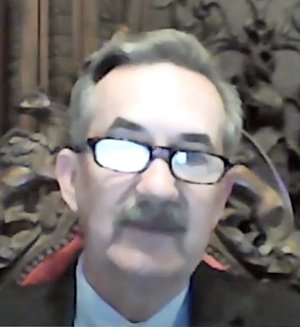 Our very own local doctor, Dr. Richard Neel, MD, MPH was chosen to speak on a panel of several doctors, scientists, and researchers from all over the world this past Tuesday, December 1. When we first interviewed Dr. Neel this past March, about the idea that melatonin could be used to treat the virus that has resulted in a worldwide pandemic, it was just a really big idea. But when the first COVID patient came to him, this retired Air Force doctor who also holds a MPH and many other accolades, quickly put that big idea into action with remarkable results. He has since fielded calls from all over the US and all over the World.
At the international teleconference this past week, doctors, scientists and researchers discussed melatonin as a treatment for COVID-19, and we are proud to report that our courageous local doctor was introduced as the world’s leading physician in this subject area, having treated more than 1,000 patients using his recommended regimen of high dose melatonin, vitamin C, and vitamin D.
Dr. Harold Pupko, President of the North York branch of the Ontario Medical Association in Canada, was the mediator of the conference. The association is made up of 500 Canadian physicians of all specialties.
“One of my mandates as president is to promote the exploration of medically innovative ideas and to try to break down the barriers that stand in the way of delivering those innovations to our patients. Tonight is an example of putting those principles into action….Tonight we will have an opportunity to hear from 4 distinguished speakers,” Pupko said.
The first speaker was Dr. Russel Reiter, PhD of San Antonio, Professor of Cell Biology, who has 4 honorary Doctor of Medicine degrees, 1 internationally recognized science degree, and many other accolades for his important research. Reiter is listed in the top 1% of world scientists in terms of published research works. He discussed the scientific process by which melatonin helps covid patients (in words and terms best understood by scientists).
After his presentation, he also answered questions from doctors and researchers.
Among those conversations, Reiter stated, “Melatonin is not a perfect molecule, there’s no such thing. But I think it’s the best thing we currently have for treating covid and likely some other conditions….with certainly less toxicity than many other drugs we currently use.”
“No overdose of melatonin has ever been reported to the extent that people have died, or even an animal from too much melatonin,” Reiter said. “And many studies have been done in attempt to identify what is referred to as the ‘lethal dose’ for animals, but that ‘lethal dose’ has never been established,” despite research efforts.
Dr. Richard Neel was the second speaker, and he was introduced by Dr. Pupko, “Tonight we have an opportunity to consider what we call a paradigm shift. What if covid could be treated in the community, avoiding the need for hospitalization as much as possible?”
“Since March, Dr. Neel has been putting this theory into practice and has to my knowledge, more experience doing that than any physician in the world,” Dr. Pupko said.
“It is an honor and a pleasure to be part of this panel tonight,” Neel said. “I have been treating covid patients with melatonin since March…We have treated well over 1,000 patients, and also patients with all of the co-morbidities who have also done well. Patients with diabetes, COPD, Asthma, Cancer. I’ve treated patients from 11 months old – all the way up to patients in their 90s.”
“One of the great things about melatonin is its versatility in dosing. I roughly dose at 1 mg per kg per day. For most patients that works out to about 100 mg per day. Most patients I’ve found preferred to take roughly 20 mg three times a day and 40mg at bedtime.” (Doses for children and pregnant women were discussed separately.)