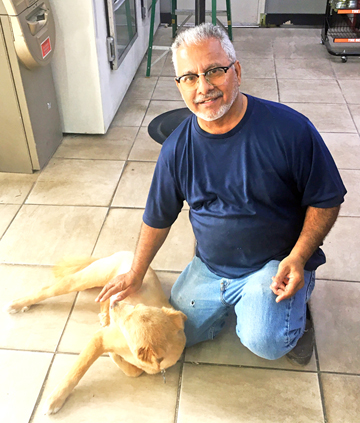 On Sunday, March 28th, the Super Mart was saved from an electrical fire when the owner’s dog alerted him to the smoke. The dog, Khalessi, ran from the back of the store and went in circles, whining and trying to get her owner’s attention. Sam Hussain, who has owned the store for 7 years now, then saw the smoke coming from the ceiling.
“She led me back to the breakers,” Sam said. “I noticed smoke coming from one of the boards in the ceiling, and when I flipped it over black smoke came gushing out.”
Old wiring had caused an electrical fire in the ceiling, and had begun spreading to the store’s insulation. Mr. Hussain grabbed a fire extinguisher and put the fire out immediately. The fire department was then called to the store in case of another fire.
“A good relationship with any animal can be very beneficial, as in this case,” firefighter Shelley Watson said. “Because of Khalessi the business was saved. Had it come to active flames before being detected, things may not have turned out so well.”
Fire Engine 8220 and Command 8120 reported to the store, with firefighters Shelley Watson, Daniel Ehlinger, Assistant Chief Richard Hickok, Chief Greg Atkinson, and Captain Mike Saldaña. Because of the possibility of another fire, the responding firefighters pumped oxygen into the store, hoping to light whatever ember may be hidden.

“The fire started from an electrical wire failure in the ceiling from some new lights and old wiring that created a smolder,” Chief Atkinson said. “With a small smolder, oxygen and heat can set it off, so we were afraid to leave without knowing where the smolder was. We did eventually find it and put it out. Sam had an electrical company out for 6 hours the next day, and reopened that evening with no problems.”
This is the second time Khalessi has tried to protect Mr. Hussein and his family.
“4 years ago, my son had an asthma attack in his sleep, and she came running down the stairs to me at 4 in the morning,” Sam said. “She grabbed me by the sleeve and dragged me, really dragged me, to his room.”
Sadly, his son had passed away before they got to him. Since then, Sam has been incredibly close to Khalessi. She has become a staple of the Super Mart, coming to work with him every Sunday.
“All my customers know Khalessi, and they know exactly what day she’ll be here,” Sam said. “If she’s not there, everyone asks ‘Where’s Khalessi? Where’s Khalessi?’”
It would be Khalessi’s Sunday staple that would save the store. If the flame had gone unnoticed for a few more minutes, it could have spread too quickly to stop, and the entire store could have burned down.
“One of my employee’s always brings Khalessi a New York steak, every Sunday.” Sam said. “Now she says Khalessi’s earned two.”
By Noah Davila
Staff Writer