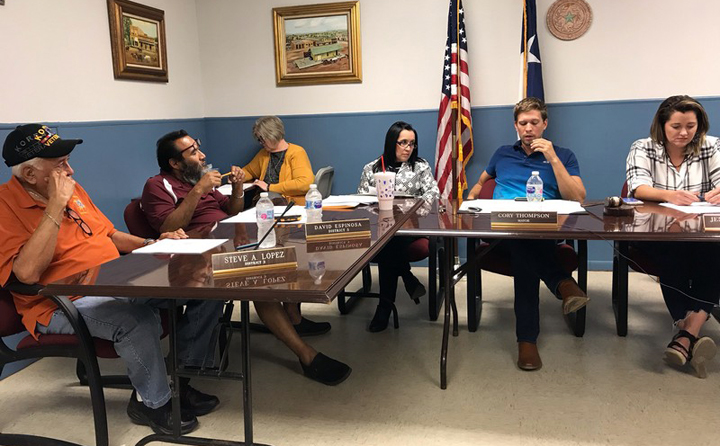 The issue of District 5 representation was on the agenda of the Devine City Council meeting on press night, September 17, after a decision on the matter was once again postponed at the Special meeting held last Tuesday, Sept. 10.

The press night meeting agenda featured an item to discuss and consider appointing/interviewing someone for the District 5 seat, followed by an item to discuss and consider ordering a Special Election for the seat.
Results from the meeting will be in next week’s edition of The Devine News.
At the Sept. 10 meeting, District 2 Councilman Steve Lopez moved to postpone taking action on the District 5 seat, as George Valdemar wished to be considered for the position.
“I am requesting it to be added to the following Regular meeting on Sept.17 to discuss, consider, appointing and interviewing a person to District 5’s vacant seat,” Lopez said.
The meeting agenda specifically called for appointing Parks Board Chairman Debra Randall, meaning no other candidate could be nominated.
“Y’all know that y’all do have the ability to go ahead and decide yes or no on Debbie Randall tonight and make a vote,” Mayor Cory Thompson said.
When Lopez replied that he couldn’t vote on the matter that night, Thompson said he had the information that Council had previously requested regarding the questionnaires that Randall and Valdemar answered.
Thompson was appointed mayor during an emergency meeting on July 19 after then-mayor Bill Herring resigned. During that meeting, Thompson expressed the wish that the Council appointee to his vacated District 5 seat be someone who would vote like himself.
Thompson initially recommended Randall for the District 5 Council seat in a Special meeting held August 27, based on a 13-question questionnaire he developed that Valdemar and Randall both completed. Council unanimously postponed making an appointment at that meeting (District 1 Councilman David Valdez absent) after deciding they wished to look over the questionnaires before making a decision.
As mayor, Thompson can make recommendations to Council, but can’t make a motion or provide a second on an agenda item, and can only vote if there is a tie.
District 3 Councilman David Espinosa provided a second for Lopez’s motion “due to lack of trust.”
After the motion to postpone passed 2-1 over the objection of District 4 Councilwoman Jennifer Schott, she asked why Lopez and Espinosa had postponed the issue again.
“His recommendation is still current,” Espinosa said. “His recommendation is one thing; the appointment is a whole different thing. His recommendation is good; it’s going to be considered. But there’s a question of folks who have other interests in this position too.”
Schott said she was under the impression that Council had agreed to appoint Thompson’s recommendation.

“I thought that we all understood it that way, at least I took it, that it wasn’t going to be a recommendation, that we were kind of allowing him to choose the person for his seat,” Schott said. “Yes, based on our vote, but I felt like we all kind of knew what he meant that day.”
Thompson said Randall’s name was specifically on the agenda to avoid chaos in the meeting.
“That is not in any way beneficial to this City Council, to this City,” Thompson said. “If we want to put a person’s name directly on there, that’s fine, but we cannot have chaos like that.”
Thompson repeated that he had the information that Council had asked for, and said he hoped they had time to look through it and make an informed decision.
“We have an argument over not filling this position, but then again tonight we’re not filling the position,” Thompson said. “So if somebody wants to get up here and say that we’re delaying, or I’m delaying, put it on me, I’ve asked. I’ve asked now.”
Schott expressed concern over whether or not Thompson’s recommendation would be taken into account.
“You say it will be considered, but I don’t really feel like it has,” Schott said. “Every time it’s been his recommendation has been on the agenda to be considered, it’s been stopped.”
“But having just one recommendation is pretty much like he’s already appointing,” Espinosa said. “And I think that we deserve the opportunity.”
By Marly Davis
Staff Writer