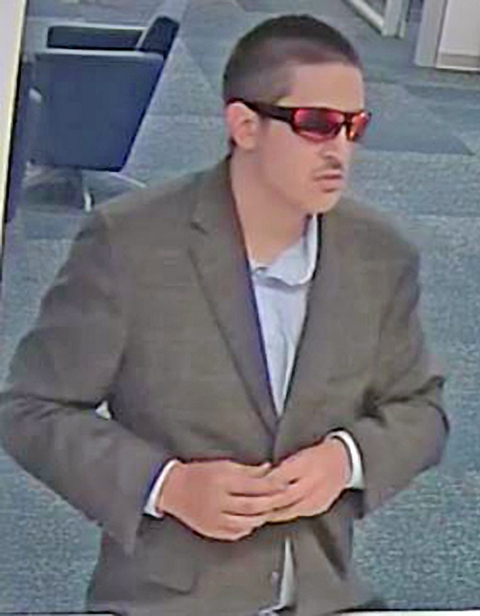 The FBI San Antonio branch shared this press release with us for a wanted armed bank robber, who they believe may be in the San Antonio or Austin area.
Up to $5,000 Cash Reward (HOUSTON, TX) – The FBI Violent Crime Task Force needs the public’s help identifying and locating a flashy bank robber, dubbed the “Dapper Desperado,” who committed his second known armed robbery on August 31, 2019. Crime Stoppers of Houston is offering a reward of up to $5,000 for information which leads to the identification and arrest of the robber.

The robbery occurred at approximately 12:47 p.m. on Saturday, August 31, 2019 at the Wells Fargo Bank located at 1201 North Main Street in Victoria, Texas. The suspect entered the bank dressed in a grey blazer and sunglasses, approached a teller, briefly pulled out a gun, and verbally threatened the teller while demanding cash. The robber left the bank on foot with an undisclosed amount of money. No one was physically hurt during the robbery.
The robber is described as a white or Hispanic male in his early 30s, approximately 5’10” tall with a medium build. During the robbery, he wore a red hat, red t-shirt, grey blazer, blue jeans, and reflective sunglasses.
This suspect is believed to have previously robbed a Comerica Bank located at 14104 Northwest Freeway in Houston, Texas on August 29, 2019. During that robbery, the “Dapper Desperado” wore an oversized brown suit, an oversized light blue dress shirt, gray Converse sneakers, and reflective sunglasses. Photographs of the bank robbery suspect are attached. They can also be found on Twitter @FBIHouston.
Crime Stoppers of Houston is offering up to $5,000 for information leading to the identification and arrest of this robber. If you have any information, please call the Crime Stoppers tip line at 713-222-TIPS (8477) or the FBI Houston Field Office at (713) 693-5000. Tips may also be submitted to Crime Stoppers through their website, www.crime-stoppers.org, or the Houston Crime Stoppers mobile phone app which can be downloaded for both iPhone and Android devices. All tipsters remain anonymous.