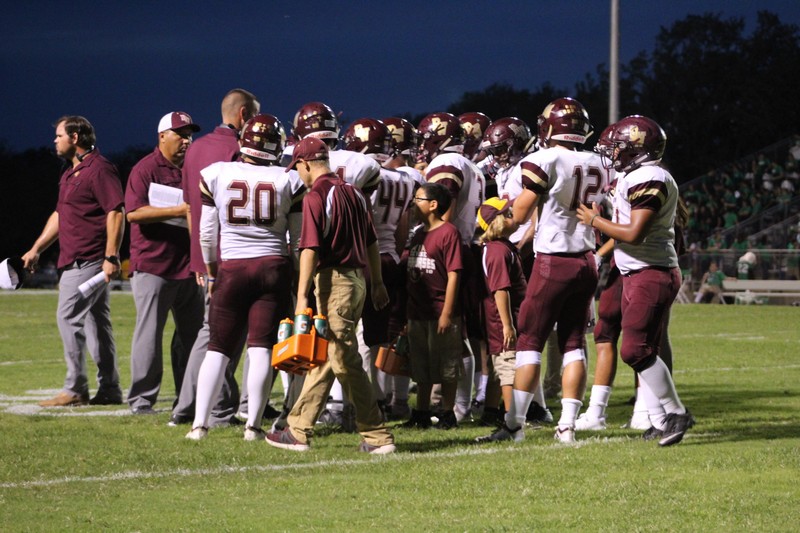 Click here for photos of the Warhorses vs. the Eagles

Although the Devine defense ‘held’ Pleasanton Eagle quarterback Johnny Zamora to 172 passing yards which was 181 yards under his 354 yards-per-game average going into Friday night’s ballgame, Zamora still connected for five touchdown passes on the evening. Four of those five TD throws were to junior receiver Dalton Hobbs.
“Defensively we struggled a bit with the passing machine of Pleasanton,” stated Warhorse Head Coach Paul Gomez. “Facing this type of offense and veteran players like Hobbs and Zamora, our goal was tochange up our looks defensively. At times, we sent heat while other times we just played zone hoping that their offense would not get a good look against us.
Defensive Coordinator Coach George Villa had a good plan going in. There were times we had good coverage but the speed of Zamora allowed him to scramble out of the pocket to either run for good yardage or check down to his third or fourth options and make the pass.
Then, having to defend Hobbs who is out there at 6’4” with great hands was difficult for us to do because Zamora would throw to where only Hobbs could catch it. There were times when we had Hobbs covered and he still made the catch.
Last week, I mentioned that this would be the best quarterback and receiving corps that we would face all year, and they were just that.
Special Teams had its share of good and bad plays. Sergio Martinez made his first field goal of the year after our first touchdown and Chad Lawson had a couple of great punts. Sergio’s first kickoff was perfect but his second one went out of bounds. We are looking for moreconsistency in that department.
Our coverage on punts could have been better. We will change some things in that area to become better. We also need to do a better job of blocking on our kickoff returns. Our special teams will get back on track. It could be a good weapon for us.”
By Jerel Beaty
Staff Writer