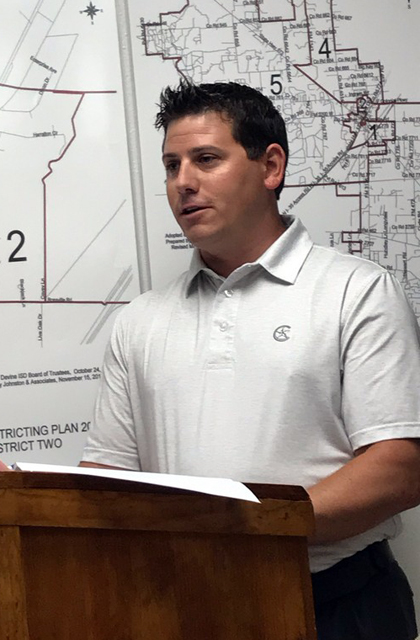 The Devine City Council voted to continue discussions with Scott Grego on a potential deal to allow him to lease and privately run the Municipal Golf Course under the SG Management banner after reviewing his proposal during a Special meeting held on September 12.
Grego’s proposal asked for the City to pay the course’s expenses for the first six months of operations, reimburse the cost of making bathrooms ADA-compliant, and reimburse the cost of bringing the clubhouse up to operational standards, which he estimated at between $175,000 and $200,000.
Other concessions included City-provided signage on highways around Devine, as well as the approval of beer, wine, and liquor licenses for the clubhouse and golf course.

District 3 Councilman David Espinosa thanked Grego for bringing his proposal, as well as residents for attending the meeting and sharing their thoughts.
“That’s what we need,” Espinosa said. “We need some kind of sense of direction. I’ve got issue going forward with this. I know there are a lot of legalities that need to be looked into and what have you, but I would like to see it go forward. We just have to make sure all the I’s are dotted and T’s are crossed before we go forward.”
Espinosa asked if Council thought it would be advisable to get a committee together to make sure the lines of communication stayed open.
“I’m not opposed to having a board, but I’m not going to say I’m going to listen,” Grego said.
Mayor Cory Thompson asked what Espinosa wanted a golf committee to be tasked with.
“At this particular time is just to do the research and what we want to accomplish at this point to move forward,” Espinosa said. “Of course they’ve got to get with Tom and Dora [Rodriguez, Interim City Administrator], whatever legalities that we’re going to encounter, that we get through those as we go through them and come out to the final result on that. For everybody’s purpose, for the purpose of the community. I just don’t want this thing to fall back and nothing starts happening again.”
Thompson pointed out that it took two months to get the Parks Advisory Board together after it was initially proposed during a Council meeting, and Munoz asked if the Parks Board could handle what Espinosa was asking for.
“I’d take it in a heartbeat,” Parks Board Chairman Debbie Randall said.
“Debbie will do a great job,” Espinosa said. “She’s going to go forward with it, I know she will.”
A Schott-Espinosa motion to continue discussion with Grego and to allow the Parks Board to give Council recommendations about the course passed 3-0 with District 2 Councilman Steve Lopez’s support.
District 1 Councilman David Valdez was absent, while the vacant District 5 seat was set to be addressed again at the Regular meeting scheduled for press night on Tuesday, Sept. 17.
The golf course was also on the agenda for that meeting, Specifics to be discussed included advertising with Golf Insider magazine and local newspapers, as well as new daily greens fees.
By Marly Davis
Staff Writer