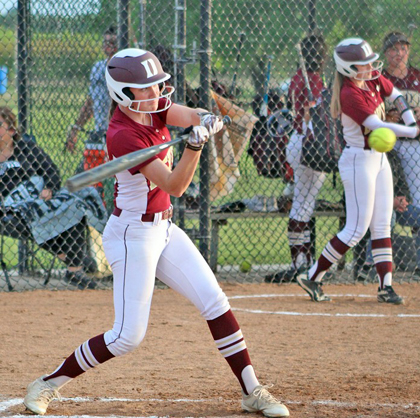 In one of the their last road games of the season, the Arabians faced Carrizo Springs on April 5th and won 7-2 after seven innings. “Defensively we played another great game committing no errors and turning one double play behind winning pitcher Isabella Gutierrez. Bella did a good job for us in the circle. Our hitting started off slow, but we managed to get some timely hits to drive in runs. We struggled staying on top and driving the ball the majority of the game. We need to make the adjustment sooner than what we did Friday night. With that being said, the coaches and I are very proud of the girls. Go Arabians!” said Coach Juan Gonzalez.
Top of the second, with Isabella Gutierrez on third, running for Catcher Allison Taylor, and Jenaee Wofford on second, Julie Ortiz hit a double to center and brought them both home and put Devein on the board at 2-0. Top of the fifth, Jeanette Rios on third, Arche on second, Megan Runyan hit a double deep into left field and earned two RBIs, Devine 4, Carrizo 1. Top of the seventh, two outs, Jessie Ramirez on third and Runyan on first, Allison Taylor hit a triple to center and J. Ramirez and Runyan score. Taylor then scored after an error by the catcher while Mackenzie McClellan was at bat. Devine won 7-2.
Ortiz 1 hit, 2 RBIs. Jeanette Rios 1 run, 1 hit. Kendall Arche 1 run, 1 hit. J. Ramirez 1 run, 1 hit. Runyan 1 run, 2 hits, 2 RBIs. Taylor 1 run, 1 hit, 2 RBIs. Mackenzie Schneider 2 hits. Isabella Gutierrez 1 run. Wofford 1 run. Pitcher Isabella Gutierrez threw 54 strikes in 88 pitches and allowed 5 hits.
The Varsity Arabians are 5-1 in district with only two games left. They will play at home on April 12th against Crystal City and then in Pearsall on April 16th.
By Dicy Chambers
Sports Writer