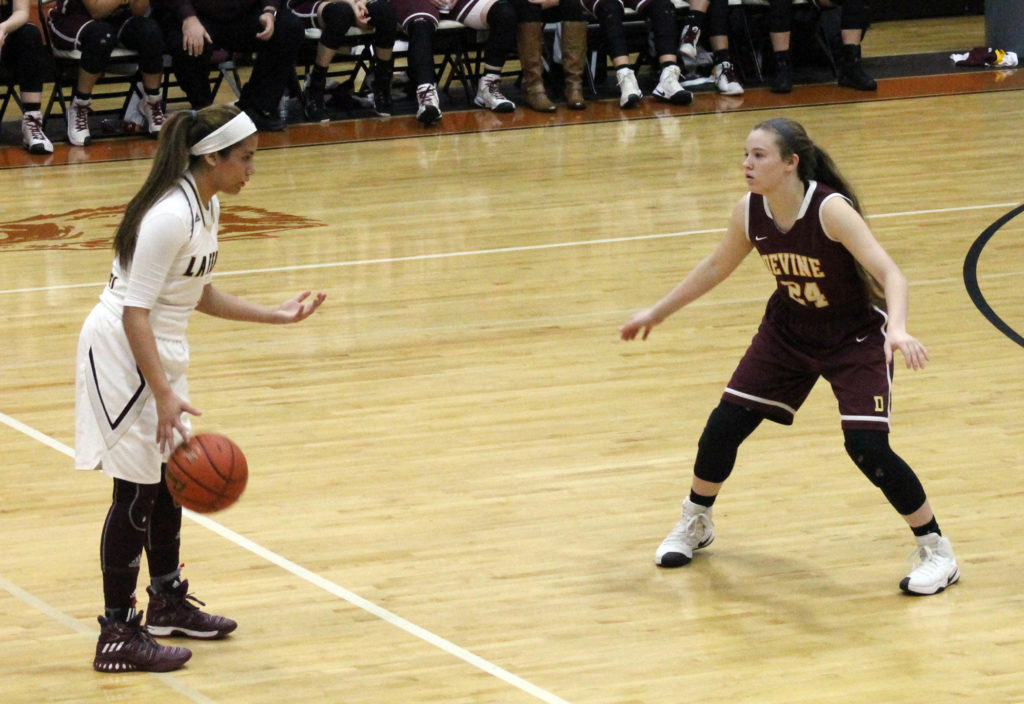 For those thinking that the Devine Arabian defense couldn’t possibly get better after holding the Poteet Aggies to three 1st quarter points in the bi-district game, think again. The Arabians continued their defensive dominance against the La Feria Lions in Friday night’s Area playoff matchup in Alice. Devine held the Lions to two first quarter points while scoring 14 of their own to cruise to a 52 to 30 victory. This win set up the Arabians Regional Quarterfinal matchup with Corpus Christi West Oso that will have been played Tuesday night in Falls City (results of that game will be in next week’s Devine News).
“I can’t say enough about how this group of girls continue to prepare to be their best, especially on the defensive end of the court. We are turning steals into nice transition opportunities and capitalizing on other team’s mistakes on points off their turnovers,” stated Head Coach Jim Sessions. “This success that these young ladies are having is not by accident as they prepare diligently for every team that we play.”
Defense is typically the key to any championship victory. Devine holding a team, La Feria, that went 13 and 2 in their own district to 30 total points for the ballgame shows the commitment that Coach Sessions team has made to playing on that end of the court. The Arabians built their 14 to 2 lead into a 28 to 10 advantage at halftime. Their lead increased even more in the 3rd as Devine scored 16 points to La Feria’s 7 to take a 46 to 17 margin into the final 8 minutes.
Devine shot 18 of 37 from the floor for 49%. More impressive, the Arabians cashed in from outside hitting 7 of 13 3-pointers for 54%; how about that? The Lions managed only 12 of 43 from the floor for 28%. The Arabians turned 18 La Feria turnovers into 22 points and led in the assist column 12 to 0 over the Lions.
Vanessa Oyola led Devine with 22 points, 2 rebounds, 4 assists, and 1 blocked shot. Six other Arabians made the scoring column with Jenna Sadler netting 8 points, 6 rebounds, 2 assists, 1 steal, and 1 charge taken. Julia Harrell had 6 points, 4 rebounds, 2 steals, and 3 blocked shots. Preslee Quisenberry tallied 6 points, 3 rebounds, 4 assists, and 1 steal. Chesney Friesenhahn had 5 points, 2 rebounds, 1 assist, and 1 steal. Ariel Lopez finished with 3 points, 1 rebound, and 2 assists. Rounding out the scoring was Tori Martin who had 2 points to go along with her 2 rebounds. Stephanie Campos and Lily Stricker also contributed in the Area Championship victory.
If the Arabians won their game against West Oso Tuesday, their next contest would be at the Regional Tournament on the Texas A&M Kingsville campus on February 24 versus the winner of the Boerne/Sweeney game. Time TBA.